Hey! As promised I would come back and tell you about the two parties I attended last night.
The first one was a private one at a friend's house, which was really cozy. We had lots of good conversation, drinks and even ended up listening to 00's hits! Really fun.

At midnight we arrived at the main attraction of the evening: The BDSM / Fetish event at Det Akademiske Kvarter. They had 4 floors of things that were happening (concerts, lectures, exhibitions, etc), but I wasn't really interested in that. I was very curious when I saw that THIS was happening in Norway! If you don't know, I've gone to a bunch of fetish parties, mainly the yearly one during WGT that I am a walking act in. I didn't think it was going to be like that. Norwegians are shy pussies!
So I decided to wear a censored outfit (it was fucking snowing anyway). I'm glad I did, cause the event was honestly pretty tame. Sure there were bare-chested guys in collars and women in corsets and boots, but not much more ''freaky'' than that.

On the top floor, which was 20+ because of liquor serving, there was a room where we THOUGHT they were having a show, since tons of people were gathering in the room. There were a few pieces of play furniture in the middle of the room, and not much later a dominatrix and her slave started playing. She gave this big strict speech about no phones (duh), and then carried on. Within few minutes lots of people were playing. More and more people gathered, and even stood in front of people who were sitting. Rude! After a while I realized this wasn't a show, it was just regular people playing! But I guess to norwegians that's something crazy and new you have to watch.

What I am used to is that stuff like this happens everywhere during the parties, and nobody really bats an eye. Often there are also private areas. But this event last night had no nudity and no sex (shocker; fetish party doesn't necessarily mean sex party). I figured anyway, cause anyone could get in for as little as 50 NOK (as long as they were of age, of course). They had a lot of security on the house (usual thing at that place), but it still made me feel a little.. I'm not really sure. I just feel like this way people might be like ''Oh look at the freaks!'' whereas at a real fetish party EVERYONE is ''dressed'' (read: not dressed LOL) appropriately (you won't get in if you're not) and are a part of it. You can just be yourself and no one will judge you! Not even the 60 year old naked dude will be looked at in disgust.

So yeah, I guess that was all I had to say about the event! Not that satisfied, but at least they made an effort, you know. I wish norwegians would be more open to this stuff! I have been thinking of writing a big informational post about fetish parties and also the misconception that all goths are sluts who like freaky sex. Not true, people! And someone with experience from both the fetish and goth scene needs to tell people that. So we'll see when I bother to do that. This will have to do for now. If you have any questions, just let me know! 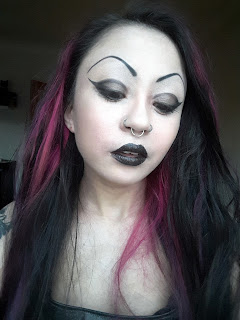 My make-up yesterday, for the first time in a while. 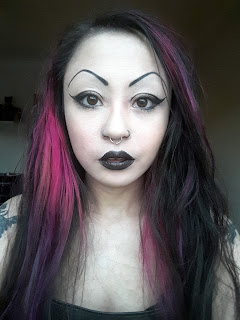 Don't mind my eczema (it's healing) 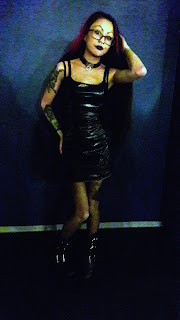 I forgot to get a photo of my outfit before this, which was a simple black sweater buttoned at the chest, Mayhem's De Mysteriis Dom Sathanas shirt, ripped baggy black jeans and fuzzy purple kitty socks. I decided to just wear the fetish outfit with leg-warmers, a hoodie, coat and my everyday boots so I wouldn't have to change THAT much. I'm lazy that way, okay.

So yeah, that was it! Have a nice sunday and see you soon!
Posted by Caroline Åsgård Skulstad at 2:11 PM