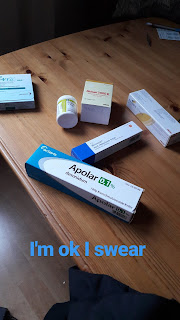 Hello! Just wanted to do a casual life update. I did say in a post not too long ago that I'm not doing much stuff lately. I'm not. This last week has been eventful though! I've already blogged about the parties I've been to.
Other than that I'm just sitting around at home. I am now reading Merrick by Anne Rice.
Lately my body has been hating me a lot. I'm low on folic acid and D vitamin (16, apparently 50 is low), so I now take supplements every day. Also my eczema just didn't want to heal, even got worse, so I got fed up and went to the pharmacy. Shit be expensive, but it was so fucking worth it. I picked up the stuff in the photo last week, and today I woke up with my face BARELY dry. For months I've been waking up with my face so dry that once I opened my eyes my eyes would crack and bleed. Same goes for the rest of the face. Weeping wounds and constant flaking everywhere.
But these three creams have saved me! So to celebrate that I have included my face in today's outfit photo:

While I think it's boring to show my bare face and hair in a bun, the main reason I never show my face on my blog is that my face has been in such a terrible state. It really bugs my confidence level, and now I don't have to worry about that! FINALLY. So I will continue to use these creams. Sadly I think that EVERYTHING I try for eczema, my skin gets used to, and it stops working for a while. Let's hope that doesn't happen this time. I want to wear make-up again! I've been wearing make-up tops once a week (probably less) the past few months, and every time I can basically remove the make-up by gently pulling at the loose skin. That did happen on saturday, but it seems to be much better now already. I'm so happy! 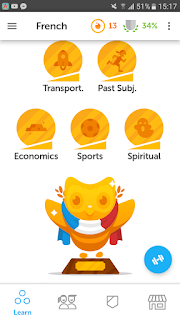 Yesterday Didrik came over, mainly to give my boyfriend a silk poet shirt with TONS of ruffles! I'm jealous, I want one. At the end of the night me and Didrik were sitting on our phones on Duolingo. He was doing german and I was doing french. I've been ALMOST at the finish line for several days now, but I wanted to drag it out a bit and repeat stuff so I remembered things better. And earlier today I finished it! TADA. This is the second language I complete on Duolingo, the first being spanish.
French used to be the only language I JUST. COULDN'T. UNDERSTAND. But now I've gotten pretty good at the exercises in the app! So I basically learned it cause I'm stubborn as fuck.
You probably know that I speak three languages fluently, and can understand a bit of several others. So now I have TWO languages I have basic knowledge of that I can add to the list!
My prize for completing french is to start learning german, cause it's so much easier. Hold your horses, before you say anything, german is often very similar to norwegian (as well as the fact that I'm a fucking linguistic genius lol), so I have an advantage there. It might also come in handy during Wave Gotik Treffen in june! I've usually never needed to know it while there, and I've understood the few things like road signs / directions and such, but if I learn enough it can open up more events for me.

That was it from me! I will be back.. most likely on wednesday. Tomorrow is me and my boyfriend's first anniversary, so we'll be celebrating that. Maybe I'll tell you our story! See you then, bye.
Posted by Caroline Åsgård Skulstad at 6:41 PM