Heyhey! Me and my boyfriend Simen have been together for a year now! That went really fast. I'll start with telling you what we did yesterday, then I'll get into our story or something like that. 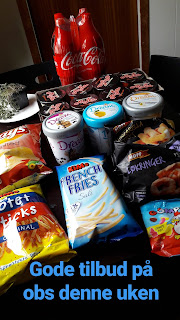 Early in the morning I had an appointment with my psychiatrist, and he drove me like he usually does. After that we went grocery shopping. That particular store chain had lots of sales on junk this week, but we did buy some real food, I swear. 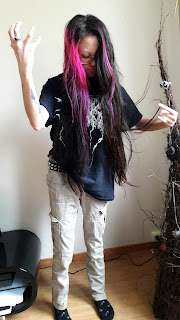 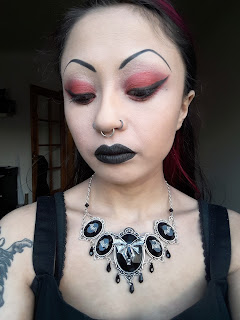 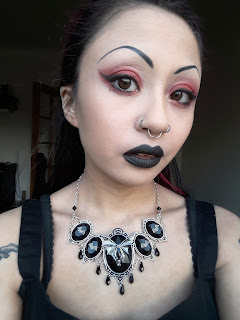 It's so nice to be able to do make-up again!
My skin is still slightly dry, but oh well. 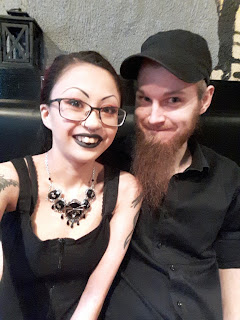 We never take selfies, but since it was our anniversary, we had to try. He accidentally trimmed his mustache too much, so to me he looks kind of weird here! I'm used to my hairy man, hahah.
We went to Inside Rock Cafe, which is where I used to work, for some food - Their food is delicious. We got some chicken fingers for an appetizer, and then Stargazer burgers for the main course. Inside has their own magical mango dressing which is SO delicious! The Stargazer is just a normal Inside burger, just with bacon. Gotta have bacon! We were so full that we couldn't move for a while.
After that we went home and went on with our lives, haha. We're just people who don't do much, and prefer to stay inside. But it was nice! And I guess when you live together, you're just used to that normal domestic life - Things aren't so exciting anymore, but we're fine with that. We just like being weird together. 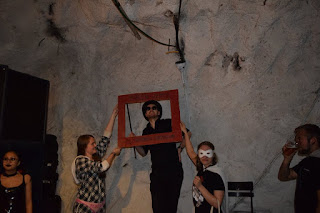 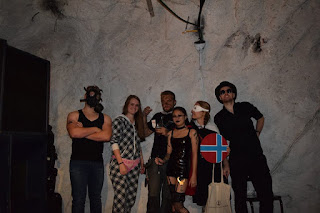 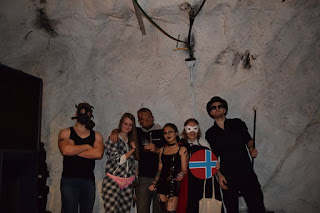 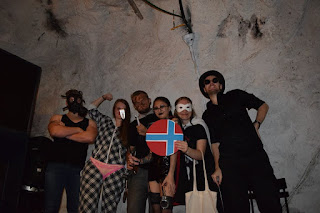 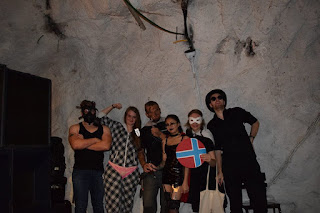 So, how did this come to be? Well, he moved to my city in september 2015, and started working at the bar / concert venue Hulen, where I had been working for two years already. In the photos above we hadn't even talked yet! This was the first staff party he attended, a superhero and villain theme. He was getting some pictures taken, and then I wanted to get some too! This is hilarious to look back on.
We probably worked together for months without really talking - I don't remember except for one time when after work he made me record myself saying in a little girl's voice: ''I'm going to kill you in your sleep! *giggle*'' on his phone. He still uses that as his alarm, it scares the shit out of me.
Then we had the christmas party at Hulen, where I was pretty drunk, as you do. I remember talking to him a lot, and I liked talking to him, but I basically forgot everything - and he was too shy to say anything after that. Last summer I realized that someone took a photo of us that night! 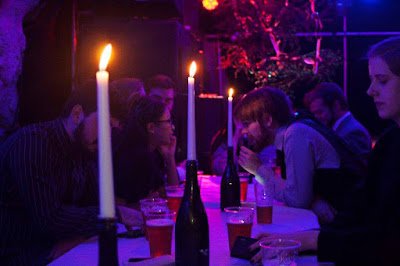 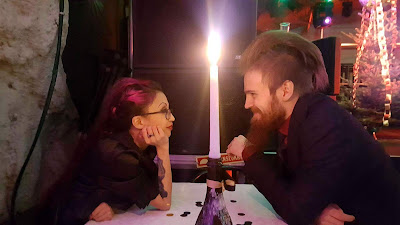 Nothing really happened until one day we had this mandatory safety meeting or something there. I was talking to people, and I noticed he was wearing a Voltaire Raised By Bats shirt. I said I liked it, but he didn't realize I actually knew who Voltaire was. The day after I think I sent him a message on facebook: ''Thanks for giving me something to listen to!'' and after that we never stopped talking. We were constantly snapchatting and talking about anything and everything.
I think a couple of days later he was going to Hulen, and I decided to tag along. We ended up just sitting on a couch talking instead of watching the concert that was going on that night.
When it closed and we stopped where we were supposed to go our separate ways, I just said: ''You know what, we're not going to stop talking, so wanna come to my place?'' and we sat there, drinking Jäger and talking about goth stuff until morning.
I think we did this again, (I believe we watched tons of movies) and that time I was so tired that he carried me to my bed. He was so awkward and unsure of he should leave or not that I just dragged him into my bed so we both could sleep. The day after I kissed him, and we both just let out this HUGE ''OMG I'M SO GLAD THAT WAS OVERWITH'', cause those past days we had both been really unsure. Glad that I'm slightly more brave than him and took a chance! A couple of days later we made it official. Basically everyone we knew were super shocked, cause it happened so fast. It did, but it felt so right! 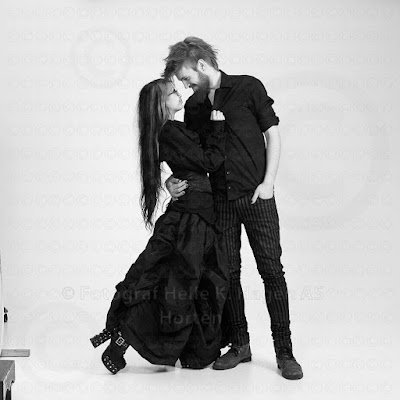 Then the months just flew by. We learned from his parents that as toddlers we actually lived MINUTES from each other! But then his family moved pretty far away. I'm so glad he decided to move back! Totally meant to be yeah.

In may I went to Wave Gotik Treffen, and I made sure to see Voltaire live, since he had said ''He's playing the biggest goth festival in the world'' that first night we spent time together. I was like ''Dude, I'm going to that! I've been going for a few years now''. When Voltaire finished his show, he said he was going to be in the merch booth so I RAN over there. I started filming and told him that he was basically the reason that me and my boyfriend were together, and asked him to record a video message for him since he wasn't there. He was so drunk that he put my camera into his mouth, and recorded a funny message for him. I also bought some merch for him. I skyped with him, and didn't say a thing, only that I was excited, and slowly started showing him pictures and videos from the concert, then the merch.. then my signed WGT program (this is when he realized I met him)... and then the video. He was SO shocked! So we were both really happy.
Funny, he kind of returned the favor during Yule, cause we had been to a Enslaved concert, and he had went to the toilet, bought a shirt, given it to someone who went backstage and got it signed after the concert, who gave it to someone else who gave it back to my boyfriend before we drove down to his parents for the holidays. When we got there and I went to the toilet, he gave it to his mom to wrap. I was SHOCKED.

In june/july I was in the Philippines (first time visiting my family there in three years), so I spent some time away from him again. It was hard, but I guess it made our bond stronger and all that.
During the summer we realized that he had always spent so much time at my place since the start (the times he went home I came with him anyway), that he would move in. So he officially moved in on august 1. I have to admit that was kind of scary, it was a big decision and was kind of fast, but I'm so happy he did. Considering the accident that happened in october (if you know me you know what happened, it's a long and awful story), I don't know what I would have done without him. He's been an amazing support to me, and taken care of me at one of my worst times. Oh now I'm getting emotional, let's move on. 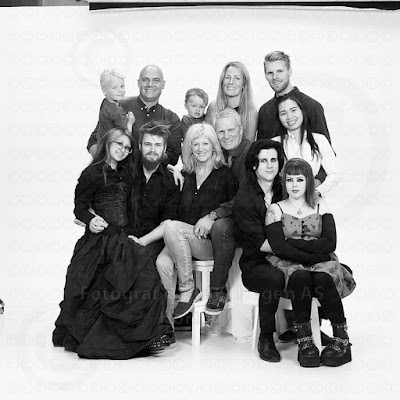 And so our life together continues. I have gained an amazing and lovely extra big family through Simen. Even though all of them live far away I've already met them several times, and it's so much fun! His brother and his girlfriend (bottom right) are coming with us to Wave Gotik Treffen this year, it's gonna be so much fun! It's amazing that I'm gonna share the highlight of my year with them.

I think that's it! This was so long, and I'm sorry if that was boring. I'm not a person that likes lovey-dovey stuff in social media and such. But I do love this man very much and I look forward to the rest of our time together; all the days of normal life, fun adventures, ups and downs and just going through life. We have actually never argued so far, which I find kind of weird. We have our differences, but we respect each other and help each other improve and grow as people. That's what I think is important in a relationship.

So that's our story! Thank you if you have gotten through this far. I thought I would share such an important part of my personal life with you, and I hope it wasn't too much, haha. Until next time, spread the love!
Posted by Caroline Åsgård Skulstad at 4:10 PM