The bar I used to work at where me and my boyfriend met is called Hulen - The Cave, cause it is a cave. He still works there as a janitor, and it was their turn to arrange this month's staff party. They picked an excellent theme: serial killers! I immediately thought I would go as Elizabeth Bathory (on the day I found out I was wearing a similar outfit). I haven't been to a staff party there in AGES, so finally a fun one I could go to! Here are some pictures I took: 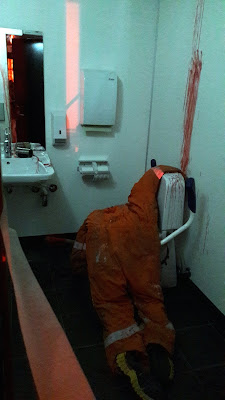 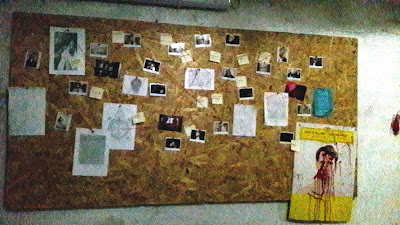 A board of clues to find out which janitor committed the murder! 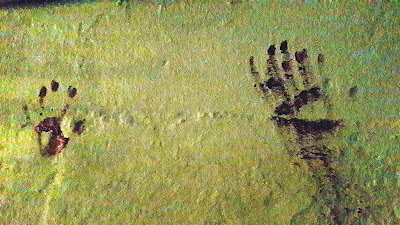 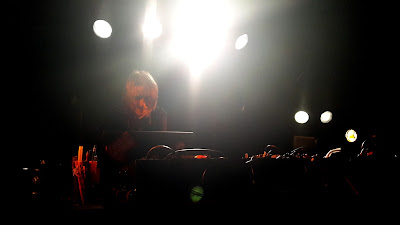 My boyfriend's best friend Isak was the DJ - and a great one at that! He played TONS of goth music, so I found myself on the dancefloor for most of the night, even though I was the only one there at times. It's rare for me to hear music I like at clubs, so I didn't care, I had to enjoy it!

As well as a murder to solve, there was a quiz about serial killers. My team (the people with the red right hands) won! Even though we sucked, but the others sucked more, so HAH. Thanks guys! So we won a bag of chips and some candy.
My boyfriend was announcing the winners on stage, and I couldn't believe he meant me when he said my name for who had guessed the right killer. I won a movie ticket! I think I only won because I'm obsessed with Nick Cave's Red Right Hand. I immediately asked Isak if he was going to play it when I came. One of the clues on the board said ''He did it with his red right hand'', and one of the janitors, Ørjan, DID have a red right hand! He touched my face with it. And it was right! Apparently another clue was that in the crime scene, there's a cup on the sink, and if you look in the mirror, you can see his name on the cup. But I'm blind, so I couldn't possibly have seen that. Anyway I'M DA MAN.

They had also set up a little crime scene (though I said: it looks like a normal day at work for you janitors) where you could take photos! They didn't have a photographer for the evening, but one of the janitors (dressed as leatherface) had a polaroid camera. Here's the pictures I took with my phone! 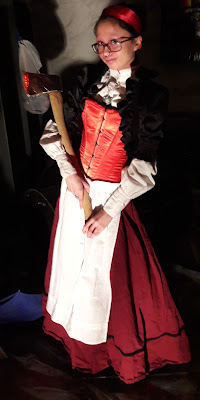 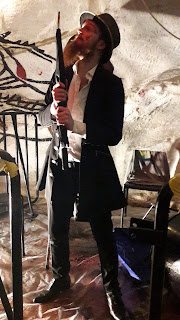 My boyfriend in his killer costume! 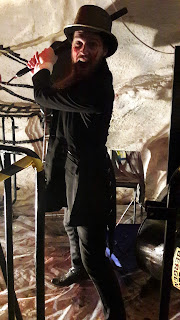 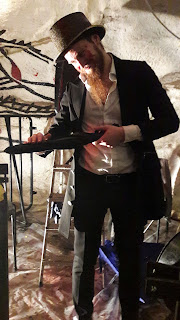 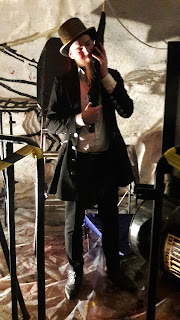 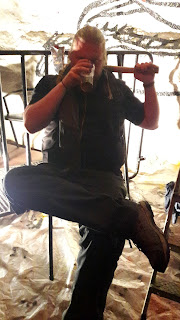 Didrik being his normal viking self.

I had an awesome time! I love it when people make an effort with parties. Great theme, great decorations, great activities and of course; great music! I am going to a couple of parties on saturday, so my next post will probably be about that! See you soon.
Posted by Caroline Åsgård Skulstad at 12:54 AM