Hey! It's been kind of quiet on the blog the past week, because I haven't done anything, so I haven't had anything to blog about. I didn't even do something when my boyfriend hasn't been home!
But I have been feeling kind of down. On the 8th it was a year since the drummer in my band died. That is the closest death I have experienced. I put on all the music I connect to him, and spent hours crying, letting it all out. That helped a lot. The coffin necklace I'm wearing below actually contains a petal from the rose I put on his coffin. But let's not talk more about sad things.

Yesterday we had a spring cleaning in our apartment, it felt so good! We even got rid of a bunch of clothes. Most of it we donated, but some of the more alternative stuff I've put up for sale in this norwegian buy / sell group for alternative clothing, if anyone is interested.
Afterwards my boyfriend surprised me with a chocolate chicken full of smarties, hahahah. Oh and by the way, he is now officially a fully certified security guard! No surprise there, he's a workaholic.

I thought with this post I'd just update you that I'm still alive, and show you what I've been wearing. The past days I've been listening to a lot of music, so I'm going to make a playlist to post on here.
I'll probably post that in a couple of days, but for now enjoy these casual but still alternative outfits! 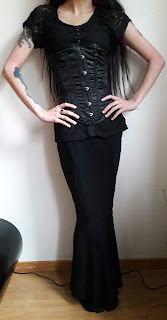 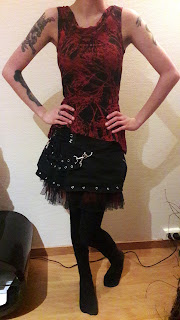 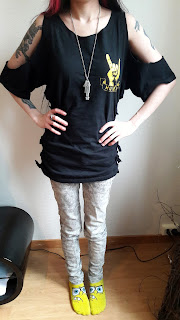 Oh, and I actually made a make-up video on my neglected channel! I was really bored, and it went to shit because my skin is stupid, but oh well, maybe you guys will enjoy it anyway! Purple <3
For more information about the look, pictures and all products used, go to my make-up blog!
Posted by Caroline Åsgård Skulstad at 11:17 AM