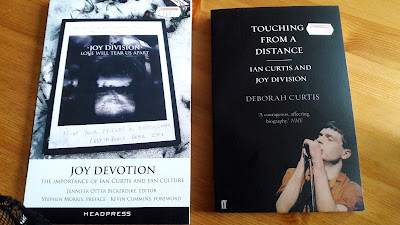 I couldn't believe it when I found these two books at the record store! They were really cheap too, so I had to buy them. Joy Division isn't something I put on often or recommend to baby bats, as you have to be in the right mood, and are really hard to get into. But as I listen to them now, singing along, I do love them. There's lots of bands that I love, but rarely am in the mood to listen to. 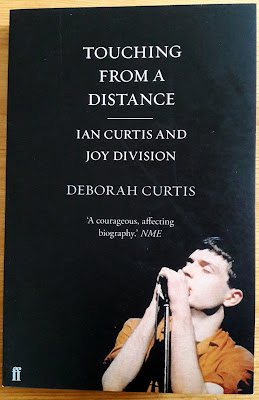 TOUCHING FROM A DISTANCE - IAN CURTIS AND JOY DIVISION


This book is written by Ian Curtis' wife, and she has interviewed several people who were close to him and included their quotes in her writings. She tells his entire life story, mostly from her own point of view. Even though she has asked other people, the story still is very short and seems incomplete. For obvious reasons though, as nobody really knew what was going on inside his head. All we have are his lyrics.
While she tells what she can of the band's career, she was excluded, so this book doesn't really tell you much about the music or the band members and stuff like that you might expect. You get to read plenty about Ian and Deborah on a personal level, a lot of it is pretty shocking. Everyone looks upon him as a god, a tortured soul and all that. Even though the movie Control (2007) shows some of the ugly sides, this book gives you a lot of it. I knew I would be sad when reading this book, but not shocked and angry! I feel really bad for Deborah (and Natalie).
Almost immediately after his suicide the story ends.
But we're not finished yet! The end of the book lists Joy Division's entire discography, lyrics (Warsaw, Joy Division, unfinished and unseen), a list of all the gigs they did.
Bonus, the middle has a glossy insert with 16 nice photos! The rest of the book feels like the typical 90's paperback, you know, when the paper is kind of rough and dark?
The edition I have is the 2014 reprint (this book was originally published in 1995) with forewords by both John Savage and Stephen Morris.

I read it pretty much in one sitting. It's only a little over 200 pages, but I wouldn't say it's the lightest read. Therefore I would only recommend it for big fans, and of course, if you can take the sadness of it all. That and it's not so much about the music and band itself. So if you are a Joy Division fan, I definitely recommend picking this up! Great to have in your music book collection. Click here to buy it.


The title of the book is taken from this song. 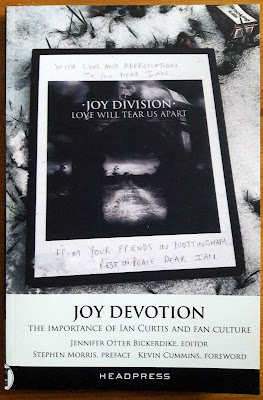 JOY DEVOTION - THE IMPORTANCE OF IAN CURTIS AND FAN CULTURE


This book is written by many people; fans, lecturers, etc., but is edited by Jennifer Otter Bickerdike. We hear tons of stories about how Joy Division has affected people's lives all around the world. Since several of the contributors are academics, their contributions are pretty much small essays, and can get dry to read. But there are some parts written in a very casual way as well, so be aware of that. You will find writings about how the scene in Manchester and around there was at the time, both musically and society in general, and why the scene pretty much died later on.
There is lots of talk about Ian Curtis' grave, how it is treated, and the tourism in Macclesfield after his death. There are also interviews with some people who went to the legendary Joy Division concert on april 8th 1980! You'll read about a graphic novel and play about the band, a beer called Unknown Pleasures, the movies where Ian Curtis is revived, tribute bands and much more.
It also includes a very in-depth discography, and an insert in the middle with tons of color photographs from Ian Curtis' grave. The book has lots of photos, but in black and white.
Preface by Stephen Morris and foreword by Kevin Cummings, published in 2016 in various formats.

The book is barely over 100 pages, so it took me the duration of Unknown Pleasures (collector's edition) and Closer to finish it. I have to admit some of the parts in it were very dry. But I did enjoy most of it, reading about how the band has affected people and how the scene was at the time.
But I still feel the book is missing something. I can't quite put my finger on it, whether it is the academic approach to some of the content, the multiple contributors writing very short texts each, or if it's something else. I'm not sure what I expected, but this wasn't quite it.
I would only recommend it if you are a big fan of Joy Division, and definitely if you're the type who would write about them at university and likes that kind of reading material. Click here to buy it.

My favorite Joy Division song, probably. It's not on Unknown Pleasures, so wrong art.

I'm not going to tell you which book you should get if you were only to get one or anything like that. I think I favor Touching From A Distance more, since it's actually about Ian Curtis and Joy Division more up close, which is usually what I like in music books. But I do like reading about how local scenes used to be like then versus now. Us fans are incredibly important, and I love how much music can affect us, accompany us and help us. Especially us in the alternative scenes, it affects our lives greatly, even though the music can be older than ourselves. Because of it we connect with other people with the same tastes all over the world, and can meet at festivals in other countries, acting and dressing in a similar way.  It's amazing.

Have you read these? What did you think? If not, will you? And have you read other books about artists and their respective scenes? I would love some recommendations!
Posted by Caroline Åsgård Skulstad at 9:00 AM