Floodland - The Sisters Of Mercy Review 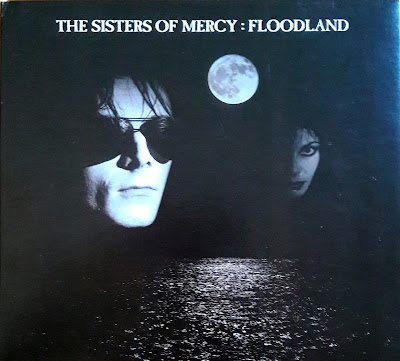 Okay, moving on to 1987, to SoM's second studio album. Everyone except Eldritch had left the band after the last album was released, so Eldritch got Patricia Morrison to join him. Now, I don't know the truth, but he claims she basically didn't contribute at all to the album (while she says she did, but he recorded over her parts), and basically was just a model (just take a look at all the photoshoots, music videos and other appearances the two of them did). I think she DID contribute, but the booklet doesn't say shit, and on wikipedia is says that she played bass and vocals. I want her to write a book sometime and tell the truth about this - and talk about all the other bands she's been in - especially The Damned!

This is the first (studio, at least) album I got by Sisters of Mercy. It's pretty iconic, and very classic goth rock. The cover art, how Patricia Morrison looks... And it has some fantastic songs. The album title is pretty fitting, as water is mentioned a lot in the lyrics of the album. This time around I will review the bonus tracks I have on my 2006 reissue CD, as I adore those too. So let's have some fun! 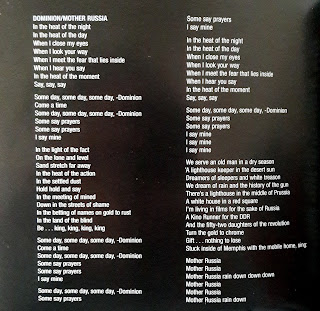 Dominion / Mother Russia
An instantly recognizable song, and one of SoM's most famous songs. I love everything about it! The beat, the twinkly guitar, the vocals... I always sing along to this. Plus it has a saxophone solo!
Then it goes over to the Mother Russia part, which is pretty cool. It ends really well too. 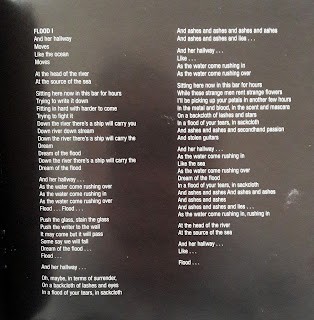 Flood I
A fitting title, cause it really has a flowy, watery vibe if you can say that! Eldritch's voice really contributes to that feeling. Eldritch says the word flood is a metaphor for sex in the two songs, but I try not to think of that, I just cringe when I think about the sexual references in goth songs. Anyway, the instrumentals in this are pretty different, very electronic, I don't really know how to describe it. But it contributes to the atmosphere of the song. 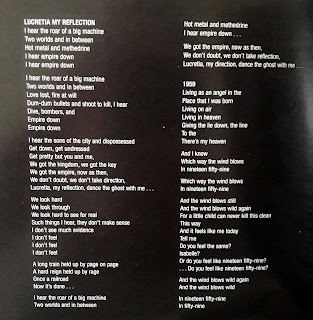 Lucretia My Reflection
Like Dominion / Mother Russia, instantly recognizable, and one of their most famous songs.
I should never have watched the music video, cause my head always twitches sideways at the thought of that thingy (I don't know what it's called, okay) that is shown at the beat of the snare drum.
Eldritch wrote it about Patricia to welcome her into the band, because he thinks of her as a femme fatale, as Lucrezia Borgia is said to have been. I like the lyrics a lot, I always have to sing along to it! And dance after ''dance the ghost with me''.

1959
A calm song about Eldritch's birth year. Beautiful and sad.
Though I feel the piano could have been better, it doesn't really sound that good. 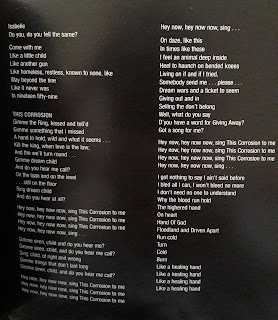 This Corrosion
Then we're lifted up into another classic SoM song! I love the vocals in this, and can never decide which to sing along to, haha. It's so fun and dancy! The lyrics are kind of silly, but they're meant to be a parody of Wayne Hussey's lyrics, which can be pretty.. cliché. I still love it (and The Mission)! Excuse me while I break into song and dance for the next 10 minutes. Good guitar solo too, btw. 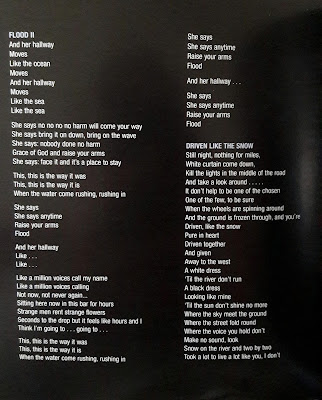 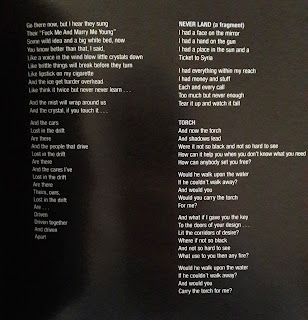 Flood II
A continuation of Flood I (duh). This is more upbeat, and more.. singable, I guess. I like this one much better, it's a nice part two. Fades out into the next song pretty well.

Driven Like The Snow
It has a one minute long pretty quiet intro, before getting into a pretty groovy beat. Eldritch says this is kind of a part two of Nine While Nine. Musically it isn't as good, but lyrically, it's much better. The lyrics aren't so gooey, they're actually pretty okay. Couldn't he have just merged the two?

Never Land (a fragment)
A very atmospheric song. The drums are strong, but it's still very calm. I don't know what makes that sound (you know what I mean), but it's pretty cool! It gives that extra oomph. A pretty cool piece. I remember this song was featured on the Hotel season of American Horror Story, along with a bunch of other gothy music. On the vinyl, this is where the album ended. 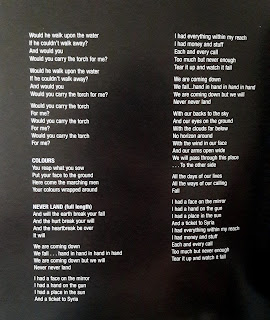 Torch
Another calm and atmospheric song - It kind of has that aquatic feeling again. I really like the lyrics. Again it has this weird sound that I don't know what is, that gives it the little extra. But yeah, a beautiful (and probably underrated) song.

Colours
Another atmospheric song that's pretty calm. The drums are a little more upbeat, and it features some really cool synth. I've zoned out completely while listening to this now. Then it fades out to nothing. On the original CD this is where it ended. A pretty good ending, I have to say.

Never Land (full length)
And now we're back to Never Land. This version was previously unreleased until the 2006 reissue CD. You're kind of floating in space in this song, and I think that's what Eldritch meant by this song. 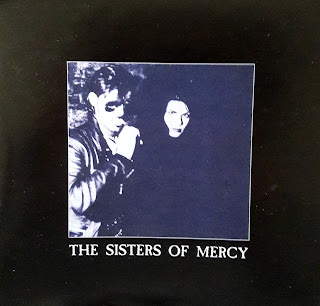 Emma
A seriously underrated song that I adore. It's so beautiful and sad. The instrumentals go really well with it, and it's overall really well made. The emotion in his voice, especially towards the end is just perfect. It's originally by Hot Chocolate, which is good, but not quite my kind of music (and it's definitely not sung with feeling there). 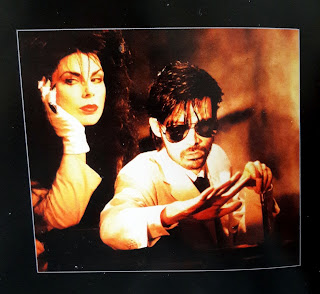 So that was quite a journey! The majority of this album is pretty atmospheric, but it also has some of SoM's most famous songs, so it's a pretty well rounded album of dark music. This is the first SoM studio album I got (I'm not sure if I got A Slight Case Of Overbombing before this), so I'm kind of emotionally tied to it. Fuck it, I'll say it; It's my favorite SoM album! I think most people like FaLaA the best, and it's good too, but I just have to say that this is better. What kind of sucks with SoM is that they only have three studio albums, but they have so much more material than that. Luckily they have compilation albums (I still need to get Some Girls Wander By Mistake!). I'm a studio album person, so it kind of annoys me when bands don't put all their stuff on albums (I'm looking at you, Joy Division / New Order!), but with Sisters of Mercy it's fine, since it's not THAT much.

Those were my thoughts, and I'd love to hear yours! I love hearing people's special relationships with music, from how they discovered it, to what they associate it with, and other things. Music is a huge part of my life (I guess you can tell from the amount of album reviews I've done now), and I love to share it with other people. If you haven't heard this album yet, do it now! It's definitely a classic in the goth community. If you're getting into Sisters of Mercy, maybe the compilation albums are good as a first taste of them, but I'd say if you can, get all of them! Cause you're gonna get hooked - I definitely did. SoM is probably my favorite goth rock band, mostly because I always sing along to their songs. Sure, many bands have that atmosphere that gives me that certain feeling I associate with goth, but if I can feel it, dance to it AND sing to it, perfect! And that's what Sisters of Mercy is to me. 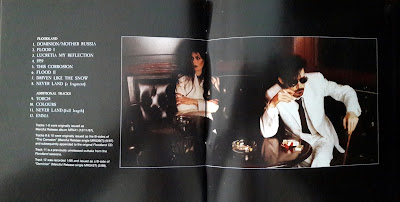