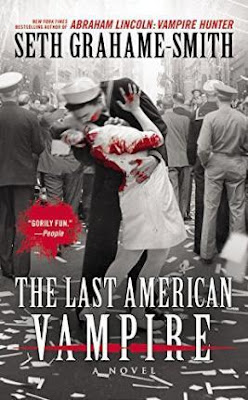 I really liked Abraham Lincoln: Vampire Hunter, so when I found out about this, I put it on my want-to-read list! My awesome brother-in-law got it for me for Yule.

I didn't expect to love this book as much as I did, since I felt Abraham was the reason I loved the last book. But if you love vampires and history, you'll love this. This book is kind of written like Interview With The Vampire (it's even mentioned); it's Henry telling Seth Grahame-Smith his life story. It changes between regular third person narration, and Henry's own thoughts - They are clearly separated, so you won't get confused. Henry was born in 1583, so there's A LOT to cover in just under 400 pages, which Grahame-Smith somehow manages to do. Of course he skips some parts here and there, and everything that happened before the last book are flashbacks.

The story starts properly shortly after Abraham Lincoln's death. Henry is sent to Europe by the Union to hunt down a murderer called A. Grander VIII. He goes back to his birth city; London - where he meets Henry Irving, Bram Stoker, Arthur Conan Doyle.. and Jack The Ripper. Not gonna tell you his identity though!  After the head of the Union is killed, Henry goes back to America, and gets a body guard. While he's out with him, he meets Nikola Tesla and Mark Twain. They become friends too, and later as Henry starts to work for more presidents Tesla goes with him to Russia on a mission. It's hard to recap everything in this book, but we see the world wars, other historical events in America in more recent times AND the time of the first English settlers. Henry was there for all of it! It was really interesting to see how Grahame-Smith again twisted history with vampire fiction.

If you liked the first book, Interview With The Vampire and Anno Dracula, you'll love this! I recommend all of these. I also watched the movie adaption of the first book again while I was reading this. I will always be a SUCKER for vampires ;) Now, off to read Dracula - AGAIN!