The Squaw by Bram Stoker Review 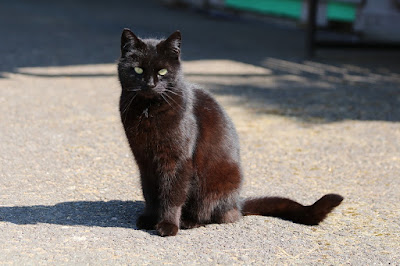 A couple is on honeymoon in Germany, and they meet an american. They visit castle Nuremberg, and on the way there they see a cat playing with its kitten at the bottom of the wall they're on. The american throws a stone, aiming for it to land next to them, but he hits the kitten and kills it. The mother is furious, but can't get to them. The american says the cat reminds him of an Apache woman he used to know, whose child was killed by a soldier - she tracked him for years and eventually killed him before the american could save him. She looked very happy, and he killed her.
The cat continues to follow them towards the castle, but the american just laughs. They go to see the torture instruments in the castle, the most famous of them the iron maiden. For some reason the american wants to be tied up and go inside, and bribes the custodian to let him do it. The custodian hold a rope so that the door slowly closes, and that's when they notice the cat has followed them. The american laughs. The cat attacks the custodian so he lets go of the rope, and the american is killed instantly. The husband opens the door, and his body falls out. The wife faints, and he carries her to a bench outside. When he comes back, the cat is sitting on the american's head licking his blood. He then takes an executioner's sword and kills it.

Ehhh... wtf just happened? Haha. First off, I find it a little weird that this newlywed couple wants another guy to join them on their honeymoon. Second, he's really annoying and obnoxious! Reading of the kitten's death is heartbreaking, and the guy just laughs about it! So I'm really glad the story he told foreshadowed his own death. The iron maiden wasn't a real medieval torture instrument though, I don't know if Bram Stoker knew that. But it doesn't matter, the american got what he deserved. Shame that the cat was killed though. The wife in this story is just completely useless, I don't even know why she was included in the story. But I have a suspicion Bram Stoker was pretty sexist - he was racist as well, so...

Anyway, it's a pretty decent story! If you want to read something else by Bram Stoker, I say give it a go. You can find it for free online, or usually in a physical copy that includes Dracula's Guest And Other Stories.
Posted by Caroline Åsgård Skulstad at 7:21 PM