I don't usually post a lot of stuff from my life, mostly because I don't think it's interesting, but let's give it a go with how I spent this year's norwegian national day! Last year we were in Germany for WGT, but I did blog about the celebration in 2017. This was actually my first national day in my bunad (our national costume)! It was kinda scary to walk around on the most crowded day of the year, but it made it fine, without any stains or losing anything! 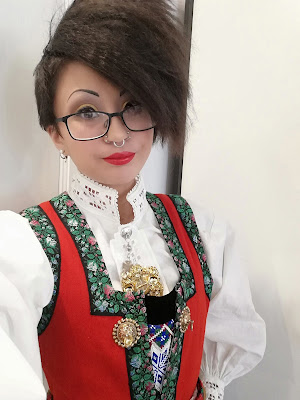 We woke up a little late, and I managed to put myself together before Simen was even ready. We headed into town and met Simen's parents and their friends. They had managed to grab the best spot at 9 AM, so we stayed there for a while! My city (Bergen) is famous for this place, it's called Bryggen. 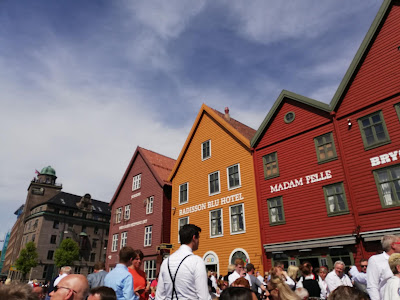 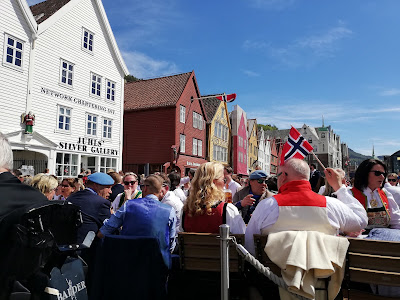 It was pretty hot, 24 Celsius! The hottest national day my city has had in 20 years. So us walking around in wool outfits were extra hot! As an adult I think one of the best things about this day is to look at all the beautiful bunads people are wearing. It usually represents where you and your family are from, so in bigger cities you see more of a variety, as well as more of specific types from the area. After a while we gave our table away and sat inside the lobby of the hotel they were staying at. Later me and Simen went home to change. A bunad is a wonderful costume, but it's an ordeal to put on and wear! So taking it off feels really nice. I decided to change into my cheap children's version for the evening (you can see a full photo of it in the 2017 post I linked at the top). 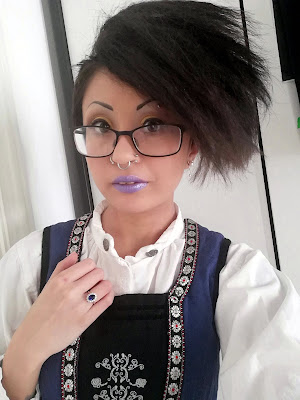 Gah, the top of my hair had fallen down (it's too long, gonna go get it cut tomorrow) and I picked the wrong shade of blue lipstick, but oh well. We went to a restaurant called Marg Og Bein (marrow and bone), and I tried the braised ox cheek, and it was seriously the most tender meat I have ever eaten - you could eat it with a spoon! Finished off with a chocolate parfait. Afterwards we split up; Simen went to work, the others went to their hotel and I went home, cause I didn't feel like partying.

The day after Simen's parents met my parents for the first time! It was about time. My parents got home from vacation in The Philippines the day before, so I haven't seen them for a while. We ate a lot of food, and it went really well! Now they don't have to meet at the wedding, hahaha.
Today has been your typical sunday, we got food delivered, washed some clothes, I did some skincare, I've worked out, and pulled out some potential clothes for WGT.
It's coming up soon, I'm so excited! I have my World Goth Day café meetup on wednesday, that's the last goth-related event before it's full-force focus on WGT!
Posted by Caroline Åsgård Skulstad at 11:48 PM