I fell asleep early yesterday evening, so I woke up to messages about the WGT schedule being up at like 5 this morning! I jolted awake, haha. Usually the schedule comes out one MAYBE two weeks before, so this is highly unusual. Not everything is up yet, but you can click every band to see when and where they are playing. Which is a little weird, since not all the bands are announced yet - we ''only'' have 160 so far! So I hope there won't be too many more amazing bands announced, cause I think I've pretty much decided now. Let me take you on my little panic decision journey!

So first I went through my entire list of bands I wanted to see, which was about 40 bands. I knew there was no way that would be possible. But I wrote down where they all played each day, and sorted them by venue. Here's what that looked like! 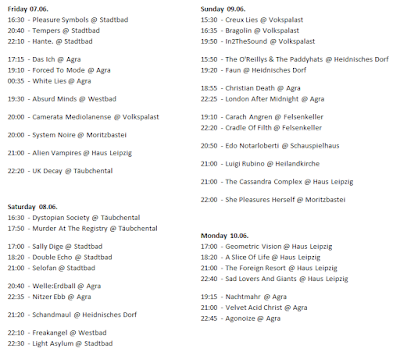 I already knew that especially the sunday would be heartbreaking for me, but there were a few surprises. I decided to plan logistically, meaning choose the venues with the most bands I wanted to see, and then add on any more I could get to close by afterwards. That way I wouldn't have to move around the city too much, and I'd see as many bands as possible. Here's what I ended up with!

I've already found some friends with the same plans, so this is going to be great.
I found out that Void Vision and Automelodi are also playing Stadtbad on friday, and I definitely don't mind seeing those! And I'm pretty sure Hante. will be done in time for us to head to Agra to catch White Lies.
Saturday I need to get ready for Obsession Bizarr and be there until past midnight, so no bands for me that day. I'm pretty sad that I won't be able to see Light Asylum and Sally Dige, they were two of my must-see bands, but alas.
So sunday I decided to go with Volkspalast, as there were three bands I wanted to see there. Pretty heartbreaking, but oh well. I added Vowws and Kælan Mikla, since they will be playing there too, even though I'm not very excited about those. Then I think I'll be able to head over to Agra to catch London After Midnight! I've already seen Christian Death, so they lost.
Monday worked out perfectly for me! Sure there were three bands I wanted to see at Agra, but I don't like them THAT much - those are just bands I like to dance to. So like last year we will be spending monday there - and last year that was THE BEST, so I'm hoping this will be too!

How did you think I did? Which bands here would you like to see? If you are coming to WGT, and you'll be where I'll be, hit me up so we can meet! There's SO many people I know going this year, so it'll definitely be hard to meet everyone. But I will try my best! Even though me and my friends might have the same taste in music, our priorities are often different. There's always clubbing too! I don't plan any of those, I just see where we end up. Now the next thing to do is to plan outfits! So weird that it's the other way around this year. I don't think I will share that on here, so you'll just have to wait and see until after I come back! I am also doing a post on WGT bands for Obscura Undead, so that'll be up soon! We'll see what I post next on here, I've got the norwegian national day on the 17th, and my café meetup on world goth day (the 22nd), so if I get pictures, I'll post about that!
Posted by Caroline Åsgård Skulstad at 11:26 AM