On may 1st I hosted my first café meetup in my city. People wanted another one, and it was suggested that we could do it on World Goth Day, which was a great idea! I didn't want it to be super close to WGT, so that was perfect. Over 40 people clicked going or interested on the facebook event, which was crazy! I think we ended up with 18 attendants, which I still think is a good turnup (we were 13 at the first one)! We forgot to take pictures last time, so when the table filled up, I asked Simen to take some photos of us! 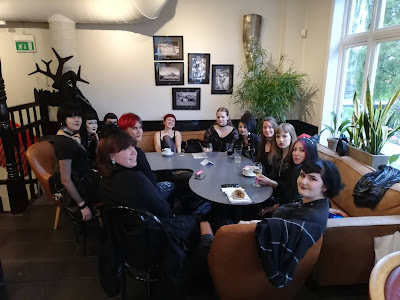 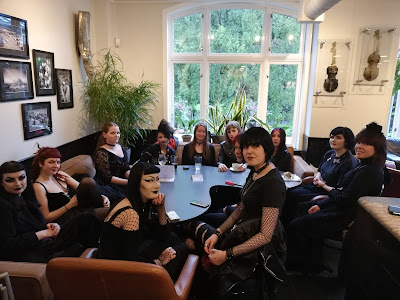 So many lovely girls! I noticed we were ALL girls except for Simen - 3 more women showed up, and two more men showed up much later. Usually you see a lot of goth girls online, cause girls are usually the ones who are the most active on social media - especially when it comes to photos. But in real life it's more or less 50/50. Not in this city, apparently! There were a bunch of men interested in the event, but most of them didn't show up.
But we were more than enough really, cause I didn't manage to talk to everyone, it's a little hard to talk across that big table! But since people came and went during, some moved closer so we could talk. The entire thing lasted from 15:00 to a little past 20:30! That's longer than last time, and if this continues to grow, it'll probably last even longer too!

So this was definitely a success. People were really happy and grateful for that I took initiative to start this. Not everyone can make it to the goth night for different reasons, so it's nice to do something during the day in a relaxed and more quiet environment.

My facebook memories showed me that I have been ''celebrating'' World Goth Day for 7 years now. But most of the times I've been all alone. My only connection to the goth scene was Wave Gotik Treffen, which is only once a year, and in another country. It wasn't until recent years I started looking for goth communities online, and I found stuff like the Cemetery Confessions podcast that made me feel connected to the scene. Last year really changed things for me. In addition to WGT, I went to Subkult and Prague Gothic Treffen, as well as other events. Late last year I found out that a goth night had popped up, and couldn't believe it! I didn't care that there were almost nobody there, I got to dress up, go out and hear music I love, as well as discover new music! Then through the norwegian facebook group I helped start the Goth Norway project, where we share events happening all over the country. Suddenly I had ''collected'' enough people from my city through various ways, and I took inspiration from my friend in Oslo who does café meetups, and asked if that was something people were interested in, and they were! And here we are now, and it's so amazing.

So to everyone who says there aren't any goths or a scene in their area; get online and look! There might be events in your area, they just might not be labeled as goth nights. Check out events and places that might attract goths, and see if you find any! But the best way is definitely to look for them online. We are SO good at sitting at home hiding, but we are most likely on social media. I found a few from here through social media, and some have even found me through my blog! See if there's a group or a page for your city / larger area / country - there usually is one! If not, start your own! When you have gathered a bunch, arrange an event! The easiest to do are daytime meetups in public, but if there's interest and either you or someone you know have the skills / experience, do a club event! It could be a one-off thing, or as often as you can do it. If you want something, the best way is to do it yourself! It will probably pay off. It's been incredibly rewarding for me! So get out there, people!
Posted by Caroline Åsgård Skulstad at 6:18 PM