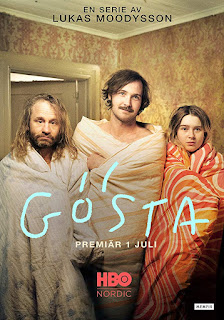 Today I'm gonna talk to you about a Swedish TV show! At first glance it might not seem super interesting, but it actually is! I saw an ad for it on YouTube a while back and heard Synir by Kælan Mikla in it and got curious. On Tuesday I finally started watching it, finished it on Wednesday, and it's pretty great!

Ok so Gösta is a children's psychologist who is the nicest guy ever, he wants to help EVERYONE, and ends up in pretty awkward situations. Everyone he knows clings to him with their (mental) problems, and it's a little annoying, but at the same time it's funny and I feel bad for him. I guess it's kind of a tragic comedy? It just gets worse and worse, and when you think it couldn't get any worse - it gets worse. No wonder all these people have mental problems! Gösta needs to realize he can't stretch himself in a million different directions and be there for everyone. I don't think I'll tell you more than that about the plot, you'll just have to see for yourselves!

What really stood out to me about this show was the music. They play Marian by Sisters Of Mercy, The Holy Hour by The Cure (not the album version though!), Follow by In Death It Ends, Lítil Dýr and Sýnir by Kælan Mikla (the latter being the theme song), a Swedish post-punk band called Makthaverskan... I also Shazamed some other songs and found out it was Intimate by Crystal Castles, and even some Soundcloud rap or whatever it's called for those who like that, as well as other genres.
Gösta's dad also wears an Einstürzende Neubauten t-shirt in one of the episodes, and it's in his car Marian is played (in THREE episodes, no less!), so maybe he's supposed to be a goth! Whoever was in charge for the soundtrack on this must be. 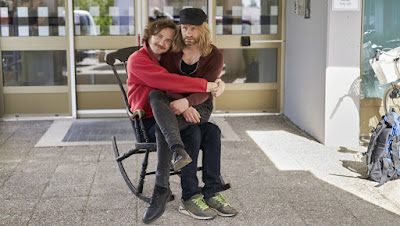 Gösta's girlfriend is played by a girl I know as Amy Diamond. I didn't recognize her at first until Mindie pointed it out, and my mind was blown. In 2005 she released the song ''What's In It For Me'', which was hugely popular - I still remember it and sometimes sing it to this day! You can hear the song playing in the background in a clothing store scene in episode 5, as a little easter egg.

Oh and literally 30 seconds into the first episode you see Gösta's penis while he showers. I find it so funny that Swedish (and often other Scandinavian)  shows and movies contain so much nudity - and I mean full frontal! Especially when you compare it to other cultures. So if non-Scandinavians who aren't used to that want to see this, be warned of that! And if it wasn't obvious yet, the show is in Swedish, but it should be available with subtitles. I also wanna give you a self harm warning for the end of episode 11, but it's very quick and not very graphic.

This is by the way the first HBO Nordic show and also producer Lukas Moodysson's first show, so that's pretty cool. The first season came out between July 1st and 29th, so it's pretty new, really. There are 12 half-hour episodes, but I don't think there will be another season. I definitely recommend checking it out if it's available for you!

Have you seen it? What are your thoughts?
I especially wanna hear from non-scandinavians!
Posted by Caroline Åsgård Skulstad at 4:02 PM