Stuff you maybe want to read.

Hello! Hope you have had a nice beginning of 2017 so far. I'm pretty satisfied myself!
Yesterday started off with going to the doctor's for a checkup - My doctor is really positive! After that I took a nap, and when I woke up I had a quick snack. Then we went out to see a bunch of my old friends! One had a birthday and one was going back to her studies in England, so it was a nice excuse to sit down at the pub. The pub was Garage, if any metalheads of you have heard of it. It was rumored that they would have to close down, but luckily they're still open! Bergen is nothing without that pub / venue. Anyway, so we were at least 12 people, and had a nice time catching up. We have all promised that we're gonna try to stay in contact better than we have in the past - Which is something I have promised myself in general, I want to be more social! I often end up like a hermit. 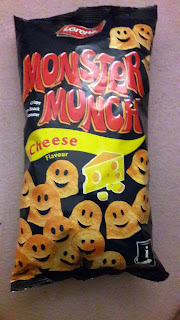 Anyone familiar with this snack? I think it's so cute!
I keep singing MonsterMash - or, well, Monster MUNCH...

Today started with more medical stuff; I had my first appointment with new treatment with a psychiatrist. I actually met this one briefly in november, when I had some so called ''acute appointments'', but I am now starting to go once a week. I am ready to give this a crack! This is the first time that something that happened triggered anxiety and depression, which was a really weird experience. Luckily I've been really well during the holidays! But I think this is gonna help now that I'm back to ''normal life'' and such, so I don't end up getting worse or just living with it for too long.

Sorry for being a little personal and serious there, but I'm not going to be ashamed! SO many things have a stigma around them, and I think that now that we're in 2017, it's time to end that.
On to something more nice! Didrik, who is sitting beside me right now, has his birthday today! Spontaneously we decided to celebrate it at our place. So we ordered pizza and are having a nice time with some alcohols. My new Marshall Woburn is coming to good use, which is really nice! 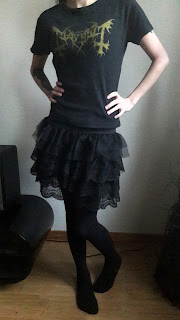 VERY simple outfit. For going outside I have worn a hoodie and maybe a leather jacket over it. But I want to show as many outfits as possible! I want to show those young people out there that you don't have to dress super-spooky 24/7 to ''be'' goth! I see a lot of kids thinking that. People somehow actually look up to me and think I look amazing, but I don't want to be one of those people kids look up to that only post pictures of themselves looking their best. I do my make-up MAYBE once a week (right now I haven't worn make-up since Yule) as my atopic eczema is mean to me, plus I'm lazy, and my hair is just.. there. I might put more effort into my everyday outfits than others, but that's just because I'm comfortable in my style. But don't get me wrong, there are tons of t-shirt and jeans days! And you will be seeing those too 😉