So to blog about something more interesting as well as letting you getting to know me better, I decided to compile a post where I list all of my body modifications! Piercings and tattoos to be specific. I stalked myself on facebook to find photos of my tattoos from when they were fresh (as those are usually the best photos of them). I won't bother to find photos of my piercings, as I find that unnecessary. My very first piercings were a couple in my lobes when I was a kid, but they were done in the Philippines with a gun and really bad aftercare instructions, so they only lasted for a couple of weeks. They seriously told me to clean with alcohol, constantly twist the earrings (didn't tell me to wash my hands) and change jewelry after two weeks. Pretty sure they were nickel too.
Edit: I forgot to mention that at 16 I got my lip pierced twice by friends! Done with fucking pharmacy needles. They didn't last long, hahah. For one of them the blood squirted and I almost fainted!
Another edit: I had my eyebrow pierced, but only kept it for a little over 6 months.

People will probably ask ''Did it hurt?'', so I'll answer it briefly; no. Getting a piercing done takes less than a second, so you barely have time to react. I think it feels like a pinch. Some might find getting the jewelry put in uncomfortable, but I didn't. I think the worst ones were my nostrils.
As for plans for more? I plan to fill up my ears, but I'm taking it slow and casual. I've also wanted dermals in my sternum and hips, but since they reject so easily I don't really think it will be worth it. We'll see. 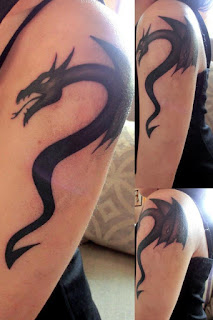 While holding my friend's hand when she was getting her first tattoo done, I booked the appointment for my first one, which was on my 18th birthday. I didn't have the idea for very long, honestly, but I felt it was a fitting first one. I had loved the comic character Nemi since I was a little girl, and wanted to be just like her - at 17 or 16 I realized I had become just like her! So I got this to symbolize that even though I've changed and come a long way in life, I am still the same person. 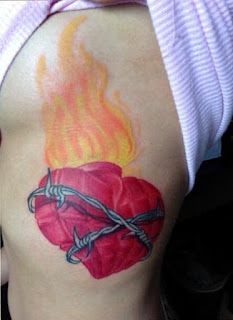 As everyone knows, after you start getting tattoos, you want more. I got this one a short while before turning 19, but I had the idea since I was 14. I bought a book in the Philippines called Heavy Metal And You, and if you google it, you'll see how similar the book cover is to this tattoo. That book got me into metal, pretty much. I had listened to metal before that, but after that book I was obsessed. I'm pretty sure the grenade texture to it came from Green Day's American Idiot. 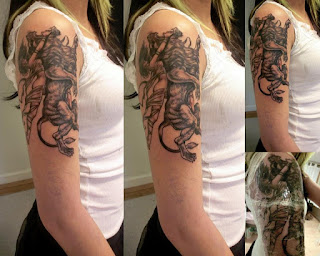 I got this the day before Samhain when I was 19. I was born on august 8th (08.08), so 8 is a special number to me I guess. The 8th tarot card is Strength, which depicts a woman empowering a lion. My zodiac sign happens to be a lion! I love felines. Coincidence? I think not. I believe myself to be a strong woman - mentally, I mean. If you've met me, you know that I'm the smallest person you have met! So I think this was a great idea. It's mostly inspired by the art of Luis Royo, but we brought in some elements of other dark depictions of the card. 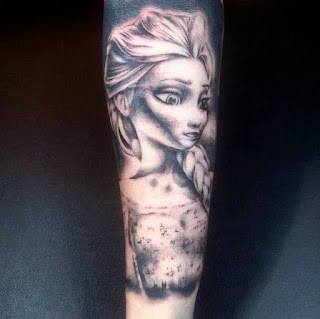 In the summer of 2014, right before I turned 20, I had randomly gotten a job at Walt Disney World, so I moved across the world to a continent I had never set foot on before. That's what teenagers do, right? Ok maybe not. Anyway, the movie Frozen was HUGE at the time, and my coworkers hated it, but I loved it. I could relate so much to Elsa. This lonely depressed girl that pushed away people who loved her cause she felt she was a burden to them. What a nice role model to have! So in love of her, a memory of working at Disney and to cover self harm scars (you can still see them if you look closely), I got this. I searched 6 pages on google to find this Orlando artist, which is amazing! It took two sessions, the first one in december, and the second in january of 2015. I love it so much. Now I can look in awe of the beauty on my arm instead of seeing ugly scars that won't go away. 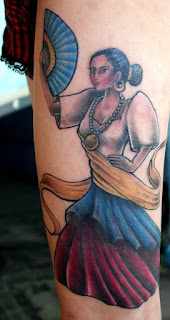 Which brings me to my newest one, done in summer of 2016. This idea I've had since I was 14 or 15. There is a place called Waterfront in Cebu in the Philippines (where my mother is from) which has these wall paintings of beautiful women in filipino national costumes. I combined them into this tattoo to represent my pinoy pride! The artist did a great job in doing that, as I probably had about seven different paintings I liked. I think it turned out pretty good, and it gives that authentic filipino feel - it's obviously done by a filipino artist. It took about 5 or 6 hours and was painful - and the aftercare was horrible, as Cebu city is so polluted and dirty, and the shower water at the hotel had chlorine in it - so I wore plastic on top the first few days when I knew I would be out around traffic, and washed it with bottled water. Did you by the way know that thick creams in the Philippines are sold in the tiniest packaging? My tattoo and eczema skin were not happy about that. 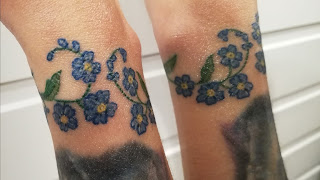 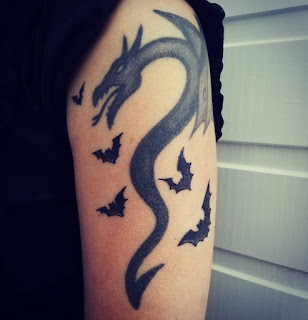 I got these two done by my friend Marthe in September 2019. She also did my partner's first tattoo. Forget-me-nots are my favorite flower, and I really love bats. Not any super deep reasons for these. I wanted to fill out the spot around my Nemi dragon a bit, but without ruining how iconic it is. Really satisfied with the result! We're definitely going back to her, she's getting better and better every day!

Like with piercings, you are probably wondering if these hurt. Yes and no. The thing is, tattoos are like childbirth (not that I have kids yet). Some hurt and some don't, they're expensive, but they're worth the process and pain - you forget the pain and you'll have it for life. Don't cheap out. If you're like me and your tattoos mean something to you, it's worth it. To be more specific, I thought the ribs and thigh were the worst - so both the ones I got in the Philippines, hahah. My arms didn't hurt, the worst one there was my Elsa on my lower arm, which really wasn't bad.
As for plans, my next will be my other thigh: the painting Åsgårdsreien with Frøya as the valkyrie in her cat wagon in the front. This will represent my norwegian side, and my last name is Åsgård - plus I'm a Wiccan / Pagan. I don't know when that will be, as the artist I want has a long waiting time and I have no idea when I will have the money. You can probably tell that I'm pretty picky about artists. I spent years planning my tattoos, and I have quite a few ideas that are many years old that will get done in the course of my life. There's no rush, I have my whole life ahead of me! Plus I don't wanna fill up my tiny body too fast, so I think around one tattoo (and one piercing) a year on average is plenty enough.

Those are my body mods and thoughts! Hope you enjoyed this, and let me know what you think! Feel free to tell me some of your views and such as well.
Posted by Caroline Åsgård Skulstad at 3:52 PM