If you have seen The Gothic Graveyard Show, you will know that we always have some sort of technical difficulty in every episode. Well, yesterday's live stream was the mother of them. We started a little later than usual cause Alanna's tablet kept dying. Then we had echo issues, and we thought it was me, so I put on headphones. When I select ''headphones'' as my audio device, all Skype sounds disappear. I spend like most of the episode with a confused face trying to figure it out. I ended up restarting my computer - AND THEN it didn't want to connect to the internet! I managed to log on with my boyfriend's laptop before we wrapped up the show. So that went to shit! People thought it was hilarious though. If you want to watch, here it is! 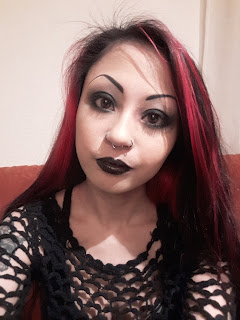 In more exciting news: Nick Cave & The Bad Seeds AND Ministry are coming to Norway! :D :D :D
Nick Cave is playing in Oslo in october, so we're gonna have to see if I go - I'm just not a huge fangirl anymore, so I don't travel within Norway to see bands anymore. Hopefully me and some friends can!
Ministry was just announced today, and they're playing in my city! That's amazing! The venue they're playing at is Ole Bull Scene, which is really cozy and intimate, as well as the interior being SO fancy. I saw Dimmu Borgir there, it was so nice! Abbath from Immortal even showed up! There's no way I can miss this. The ticket price isn't that bad, but I'll wait with buying the tickets. The concert is taking place on june 20th, so pretty soon after WGT - Which probably means we won't have much money. Concert tickets are future investments! I have a ticket for a festival in august - that I bought last august. With the official and unofficial announcements for WGT nowadays, I really feel this is going to be a GREAT concert year! I'm gonna go listen to my kind of rare Ministry CD box set.
Have you seen any of the bands mentioned or have memorable concert experiences? Let me know!
Posted by Caroline Åsgård Skulstad at 10:31 PM