Hi! This has been a quieter week than usual on my blog, since I got sick last weekend. So I took it easy and slept most of it off. Created this masterpiece on Instagram: 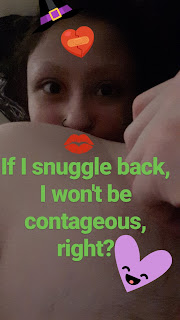 On tuesday I finally felt well enough again, and I was so happy to wear clothes again! Though this outfit is super boring, I actually got several compliments on it on Amino! The top used to be a HUGE t-shirt, and I finally modded it to fit me. I threw away the stockings since there were too many holes in them (yes, that's possible) and since I had previously cut the feet off (most likely because of holes), they are too short. 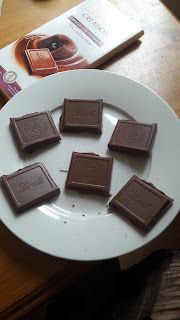 This chocolate is so beautiful, I just had to take a picture! It's gonna take me ages to finish them, since they really taste like a chocolate lava cake.
Last night my friend Hanna told me the piercing jewelry we had ordered together came in the mail, so after she put her babies to sleep we met up at Garage for a couple of beers. I had a nice time! After she left I met some other people as well. It's so funny when you're in a metal pub, cause you think you know every single guy in there, but nope, it's just another guy with long hair, a beard, leather jacket and boots. I find it hilarious that subcultures are supposed to be a break-away from the mainstream, but they usually end up having a ''uniform'' too, hahah. 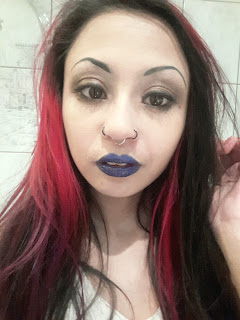 A photo of my make-up before I took it off 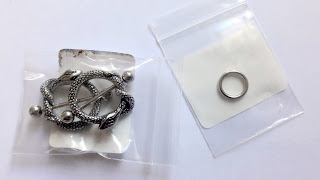 Jewelry from Crazy Factory! Didn't get much this time.

I'm also wearing my studded belt, but my pants are still too big, hahah. Started the day with coke and pizza in bed, felt so nice. Today we've done a spring cleaning of our apartment! Felt nice, and it was really due. Now I'm gonna go sort the recent laundry and stuff it back into the closet, then figure out what we're gonna have for dinner. Btw, I'm expecting a H&M haul tomorrow, so come back and check it out then!
Posted by Caroline Åsgård Skulstad at 6:10 PM