Try Not To Sing Along Challenge - Goth Edition! 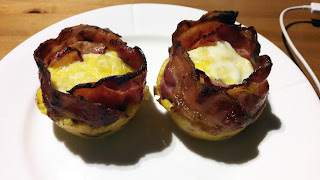 Yesterday's breakfast - Isn't it cool?! It's bread, cheese and eggs with bacon wrapped around it, cooked in the oven in a muffin pan. Anyway, I wanted to thank all of you who've read my blog the past few days - Especially Cemetery Confessions for sharing my blog post about them! Speaking of, they have a new episode out today! Seems like a good one. Gonna give it a listen after we finish this Nick Cave album. I spent the first part of the day yesterday in my Dracula kigurumi, thought I'd share 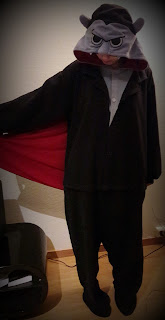 I put some clothes on, yay me! Yesterday evening my boyfriend's best friend Isak came over (check out his band here, you'll love it). I thought it was the perfect time to try out the ''try not to sing along challenge'' - (trad) goth edition! I had just found it on Gothic Amino, made by DeSantis. Here's a link to the playlist on Spotify. It was really hard! If you know me, you know I love to sing. So this was painful! But we managed to do it! By the time we were finishing up, Morgana Spikes had made a Siouxsie edition! That one was a little easier, but still hard. Here's the playlist for that.

In other news, a metal festival here in my city called Blastfest just got cancelled. There's been a lot of controversy around it, and I have myself volunteered at the festival and experienced the lack of, well, running it. They have a lot of debt, and finally today they announced they were bankrupt and cancelled the festival - only weeks before. People are pissed, cause many were coming from around the world! It's really unfair to them (it sounds like bands are gonna try to play at other venues though). They should have given up the fight long ago. I knew this would happen, I've seen it coming a long way. Now I had no plan of going (this year's line-up sucked), but my boyfriend was supposed to work through the security company he works for - so now that's not happening. Everybody loses!