Hello everyone! I am overwhelmed by the thousands of people who read my WGT guide - thank you so much! Glad to hear that it actually helped a lot of people out. The past few days I've been sick (again), but this afternoon I said ''no more''! This haul has been on our living room table for days now, it's finally time for me to try it all out. But let me first show you what I've been wearing: 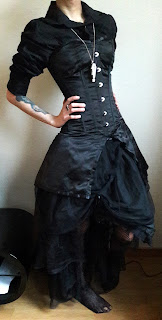 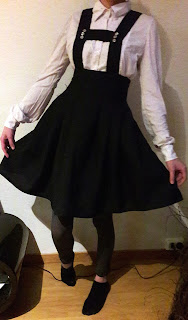 Now for the haul! I've been walking past H&M lately and noticed they were actually selling clothes that looked like something I would wear. Then I heard H&M had a Siouxsie & The Banshees shirt! So I took a peek at their website, and noticed TONS of gothy stuff. Mostly things that would go well with that nu goth trend, which I personally don't like, cause I'm just not that modern (it's mostly 90's inspired, so that and grunge and stuff is just not my thing). I ended up finding 5 items I liked! So I finally got them at the start of the week (shipping wasn't as fast as expected). Sorry that some of the pictures are blurry, but my boyfriend kind of sucks at taking photos. But I might take more pictures when I actually wear them soon. 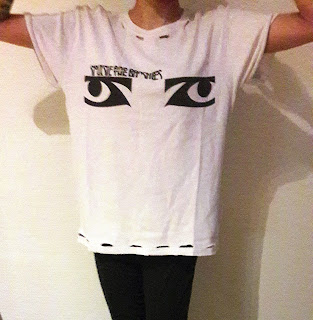 The Siouxsie & The Banshees shirt, already with holes 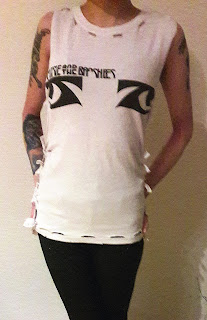 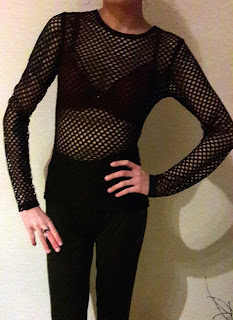 This fishnet top
Not stretchy, but good size and seems sturdy 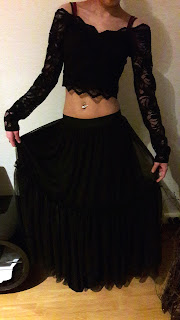 This lovely lace top and tulle skirt
I got the skirt in 34 since they were out of 32, but it fits nicely!
My boyfriend really loved these, and so do I! Very me. 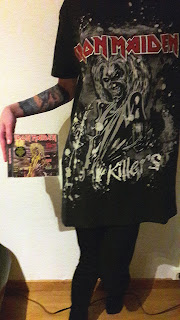 This Iron Maiden Killers shirt from the men's section.
Had to hold the CD cause I'm that lame.
I love their early albums!
I've kind of wanted to tattoo this design.
Either that or The Number Of The Beast.

That was it! What do you think? I really recommend H&M, they are very cheap, have pretty sturdy clothes and are great for basics (and childish socks). Now that they actually have cooler stuff, I've been buying more! The past few years they've had tons of awesome stuff around halloween times. If you are into this grunge and nu goth trends, you'd probably love most of what they're selling. It's kind of stupid / weird that they're selling band shirts, cause people will probably mindlessly buy them probably without even knowing it's a band (*cough* Joy Division's Unknown Pleasures *cough*). But I guess it can be a good way for us who actually likes these bands to get them easily! I usually only buy band shirts at gigs. That probably means I'll never be able to get a Siouxsie shirt, hahah. Though I've seen Iron Maiden twice, plus they were my favorite band when I was 14, so this is probably the 4th Maiden shirt I own. CAN you have too many band shirts?
Posted by Caroline Åsgård Skulstad at 7:53 PM