From T-Shirt To Crop Top & Skirt

I wanted to share with you a sewing DIY I did! I'm such a sewing noob, and I had no idea what I was doing, but I actually managed! So if I can do it, you can do it too! I had this old work shirt that was a unisex M, and I was swimming in it. Now that I don't work there anymore, I decided to turn it into something nicer! So I cut the collar, sleeves and the print out, so it turned into a crop top. Later I cut out bits below the armpits and sewed it together. It's still a little big like in the photo below. 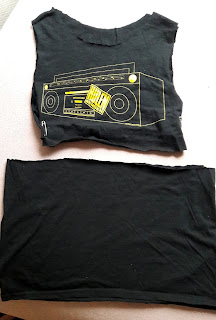 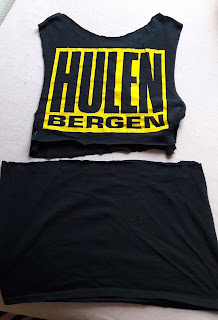 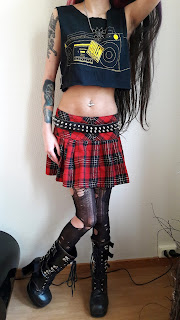 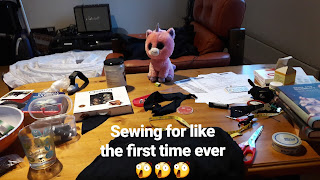 I realized that the excess fabric from the shirt was enough for a mini skirt for me! I put it on, safety pinned the excess fabric, measured it and divided it to each side when layed flat on the table. A mistake I did first was to cut a triangle from those to the sides a little further down, and it ended up looking like t-shirt sleeves sticking out. So I ripped out the stitches, and cut diagonally from the top again and almost all the way down (right before the hem). I turned it inside out and sewed the sides together again (I don't know what it's called, but I call it a ''loop stitch''). This time it looked great!
I did nothing to the top of it, so it doesn't look perfect there, but it probably will never show.
Here is the finished skirt! I wanted it to flare out at the bottom. It's so blue though, hahah.

I hope I explained that well enough for you! I like to think that most garments have potential. Keep this in mind when you feel something doesn't fit well, you want to throw it away or when you find something in a thrift store. What could you do to make it better? Get creative!

I'm just gonna throw in a couple of outfits from the past days. Today I'm wearing that above.