Gothic Amino is having this challenge nowadays, and it's perfect for me! I don't really like blogging challenges, but this one is right up my alley. Thought I could post it here as well! These are not really in order, I can never pick ultimate favorites. Sorry for the bad photos, I took these at night. Click each title to buy the books (may not be the same editions as I have)! 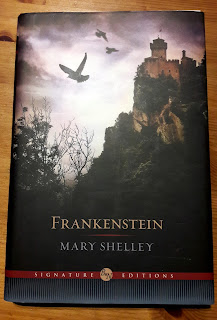 Frankenstein by Mary Shelley
People who know me, know I am obsessed with Frankenstein and Bride of Frankenstein. I have a make-up bag, purse and wallet adorned with them, and even the stripes in my hair are inspired by the bride. The movies don't do the book any justice though. It's such a good story! Mary Shelley wrote it when she was only 19, and it was published when she was 21. She had already experienced so much at that young age, which definitely affected the novel. I feel really bad for the creature, he learned so quickly, so he is intelligent, but he is in despair because he looks so hideous, everyone is afraid of him and there is no one else in the world like him. I'd say my favorite screen adaption of him would be the Penny Dreadful one. I don't quite get why they made him look like that classic image we all know. So if you like any of the screen adaptions, I definitely recommend reading this! I actually just finished re-reading this, together with the book club chat (Dark Pages) in Gothic Amino. 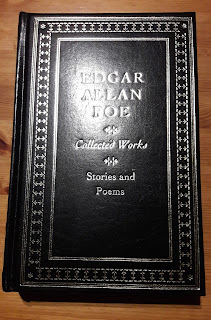 Edgar Allan Poe
Now Edgar Allan Poe only wrote one novel I believe (The Narrative of Arthur Gordon Pym of Nantucket), he is mostly known for his poems and short stories. Since I have this edition of collected works, and he's one of the first you think about when gothic literature is mentioned, I'll include him. I recommend the novel I mentioned, the stories ''The Tell-Tale Heart'', ''The Pit and the Pendulum'', ''Murders in the Rue Morgue'', ''The Masque of the Red Death'', ''The Fall of the House of Usher'', ''The Cask of Amontillado'', ''The Black Cat'', ''Ligeia'', and the poems ''Annabel Lee'', ''Lenore'' and ''The Raven''. Read everything he ever wrote if you can! Everything old is available online. 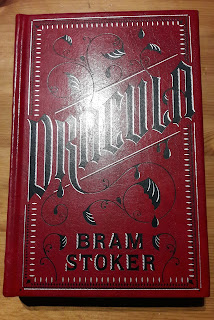 Dracula by Bram Stoker
Ahh, one of the classics - and a very big gothic cliché. I love it! It's famous for a reason. I even love most of the movie adaptions! I've heard a lot of people say that it was too heavy, boring and dry when they read it (same with Frankenstein), but I think that's probably because of the language. I am very used to literature from this age, in fact it's my favorite, so it doesn't bother me at all. Frankenstein is technically made up of letters, but it's not that obvious, but this one definitely is. It consists of diary entries, letters and newspaper clippings from the different characters in the book. I don't really have much more to say than: If you haven't read it, READ IT! 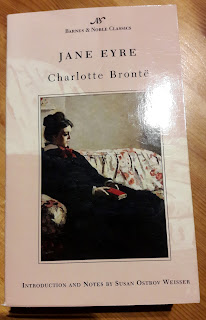 Jane Eyre by Charlotte Brontë
For some reason not many think of this when talking about gothic novels. This definitely is! A story of a woman's life full of tragedy. I really love the novels written by women and that have female protagonists. The female authors of this age really challenged people, writing about feminism, class, sexuality and religion (see Mary Shelley's other works). This is definitely an example of that. Add a gloomy scenery, a slightly scary master of the house and a mysterious supernatural element, and you have yourself a wonderful gothic novel. I want to read this again soon, but it's only been a few months since last, so I'll wait a little so I can at least TRY to ''shock'' myself a little. Also check out her sister Emily Brontë's Wuthering Heights. 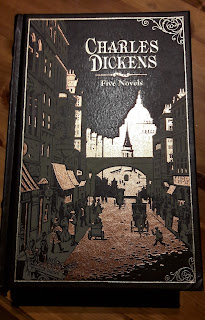 Charles Dickens
Also from the Victorian era, but not super gothic, are Charles Dickens' novels. He was definitely heavily influenced by gothic fiction, but he put them in a more modern urban setting (for the time). You'll see this in works like Oliver Twist and Great Expectations. In these you will also see his love for writing about the big difference between the upper and lower classes of society. I'm not quite sure, but he might have been one of the first to really point this out in writing. He was at least very brave for doing so! The edition pictured above contains Oliver Twist, A Christmas Carol, David Copperfield, Great Expectations and A Tale of Two Cities. 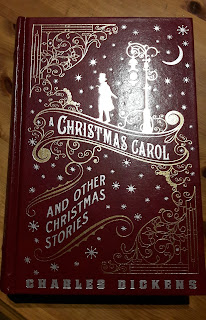 A Christmas Carol And Other Christmas Stories
I'm going to continue with even more Charles Dickens! I bet you didn't know he wrote other christmas stories than A Christmas Carol, did you? The edition pictures actually contains 22 stories! Honestly as I went through this, I liked the stories less and less (ending with three he wrote with Wilkie Collins). But the christmas books themselves were excellent! So I wouldn't really recommend this unless you're a big fan of Charles Dickens like I am. Great for reading during the holidays! 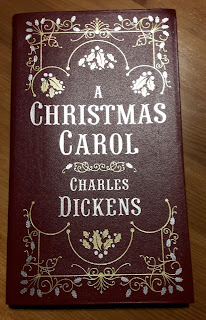 A Christmas Carol
Oh I'm not done yet. I found this little stocking stuffer pocket sized book as well! A mini leatherbound A Christmas Carol, it's so cute! I just had to have it. I'm sure everyone knows the story, and come on, it has ghosts! Isn't that cool and delightfully gothic, especially in such a ''super happy'' time as christmas? I recommend that everyone should own this, at least. 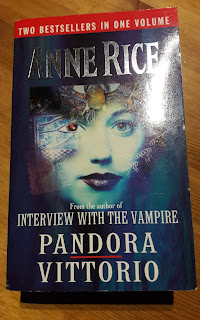 New Tales of the Vampires / The Vampire Chronicles by Anne Rice
Now, on to some modern stuff! I have to admit that I don't read much books where the author is still alive, hahahah. This pocket book was actually my mother's, who I can blame for getting me into horror and reading. I read this first, a couple of years ago, I believe, and then I read the Chronicles for the very first time this year (I know, revoke my goth card, but I read classics that most people haven't read, so there.). I already really liked these two books, without even having read the main series! I loved Pandora, she's such a strong character - and of course I'm a sucker for history and the supernatural. I'm re-reading this right now, and discovered that Anne Rice had made a stupid historical mistake: Saying that a vomitorium is where they vomited. Nope, it's the big arch entrance / exit of the arena. That kind of made me doubt the rest of her historical ''facts''.
Anyway, Vittorio wasn't as good as Pandora, but I liked that too, it was written very well.

Ok, now to try and sum up the Chronicles. I've only read the first 10, I gave up after that one, cause I was REALLY disappointed in that one after loving book 9. 11 came out after this ''I'm a christian now, I can never write about vampires ever again!'' and then ''Oh wait, I ran out of money, ok I'm back'' thing she had, so I'm not sure how those have turned out. Let me know if you have read them.
Interview with the Vampire: The movie has been stuck in my mind since I was a kid, and it was nice to finally read the book. It wasn't perfect, but I liked it, and it gave some background, but sometimes it didn't. I liked The Vampire Lestat better, cause Louis was pretty whiny and dramatic in the first book. It was nice to get to know Lestat! Funny that he was a rock star, and I liked the mythology.
I have a blog post with a full review of Queen of the Damned book and movie, click here to read that.
The Tale of the Body Thief was a little different, but I liked it. It has a good pace and fitting amount of action all the way throughout.
Memnoch The Devil: I didn't like this one that much. Too much christianity and biblical stuff for my taste, Lestat is very whiny and there's just too much ''unbelievable'' stuff happening.
The Vampire Armand: His story is very sad and moving. There's a little too much sex for my taste in this, and when it reaches the re-telling of the events in the last book it drags on quite a bit.
Merrick: This book was a little boring to me, and David just seems creepy (that might just be the spell though). The end was interesting though, with the ritual with Claudia and whiny Louis.
Blood and Gold: I was kind of puzzled about why Thorne was even in this book. It's Marius' story, which I really liked, cause he has lived through so many ages, which made it really interesting.
Blackwood Farm: I'm so glad this book was long, I really loved it! I almost didn't put it down at all while reading it, I just loved Quinn's story so much, it was really interesting and exciting!
Blood Canticle: Oh fuck this shit. I felt there was no plot, and the introduction of this weird species was just too much. I didn't mind the other supernatural things in previous books, but this one was just too much. I didn't like the white Mayfairs either. Lestat is now talking in a very casual and modern manner, and I didn't like that at all. I liked the antique air he had previously!
And there you have it, my opinions on all the Anne Rice books I've read. Hope I didn't bore you! 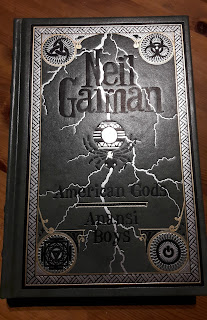 American Gods & Anansi Boys by Neil Gaiman
I've said for years that Neil Gaiman is the only one of my favorite authors that are still alive - says a little about me, haha. He is obviously influenced by books I like, so that's why I really like his books.
In American Gods and Anansi Boys he has a really refreshing writing style, that made everything in it really interesting and impossible to put down. As a norwegian and a Wiccan, I really loved the mythology as well! In Anansi Boys even more terrible things happen to the main character than in American Gods, and it has a lot of action. I wasn't aware that Anansi meant ''spider'' (I'm terrified of spiders, but it was fine, actually), and that the two books were slightly connected, so that was cool! I'd recommend these two for young adults and up who can take it, cause I do find that isn't really appropriate for children.
Speaking of, Neil Gaiman is of course the author of the book behind the famous movie Coraline! I remember having that read to us in elementary school, only because of the name - My name is Caroline, and my mother's name is Cora(zon). I didn't remember the story, so I read it again years later after seeing the movie several times (my cousin's daughter was obsessed with it). I liked it, but since it is a children's book, it wasn't THAT exciting. But to a child it probably is!
I'd also like to mention the comic that is a classic in the goth scene; The Sandman. My boyfriend has all of them digitally, so I read them all last year and I loved them. For Yule his brother and his girlfriend gave me a physical copy of the first volume! Hopefully we'll own them all one day.
I really need to read more of Neil Gaiman's work, like ''The Graveyard Book'', ''The Ocean at the End of the Lane'', ''Neverwhere'', ''Norse Mythology'' and many more.
I highly recommend his work, especially if you are into darker stuff, but can't really get into the writing style of old books. I'll leave you with this make-up video I did of Death from The Sandman!