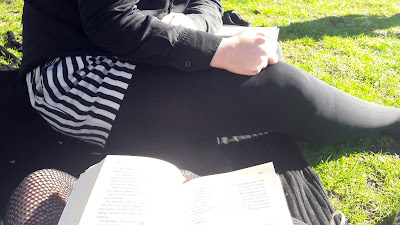 On sunday me and Emma had a nice reading date in the sun! We have lent each other a Neil Gaiman book so we could expand a little, haha. So she's reading my leatherbound American Gods + Anansi Boys, and I'm reading her Neverwhere. I like it so far, it's so weird! 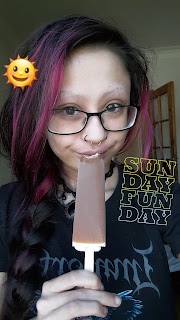 Before I went to meet her. It's been such nice weather lately, up to 20 Celsius! Except for the past two days, it's been raining again. I like the sun and heat! I could be without the wind, though. But I actually got a slight tan while we were sitting there for a couple of hours! 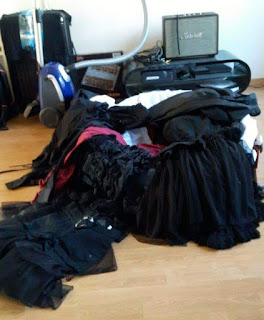 I made progress on the WGT packing! I've limited myself to 7 outfits for thursday to monday. I don't NEED two outfits EVERY day - But I definitely could, hahah. Now I just need to pick out all accessories, corsets, shoes and such. I have plenty of time, so no worries. 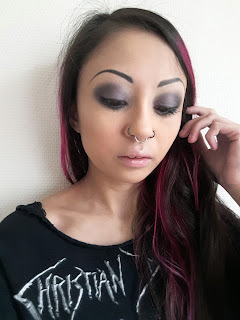 Some make-up as well

I'm so tired right now, I haven't slept all night for some reason. The past nights I've been watching a lot of vintage horror movies! Mostly starring Vincent Price, but also Christopher Lee, Boris Karloff, Peter Cushing, and many more. I don't like modern films much, but when they're a little old, I love them! Often they're pretty silly as well, and I like that. It's not like they're scary anyway, haha.

We just got back from viewing an apartment, and we really liked it! So it's a chance that we'll be moving in a couple of months. We have planned that our next place is the last place we'll rent, so it's been pretty important to get that feeling of ''YES, we could live here for years!''. This one has been the closest to that out of all that we've seen lately. We haven't actively looked, but we check the listings sometimes, and my mother-in-law thinks it's fun to help look! But nothing set in stone yet.

I gotta go put Simen in his corset, so I'll talk to you later! Bye.
Posted by Caroline Åsgård Skulstad at 6:58 PM