Hello hello! I am now home from celebrating our national day here in Norway. I've got lots to show and explain to you! I think we norwegians are really special when it comes to our national day.
But first, I'll tell you about yesterday, just to be annoying like that. 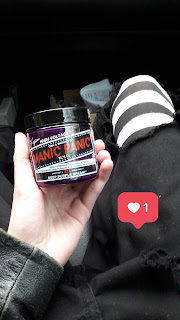 My new hair dye came in the mail! I haven't done my roots since the end of september, so it was finally time. I do them every time I finish a tub of color, but my pink lasted for a REALLY long time. I'm not sure how I like the color just yet, I think I need to do a second coat before I'm completely satisfied. Simen wanted new shoes, so we went to three different malls - and we found none. The closest we came to was a store where the sales lady was crazy (worse than filipino ones)! She gave him the wrong pair when he asked to try a pair in a bigger size, and instead said that ''they were nice too''. They looked okay, but the thing was they had a thick lining inside, so it would be to warm. She insisted they wouldn't be, and babbled a lot of nonsense (she barely spoke norwegian). So we literally ran out of there when she looked away. We were really spooked!
Other than that we bought some stuff and had pizza for lunch. So it wasn't a completely wasted trip!
Usually the 16th of may is a HUGE party day here, but I'm old and boring - and dyed my hair instead. 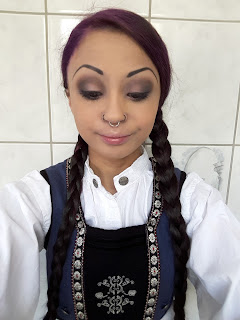 17th of may make-up using Too Faced Chocolate Bar

This is a children's version of our national costume.
I wore red stockings to complete the flag colors! 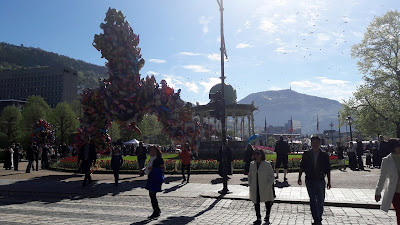 I walked into the city at 10 AM - The weather was really nice! Here's a picture from the city center.

I met up with Sandra and Simon, and found ourselves a spot to watch the parade. I think we watched for about 2 hours, and we didn't even see it all! Participating in the parade were military, universities, cultural organizations, athletic organizations, schools, brass and drum bands, scouts and russ. That probably didn't describe all, but it's hard to remember and translate it to english! And this is just the two main parades. There's also a parade in the morning and at night with torches. It's crazy! Just look: 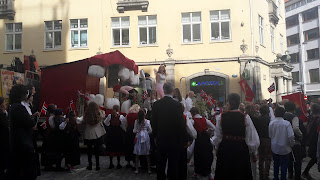 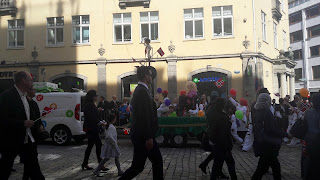 A science center for children 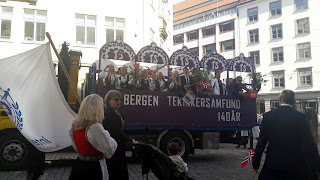 Some of my friends walking with their viking market! 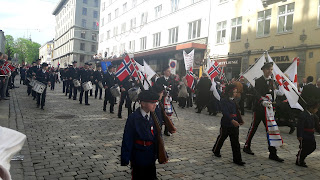 In my city, we have a lot of these drum bands for boys 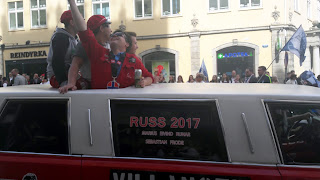 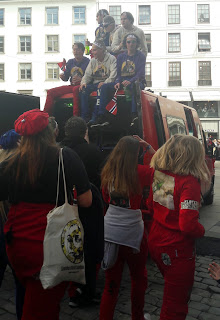 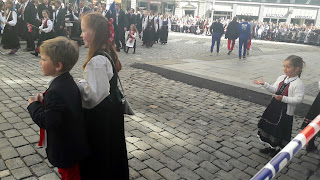 Standing there for so long really hurt our feet, and luckily we managed to get a table at Friday's. So we had some beers there. Emma and Simen also met up with us! Then we walked around looking at the silly sales booths and had hot dogs. We sat down at bar and had more drinks - and cake!
And suddenly this happened... 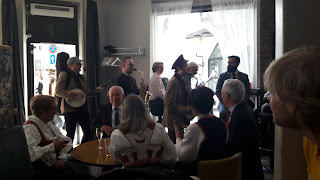 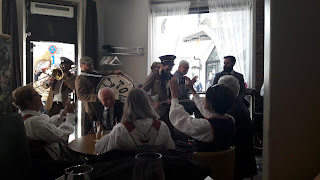 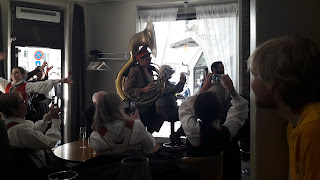 WHAT?! They played a couple of songs, and everyone had a good time. It was so random, but awesome! Afterwards we longed for the sun again and went to check out the little carnival. We just walked through it though, we didn't do anything, just looked at the people taking the scary rides and stuff. Then we had ice cream (I FOUND TWIX ICE CREAM - I haven't seen that since I was a russ 5 years ago, and even then it had been years since I had seen it last) and went home. After 7 hours of being out on my feet, I was pretty tired! So now I'm slouching on the couch without make-up.
Anyway, I'll get this out to you, and hope you enjoy! Have a nice day, especially norwegians! 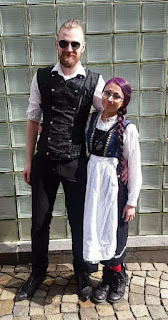 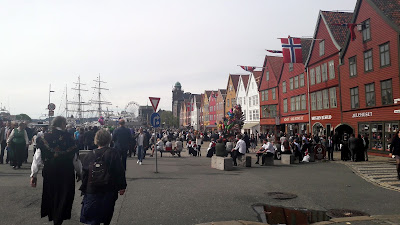