I'm just gonna say it right now, this post is not going to have much stuff. This was the day of the Obsession Bizarr fetish party, and since me and Simen had to be there at 6 PM to get ready, I usually take it pretty chill for the day before that. So all we did was go out to eat, and then I bought perfume. 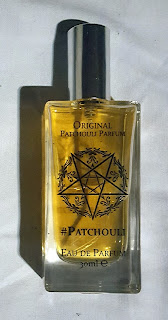 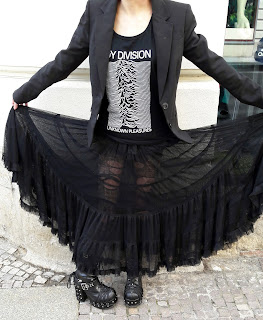 Simple outfit, no make-up and hair in a bun

I guess from here on I need to put a Not Safe For Work warning. I am by no means a body shy person, which pretty much is why I've been a walking act for 4 years now. It was so nice seeing the other dancers again! Most of us have done it repeatedly, and from now on we're thinking of staying with the people we have in the group now. This year we had a designer who made some really detailed ''pasties'' (except they didn't cover the nipple, haha), and we wore liquid latex - and of course the usual body glitter. I did winged out purple make-up to match my purple ''pasties'', and made a poofy double ponytail to get my hair out of my neck - cause it gets hot in there! 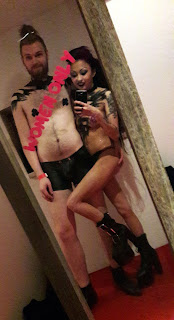 The smoking dance floor had really slow music at first, so it was kind of awkward to dance. But I heard it got better after a while! Most of the time I danced on stage between the fashion shows and performances. It was so fun! It gets very hot, but I just go backstage and grab a drink when the shows are on. It was great to dance with the others! Everyone is so unique, I love it. I think the funniest moment was when me and Simen were dancing in one of the cages, and Evanescence's ''Bring Me To Life'' came on - I HAD to go crazy. I lifted myself to the top of the cage and sang along dramatically. Cause how can you not do that to Evanescence? Preferably fake cry as well, haha. 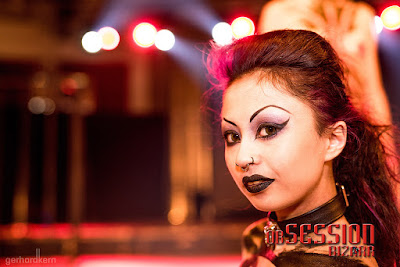 When we saw that people got less shy and started to dance on stage with us, I pretty much went ''our job here is done''! I'm so proud to have been able to dance all night in those shoes. So I think at about 3 AM I retired. We slowly removed stuff and put clothes on and said goodbye to everyone. I love everyone at Obsession Bizarr! So nice people. Me and Simen walked to the tram, hoping it was still going, but it wasn't going until an hour after, so we walked one more stop, and found a night bus that went into the city center. Lucky! Then we both took a nice warm shower, with the doors open so we could help each other see if we got all the liquid latex and glitter off, haha. We were actually the first ones home that night! But we deserved it. We had been ''working''!

To me who has done this before, I felt it could have been better. It was a decent amount of people. But one thing that kind of sucked was that they had forgot to turn on the monitors on stage! So my body recognized songs and I danced to them from memory, but I couldn't hear them. Simen did at least have the time of his life, and I heard Mats and Christine did too! So that's good.
Can't wait for next year!

Check back tomorrow for five fantastic bands we saw and more!
Posted by Caroline Åsgård Skulstad at 8:04 PM