The Haçienda by Peter Hook Review 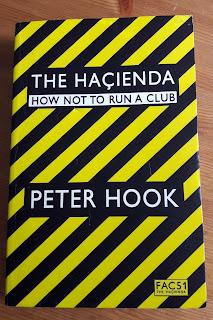 After absolutely loving the Joy Division book, I ordered this as well as the New Order book - which I have already started before writing this review.

Now I didn't really know about the Haçienda before this. But I'm really interested in Joy Division and New Order and their history, as well as Peter Hook's writing style, so why not.
I already knew that this was going to be the story of a trainwreck - but I had no idea how bad it was going to be. The prologue tosses you into a night at the club in 1991, and my god, it was crazy. I had to read out loud to my partner about three times just from those few pages, cause it was just unbelievable. And there was even more to come.

Each chapter is about a year in the life of the Haçienda. It was a club that was way ahead of its time. It had influences from New York, and everyone involved were so ambitious and had no idea what they were doing. It's funny to read, and you get a lot of insight, but you can't help but being in complete disbelief at all the things that happened.
At the end of each chapter there's a calendar with what was on at each night at the Haçienda, as well as miscellaneous quotes and facts, ''business talk'', and lots more.
In the middle you will find 16 glossy pages of color photographs from the time.

It was really cool to read about what the scene was like back then - especially since Hooky tells it in his way (like a friend sitting with you at a pub). But as I got further through it, it kind of dragged on a bit, I'm not really sure what exactly made me lose a little interest, but maybe it all just got TOO crazy, I don't know. But it ended nicely and on a good note, so I'm at least left sitting with a good feeling. He also recommends media where you can research more at the very end.

Unless you are a VERY big fan of Peter Hook, I wouldn't really say this is an essential read for Joy Division or New Order fans, as it doesn't have very much to do with the bands - He has written books about them now anyway. But if you are interested in the Manchester scene in the 80's and 90's, this is definitely for you!

Here are my favorite quotes from the book:
“Like the time I threw out Pete Murphy of Bauhaus for saying those six immortal words to Slim when he'd forgotten his backstage pass: 'Don't you know who I am?'
'Ha, ha, yeah, I do,' I said, 'You're out, arsehole'.”

“Now I don't know why, but Morrissey had always hated Joy Division. Maybe Rob got it right when after a lively debate as the cameras were turned off he turned to Morrissey and said, 'The trouble with you, Morrissey, is that you've never had the guts to kill yourself like Ian. You're fucking jealous.' You should have seen his face as he stormed off. I laughed me bollocks off.”

“The barrels were on a platform and to keep the platform level someone had shoved a quarter-inch tape box underneath it.
I pulled it out. Covered in old beer and sweat and condensation, it was one of the master tapes of Joy Division's debut album, Unknown Pleasures.
It made me smile. It was an absolutely perfect metaphor for the Haçienda.
Joy Division had held the whole fucking thing up.”

“Adidas produced a limited-edition pair of Haçienda trainers, designed by Yohji Yamamoto (Saville has worked with Yohji since the late 1980s, creating his catalogues and advertisements).
They retailed for £345 but people queued up from midnight just to be first through the doors to buy a pair. The shoes disappeared in twenty minutes - all soled out.”