I was watching ReeRee Phillips' video doing this tag, and I really liked it! It's very rare that I do tags, I think they're just really uncreative. But this one has some really interesting questions that I can actually give answers to! I hope you don't mind that basically all I blog about nowadays is music. I want to be more well-rounded, but I guess sometimes my life revolved more around one thing.

So let's just jump right into the questions!

1. Which bands/artist do you own the most albums by?
Definitely Darkthrone. I have all of their albums, even some duplicates, and some have a second disc, so that's a lot of CDs.
2. What was the last song you listened to?
''All My Colours'' by Echo & The Bunnymen.
3. What’s in your CD player right now?
Nothing.
4. What was the last show you attended?
Ministry here in my hometown. Read all about it here!
5. What was the greatest show you’ve been to?
I always want to say the last show I've been to, since it's fresh in memory. So I'm going to say The Mission, even though that's kind of cheating too, since that was a little over a month ago. But I was so happy that I cried for the last three songs, and I've never cried at a show before, so that's got to count for something. Read about that show and the rest of the third day of WGT here! 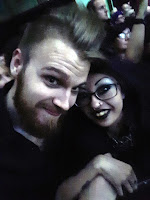 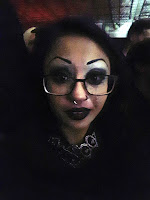 6. What was the worst show you’ve ever been to?
There's not really anything that comes to mind that was BAD.
When I saw Immortal once their pyrotechnics set off the fire alarm, and the concert ended early.
When I saw Mayhem it was tame compared to what I thought it would be, so that wasn't GREAT.
7. What is the most musically involved you have ever been?
Not sure what this question means, but I guess the last two bands I was in. I was the vocalist, using both clean and growl vocals, writing lyrics, and even started writing violin parts (from guitar, converted it to piano and then to violin).
8. What show are you looking forward to?
In about a month I will hopefully / most likely see Peter Hook & The Light, playing a Joy Division set! It's at this tiny festival I had never heard of, and they are the only band I'm going to see, haha.
Later in august I'm going to a festival in my city where Mayhem will play De Mysteriis Dom Sathanas in its entirety, and Enslaved will play Vikingr Veldi in its entirety. That will be interesting!
I'm also looking forward to seeing Satyricon later this year at a bar I used to work at.
9. What is your favorite band shirt? 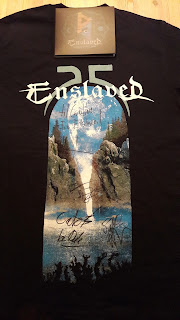 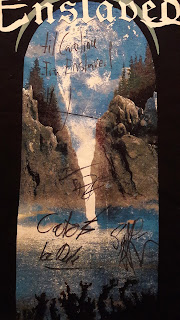 The vast majority of my band shirts are bought at shows, so they all represent a memory to me. But I think the most special one is this surprise I got for Yule from Simen. We were both at the show, but he managed to sneak away, buy the shirt, and give it to someone who got the band to sign it, then give it to someone else who kept it for him so I wouldn't see it before we went down to his parents for the holidays. When we arrived, I went to the bathroom, and he gave it to his mother so she could wrap it. Could you imagine my reaction?! Now I knew why he wanted to get that specific CD for me (I knew about that one). The funny thing is that when we were walking home from the show, I realized that I forgot to buy a shirt! So I've definitely found the right man.

Let me also mention that his favorite shirt is his Raised By Bats (Aurelio Voltaire) shirt, as that shirt was the reason I finally noticed him as more than just a colleague. He calls it his lucky shirt now!
Last WGT I saw and met Voltaire and told him about it. I made him record a video message for Simen too! That was probably the thing that inspired him to give me this shirt. Already early on in our relationship we're trying to out-do each other with presents. Well fuck, how do we top this?
10. What musician would you like to hang out with for a day?
I can name several! Wayne Hussey, Alice Cooper, Fenriz, Peter Hook, Al Jourgensen and Dave Vanian.

11. Who is one musician or group you wish would make a comeback?
Oh shit, that one is hard. There are SO many bands I listen to that don't exist anymore.
12. Who is one band/ artist you’ve never seen live but always wanted to?
Cradle of Filth.
13. Name four or more flawless albums
Audrey Horne - Selftitled
Cradle of Filth - Godspeed On The Devil's Thunder
Darkthrone - Goatlord
Dimmu Borgir - Abrahadabra
Iron Maiden - The Number Of The Beast
Mayhem - De Mysteriis Dom Sathanas 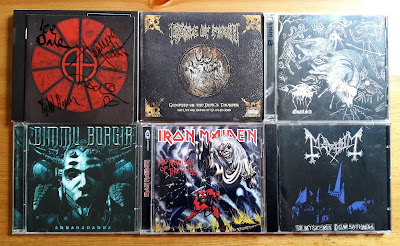 14. How many concerts have you been to, total?
Yeah no, I'm not even gonna try. That's even harder than how many times I've dyed my hair! I could MAYBE count big shows, but when you start counting in festivals and local shows, it just becomes impossible.
15. Who have you seen the most live?
I'm not gonna count local bands (bands I know and norwegian black metal), cause I can't even keep track of that. So when it comes to big shows, I've seen Iron Maiden and Avenged Sevenfold twice.
16. What is your favorite movie soundtrack?
Bram Stoker's Dracula (1992) by Francis Ford Coppola composed by Anton Coppola immediately comes to mind. There are probably other ones I like, but I can't remember any right now.
17. What was your last musical ‘phase’ before you wisened up?
Metalcore or whatever it's called. It's pretty silly.
18. What is your ‘guilty pleasure’ that you hate to admit liking?
I don't think I have any, I think the ''worst'' is some bands that I don't listen to anymore but used to, so when I listen to them it's more a trip down memory lane than actually enjoying the music.
I love stuff like Lily Allen and Shania Twain, and I'm not afraid to admit it!
Musically I'm all over the place. What I've found out is that the genre doesn't really matter, as long as there's a certain atmosphere / feeling it gives me. To me that's what music is all about! The soundtrack of your life.

If you haven't watched ReeRee's video yet, here it is!
Posted by Caroline Åsgård Skulstad at 4:12 PM