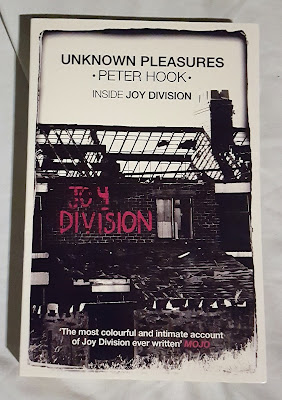 My third book about Joy Division. I found it at a booth selling cds during Wave Gotik Treffen, and I'm so glad I bought it. I immediately loved it. The difference is obviously that it's written by Peter Hook, the bassist of Joy Division. The two other books I have are not written by members of the band.

Peter Hook writes like he's your friend who is telling you about the ''good old days'' - but he makes you feel like you were there. He says he doesn't remember much, but there is so much detail to the story. He takes you through everything, from before the start to after the end.

Content summary:
The prologue is about their first gig as Joy Division.
Part 1 - Insight takes you back to Peter's childhood and up to 1976, when Sex Pistols changes his life.
Part 2 - Disorder starts with a famous Sex Pistols concert, and Joy Division (Warsaw) is formed.
Part 3 - Transmission tells many crazy stories the band went through.
Part 4 - Love Will Tear Us Apart tells more band stories, and Unknown Pleasures is released. It includes a track by track commentary of the album.
Part 5 - Ceremony is when things get really bad for Ian. Up to this point I had read quickly through it, but now I had to slow down, cause I knew what was to come.
The epilogue is after Ian's death.
The postscript is about what happened in recent years regarding Joy Division (dated 2013).
Then we have a track by track commentary of Closer.
After each part there is a timeline that summarized everything that happened in that part.
The back of the book has tons of black and white pictures. 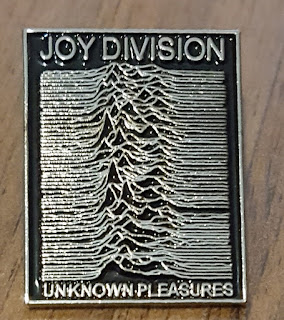 Like I said the book is very detailed, it includes pretty much everything that happened with the band. No one else could tell you this except the band themselves! Joy Division has this huge reputation and they're very glorified, but when you hear Peter Hook's version, you realize they were just kids, they had no clue, they just wanted to play gigs and have fun. It wasn't glamorous. You really get a good insight into how it was back in the day, and how lucky they got, becoming so big. This book makes them seem so human, and you definitely see another side to Ian Curtis.
I loved reading every single story and detail and Peter Hook's tone throughout the book - So I already have his two other books on the way!

If you're a fan of Joy Division, you NEED this book! Click here to buy it!

Read my review of the two other Joy Division books I own here. 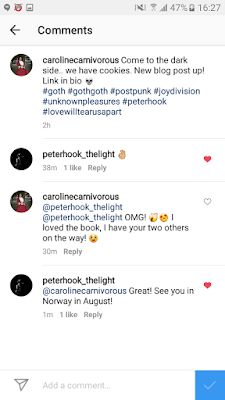 CAN I DIE OF HAPPINESS NOW?!
I'm trying my best to be able to attend that concert.
Posted by Caroline Åsgård Skulstad at 3:12 PM