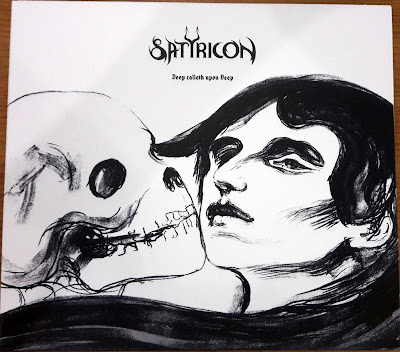 The rest of the casing and booklet is really boring though, so I'm only providing you with the cover.

Midnight Serpent
The album starts off with the typical Satyricon sound. Also the same type of ''short'' lyrics. Nothing new here, and not a good way to start the album in my opinion. The speaking part is a little different, so that's something, at least! I like the guitar in that part.

Blood Cracks Open The Ground
This one's a little better, a little different. It has a more progressive sound. I like the guitar melody in this. The lyrics could have been better (i.e. longer).

To Your Brethren In The Dark
This is a slower track. The emphasis on the (many) times he sings the title is kind of funny. I find these lyrics a little better than the previous two tracks. I get a proper black metal atmosphere from the guitars. Good drums too. The track drags a little on though.

Deep Calleth Upon Deep
Ok, the title track. Kind of tacky lyrics, but I guess it could be worse. Interesting operatic vocals. There's some string instruments in the background too, I would have liked them to be a little bit more forward in the mix - probably the operatic vocals too. That would probably have made the track more ''grand'', and fitting to bear the album title.

The Ghost Of Rome
The guitars are very.. high-pitched in this one. A little different. Not bad lyrics! This one also has operatic vocals, more prominent, which is very fitting to the song. Good ending.

Dissonant
Very interesting instruments in this one! Is it called brass instruments in english? A very funky song. Again, the lyrics could have been better, but they aren't the worst. Satyr just doesn't express himself in many words, haha. Some really good drums in this one. Overall, a pretty good song instrumentally! I think this is my favorite song on the album so far, since it's so unique.

Black Wings And Withering Gloom
Not bad lyrics on this one! This is the longest song on the album, so like the other long one, it drags on quite a bit. But towards the end we get some male operatic vocals and some strings, which saves it a little.

Burial Rite
Ok, last song! It's not really impressing me. I'm not sure if it could have been better if it was mixed differently. I don't really care for the lyrics. Kind of honestly glad that it's over.

Me and Sandra listened to this the first time together, and we were a little disappointed. It was kind of boring! We aren't exactly blood fans of Satyricon, but we did expect more. I liked the last album much better! We are hoping they won't play many songs from this album at the show here in Bergen on november 29th - but they probably will. Oh well, we get in for free anyway. I had a look at their merch though, they had a lot of nice stuff! So I will probably shop quite a bit at the show.

So this isn't a very long album, about 45 minutes, I think? It wasn't that expensive though, so I don't really feel bummed about buying it when I didn't enjoy it that much. If you are a fan of Satyricon, I think it's worth checking out - and I do believe in supporting artists. Just maybe not get that massive wooden box set that's super expensive.
Posted by Caroline Åsgård Skulstad at 10:24 PM