Lazily copied from my GoodReads:

Ahh, I haven't read a victorian book in a while, so this was really refreshing! I just love the language and how things were back then.

This is about four sisters, who each have their own ''flaws'' that they need to work on. Some are kind of annoying, some aren't that bad. This book follows them over the course of a year, starting with a christmas where their father is away at war, and they are complaining about being poor.

I won't go too much in on what happens, but to me, it seemed like this book had no plot at all. I felt it didn't have a story arc. It seemed mostly like a ''slice of life'' type of book. It's not THAT well written either. As a modern woman, I found some things in the book anti-feminist, but when I think about it, this book might have been considered pretty feminist at the time.

I think this book is best suited for young girls, especially if they struggle with the same things as the girls in the book. Personally the only enjoyment I got of it was only because it's a classic victorian book, which I love. So if you're into that too, it's worth a shot!

This edition also contains a little dictionary in the back, which can be quite useful for those who are getting into victorian literature! It's very fascinating to see how some words have changed definitions from then to now - and sometimes it makes me giggle while reading! 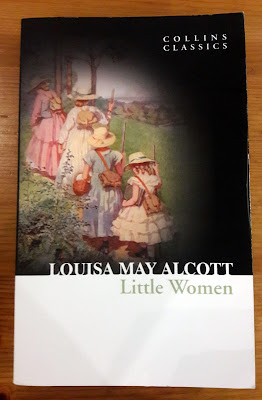 BONUS! I decided to watch the 1994 movie, cause it had some interesting actors; Winona Ryder, Kirsten Dunst, Trini Alvarado, Claire Danes, Susan Sarandon, and... Christian Bale. Simen said he couldn't imagine him as anyone else but Batman, and then I said; ''Well, let's see how he does as the boy next door!'' Then I remembered... His character's parents are dead, and he lives with his rich grandfather. This is the victorian Batman, haha!

The contents of this book only takes up the first hour of the movie - I assume the rest tells what happens in the later books. I definitely didn't expect the turn of events for all of the characters, so with that, the costumes and the scenery it was pretty okay. It's probably better suited for those who are into romance - I think it would be a nice holiday movie too.

I'm currently reading The Phantom Of The Opera, so I'll definitely review that (and probably the classic movie too) next time!
Posted by Caroline Åsgård Skulstad at 7:34 PM