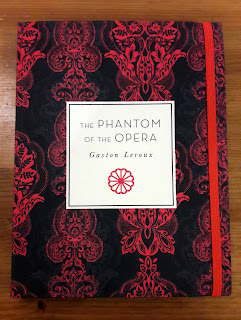 I finally got myself a copy of this classic! I've never read it nor seen a movie or musical, so here are my first thoughts!

It starts off with a bang, pretty much. We jump right into the horror and mystery of the opera ghost. The new managers of the opera don't believe in him, but they will of course experience that he's real.

I was surprised that most of the novel is about Raoul and his love for Christine. I would rather have liked it if we saw more of the phantom, but I guess it's "scarier" if we don't get to see him as much.

It is a very exciting novel, it keeps the same pace all the way, though I would have wished for the story arc to rise a little more towards the end - but it wasn't bad.

At the end I kind of feel sorry for the phantom, I'm not sure if one is supposed to, or it's just me that's obsessed with villains.

Also, the novel really makes me want to visit the opera house in Paris!

My copy is a nice clothbound type book with black and red brocade, and a stretchy band to keep it shut - Which was very useful when carrying it around in my bag! One downside is that in some chapters at the end of the book, there are footnotes missing. But other than that is a really nice edition, and they have other classics in the series I might get too!
Click here to buy a copy for yourself!


I decided to finally see the 1925 silent film as well - I think we all know the classic face of the phantom in that movie, but I have actually never seen it. It was easily found on youtube. I don't really like watching movies, cause I just can't sit and watch something for the duration of a movie (and movies nowadays just keep getting longer and longer!). I HAVE to do something at the same time - Usually I look up fun facts about the movie. With silent films, you obviously have to be glued to the screen more than you usually would. I still played games on my phone, haha. But I think I managed to catch every screen of text!

Anyway, it was a beautiful movie. The actors and sets looked amazing. For the time, it was really great! I do enjoy the fun music of silent films. The acting was super overdone, but I guess they had to do that. There were some variations from the book, but it wasn't too bad - The only thing I didn't quite like was that they made the phantom some criminally insane dude who had escaped from the island from criminally insane he was confined on. Oh, haven't we heard that one before (though maybe at the time this was a new thing?). That and he was killed by the classic angry mob. I kind of wanted to roll my eyes at that. But I guess it's me again wanting to sympathize with the villain.

If you're a fan of gothic and / or classic horror films, this is definitely a must-see! I can say the same thing for the novel - It was a pretty easy read. I want to see a version of the musical, so if anyone has any tips on a good one, let me know!

And since I am the metalhead that I am, I will leave you with the song that's been stuck in my head these few days I've been reading the book; Iron Maiden's Phantom of the Opera. A classic masterpiece, just like its namesake!
Posted by Caroline Åsgård Skulstad at 8:00 PM