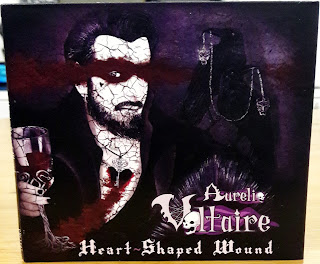 My partner Simen is a HUGE fan of Voltaire (probably even more now that the reason we got to know each other is him), so he has of course ordered the new album. It just arrived, so we are now going to review it together! I'm not a superfan, I call him the ''Weird Al of goth'', because to me he can often be too silly. So I'll be objective, and Simen might be biased. Here we go!

The Projectionist
The album opens up with the fun cabaret sound Voltaire often has. To Simen the energy and sound of the song reminds him of Voltaire's more recent work. I really like the bridge part. Simen is already singing along!

Human Nature
Really gothic guitar! It's twinkly, and as Simen pointed out, he's more of a chord strummer, so this is new for him! The lyrics are really beautiful, and you can tell in his voice that this is a really emotional and personal song. Simen says that this speaks to a lot of people.

Leaves In The Stream
Simen immediately says that this song is definitely not like Voltaire. I immediately recognized Alissa White-Gluz' (of The Agonist and Arch Enemy) voice. Her voice is amazing! Together they sound really good. This is definitely a more metal song, which I wouldn't have expected from Voltaire! But I really like it. Simen think the lyrics really describe the loss of control you feel when you fall in love with someone.

Butterfly
An acoustic guitar and piano song. A big contrast to the last song! Simen thinks he does a good job of pacing the album between more upbeat and slower, emotional songs. This is also a beautiful duet with Crystal Bright. We also get some emotional violin in it. 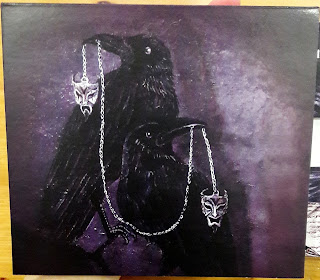 In Disguise
We immediately get the classic Voltaire sound with this song. The lyrics are about different carnival women Voltaire meets year after year, but it turns out; It's the same woman in different disguises! Very interesting.

The Ones Who've Hurt You
Simen saw a video of this from a show Voltaire did a few years ago, so it's not a very new song. We are now back to a slower, emotional song.

Hallelujah
This is kind of an eyeroll for me. I might be biased cause a norwegian group covered this once, and I got really sick of it. I don't really see the point of doing a cover unless you bring something unique to it. Voltaire doesn't really. Simen thinks that the most unique to it is his voice, but other than that it's still the same old song. At least there's some different instrumentals in this one that helps it a bit.

The Necropolis Of Former Lovers
This has a really cool, gothic intro! Very unique musically (especially for Voltaire). Lyrically, I still prefer Ex-Lover's Lover, haha! The lyrics in this one is the other way around from that one. But it's still a really good song!

The Folly Of Love
The guitar in this one reminds me of the To The Bottom Of The Sea album - I actually had to point that out to Simen! It also reminds me of Nick Cave! I yelled out ''LOL!'' when I saw that the first line of the third verse is ''So you sing some bars of Cohen's Hallelujah''. What if he had covered it like THIS song? Now THAT would have been cool! 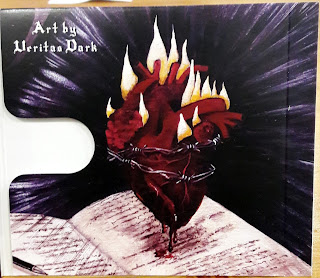 A Romantic Guy
A very cheerful song! It's very retro. The lyrics take a hilarious turn at the end. But the music is still very upbeat and cheerful! Simen says Voltaire does that quite a lot.

The Necropolis Of Former Lovers (Midnight In The Mausoleum Mix)
Ok, so I said the original was goth? Now THIS! This is very keyboard-oriented, and the bass is really.. well, gothic! Very beautiful and different. Often extra mixes on albums can be kind of misses, but this one is definitely a hit! So I definitely wouldn't mind this the next times we put this album on. Not a bad way to end the album, though I would still like more! I guess that says this album was a success for me.

So this album has a really good mix of new AND old Voltaire. Simen thinks he's really evolved with this album. He experiments a lot, and it works! The album is actually pretty long, about an hour long, but it really didn't feel that way! It's well paced, so you don't get bored at all. The album starts off positive in the beginning, then it all goes to hell. Just like love can be sometimes.

Overall, this is a really good album. I feel really different from when I first started writing this post! From Voltaire I'm used to a lot of silliness - Too much for me. Simen is a big fan of it. But this album definitely didn't have that! He still puts his personality into the songs, but blends it emotion, and together it works really well. We both agree that this makes us like him even more! This is definitely an album from his heart. If you want to hear / like this side of Voltaire, this album is definitely recommended! Two thumbs up from each of us, and a big thank you to Voltaire for bringing us together! I hope to see and meet him again one day, WITH Simen, so he can meet his idol! 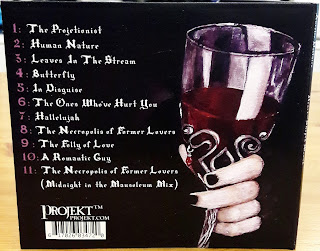 Typo in the title of the first song! :o
Posted by Caroline Åsgård Skulstad at 7:21 PM