I almost forgot about this! I've been sick (damn you, Simen) and lost in the world of Dark Shadows. Last night I saw Satyricon live (will blog about that soon), and today I shopped for Yule presents.
So time to answer the questions you have sent me!

Gloomy Deadly Vampires With Perfect Hair And Razor-Sharp Cheekbones. Did I mention they're vegan?


Spiral Python: What meanings are ascribed to your tattoos?

I actually did a post about this when my blog was pretty new, click here to read the full post.
In short; I have the Nemi dragon because I grew up reading Nemi, a grenade heart with flames inspired by the cover of a book about metal to symbolize my love for metal, the 8th tarot card strength because I consider myself strong (plus I'm born on 08.08 in leo), Elsa as a memory from when I worked in Disney World because I saw myself in her, and a woman in a filipino national costume to represent my filipino half. 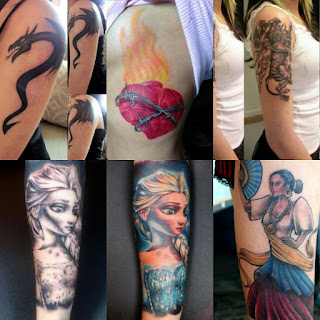 Chrisbeevegan: Which is your favorite tattoo? Do you have more tattoos planned? Is there a place on your body you would never want to get a tattoo?

My favorite would probably have to be Elsa. I still look at it in awe, it's so beautiful! It also reminds me of how strong I am, cause you can still see old scars through it.
I have tons of tattoos planned! I've had a folder on my computer since I was a teenager full of inspiration photos. My next tattoo will be of Åsgårdsreia, to represent my norwegian half - and since Åsgård is my last name. There are several others as well, but that'll probably take years.
I don't plan to tattoo my face, neck, more of my ribs, stomache, chest, insides of my legs, feet and hands. I want to stick to sleeves, a backpiece or two, and not that much on my legs. But since my body is so small, I might change my mind if I want something important tattooed. 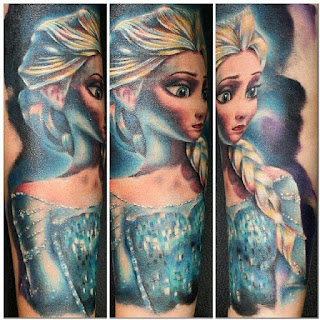 Little Lady: I was wondering what is your favourite piece of goth jewelry?

That would probably be my necklace from The Pumpkin Coven. It's the fanciest piece of jewelry I own! I also have a matching bracelet - and both of them fit me really well! That's pretty rare for me. I'm not much of a jewelry or accessories kind of person - often because of sizing. 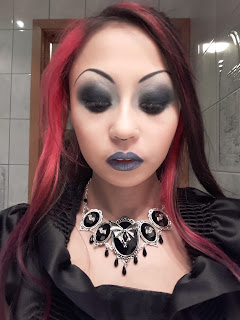 Transilvanian Hangover: I’m not sure if someone has done this before in the past, I couldn’t find anything on it, but I was wondering if I could trouble you to do a post or something explaining waves. Specifically, I’m confused as to what terms such as coldwave, darkwave, new wave, ect. mean and their relationship to terms such as post punk, goth rock, ect. also confuses me. They seem to mean very similar things and I can’t seem to find a clear explanation for it all - also I can never be sure if the person explaining is someone who actually knows what they’re talking about. I’ve talked to you before (idk if you remember) and I trust your judgment on the matter

I honestly don't care that much about music genres, especially when it comes to stuff like this. But I can try to give a brief explanation! Just let me know if you want me to go more in depth in a separate post.
Cold wave is the french version of post-punk (like deathrock is basically the american version of goth rock).
New wave is more electronic, very similar to synth pop.
Dark wave is a mix of new wave and post-punk / synth pop and goth rock.
Ethereal wave is.. well, ethereal, haha! I guess similar to dreampop and shoegaze?
Neoclassical wave is influenced by classical music and ethereal, but also considered a part of darkwave.
Synthwave is like new wave and dark wave - just with more synth (a little obvious).
Okay now the word wave sounds weird to me, so I'll stop now, haha. These are at least the most important ones that are connected to goth music. There might be more, but like I said, I don't really care. If I like something, I like it, I don't really care what it's called, how it originated, or the technical elements of it. Plus a lot of bands can be put into several genres.


The Anti-Social Cave: I got some questions for your Q&A!! What's your favourite hot drink? How many languages do you speak? Who do you look up to?

I'm really boring.. Cocoa - I don't drink coffee, except for frappe, haha. Not really a fan of tea either.
Uhh.. I started out with 3 (norwegian, filipino and english), and later learned the basics of 3 more (spanish, french and german), and if you count swedish and danish (I don't, really), 8!
I'm 146 cm tall, so everyone, LOL... I don't really have any specific idols or anything. It seems to me that when others look up to other people they basically worship them and want to be like them and they affect their lives in a certain way, and I don't really do that, at least now. When I was younger I could be very obsessed with musicians, but not anymore. They're just regular people (albeit with talent, and I respect them)! Now that I'm an adult and very comfortable with who I am, I just do my own thing, pretty much ignoring what everyone else does, haha.


So that's it! Thank you for sending in your questions! You can always ask me questions, send me suggestions for posts, etc. at any time! I appreciate it. I'm gonna go try get well again so I can blog more soon!
Posted by Caroline Åsgård Skulstad at 9:36 PM