A Column Of Fire by Ken Follett Review 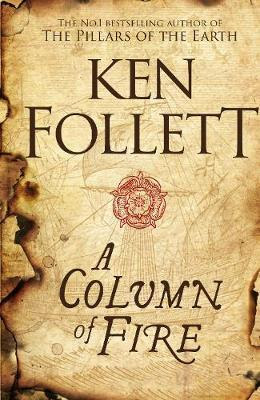 I read an advance reader copy of the norwegian version. I thought this brick would be really hard to get through, but I did it in less than a week. It was surprisingly easy to read - I don't know if this applies to the english version? If someone has read it in english, please let me know.

At the end of Bloody Mary's reign we meet Ned Willard, a young man coming home to Kingsbridge for christmas, and excited to see the girl he's in love with; Margery Fitzgerald. But sadly she is forced to marry Bart, viscount of Shiring. After a feud between the protestant and catholic families, Ned sets off to work for the upcoming queen Elizabeth, and becomes very successful and a prized asset to her when Europe turns against her.

In Paris, Mary queen of Scots marries Francis II. There we meet the spy Pierre Aumande, protestant Sylvie Palot and the Guise family. We are also taken to Spain and the Netherlands through Ned's brother Barney, a sailor. Follett is great at intertwining the lives of the many different characters, so it wasn't very confusing (plus there is a handy list of who's who in the book). Together with the characters we witness the St. Bartholomew's massacre, the execution of Mary queen of Scots, the defeat of the Spanish Armada, the capture of Guy Fawkes and other dramatic happenings in the 60 years this book spans. It's quite the amazing read, even though we all know what happened.

Follett's attention to details is remarkable, and you can really tell that he has done a lot of research. He apparently used 228 books for that purpose! You can also see him visit the locations here:

I personally really hate when things are historically inaccturate, so I love him for making sure that everything is correct. So if you're as fascinated about the history of monarchy as I am, you should definitely read this book! And I will definitely check out his other books, particularly the first two in this series.