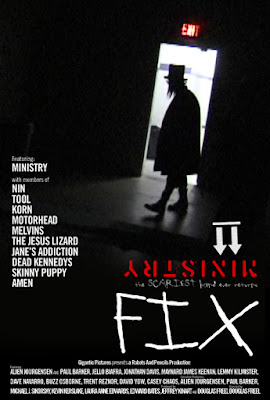 So in the middle of the night I found out about this movie, and found it on youtube, so I decided to watch it. I love Ministry, even their first album, and I'm so fascinated about how much Al Jourgensen changed from the 80's and upto now. He used to be so handsome! And now he's just.. old uncle Al.

The documentary is mainly about Al Jourgensen, and consists of a lot of backstage footage from one of their tours in the 90s, as well as interviews with ex band members, Lemmy, Trent Reznor, Nivek Ogre, and other musicians and people in the industry. I think it was really interesting to see - I had no idea this kind of footage existed. I guess it's probably because Al is ashamed of the long period of his life he was a drug addict. By the way, if you are sensitive to that kind of stuff, you shouldn't watch this. There is obviously a lot of drug use shown in this film. There's also even a clip of Al sticking his penis into a roast chicken! So definitely one of those crazy ''sex, drugs and rock n roll'' things. But if you're interested in seeing that, I recommend it! I love hearing stories like that. I need to read Al's autobiography, I'm sure there's a lot of good insights there.


My blog post about the Ministry show in my city around a year ago!

If you want to see the movie:
Posted by Caroline Åsgård Skulstad at 11:34 PM