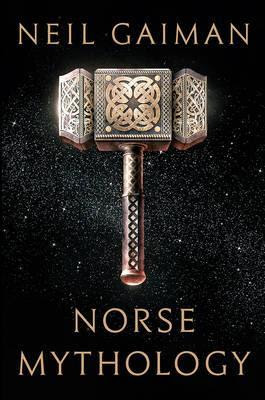 I read an advance reader copy in norwegian - which is pretty fitting, after all!
The last words in the book are ''Åsgård: Home of the æsirs. Kingdom of the gods.'' - and yes, that's my last name, which I find pretty badass.

When this came out I thought this would be similar to American Gods or something, but it wasn't. This is literally just stories from norse mythology written down - and since I read it in norwegian I can't really be sure of how much of Neil Gaiman's writing style shines through. But to me this is just the stories I have grown up with - kind of classic fairytales norwegians kids are told! And at school my last name was definitely pointed out a lot when we heard the tales, haha.

The book contains 15 stories from norse mythology; from before the world was created, to ragnarok. After Neil's introduction there is also a short introduction to Odin, Tor and Loke, and in the back of the book is a little word list of gods, goddesses, places, creatures, items, etc.
It's not a very long book, it's 312 pages, and since the stories are relatively bite-sized, it's pretty easy to get through. I actually think that this would fit well as bedtime stories!

If you are new to norse mythology, or very interested, I would recommend this. If not, it's probably not something you should run out and buy. And like I said, because of the translation I'm not sure if this is a must-have for Neil Gaiman fans - but if you liked American Gods, I'd give this a shot!