What Is Goth? by Aurelio Voltaire Review 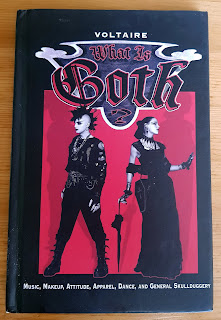 BABY DON'T HURT ME, DON'T HURT ME, NO MORE! This is not to be confused with my post (that I dare say is better informationwise). This is a book by Aurelio Voltaire, who is quite famous among goths. I got this on ebay for very little (lucky), and when it didn't arrive, I was refunded. But then it showed up (super lucky)! It's been in my to-read pile for ages, but recently I've gotten through a lot of books, so now it's finally time! I know a lot of you wanted me to review this!

The book seemed promising, but I was surprised that it was such a small book (a little taller than Simen's Kindle, and thinner than it) - less than 100 pages. It has black glossy pages, which annoyed me a little, because AHH FINGERPRINTS. Also hard to take photos of, so excuse the photos below.

The introduction is Voltaire's journey into goth and his career. Then we get into the question in the book's title. The first brief description is fine, and he shows photos and descriptions of different types of goths. I loved the description of a rivethead's musical tastes: ''Anything that features angry german men chanting in unison over a distorted drum machine while someone kicks an oil drum with a steel-toed army boot (this happens more often than you think!).'' But note: A rivethead isn't a goth.

Then he goes on to explain the history of the word ''gothic''. He made the same mistake as Anne Rice did, and thought a vomitorium was a place they used to vomit in ancient Rome.
What I also reacted to was that he says the first time the term was applied to music was Bauhaus and Joy Division. Which is wrong. The first time a music journalist used the term was about The Doors. And when it comes to what is now called the goth scene, I read that it came from Ian Astbury (Southern Death Cult), who called Andi Sex Gang a little gothic goblin, because he dressed in black, listened to dark music and lived in a place called Visigoth Towers - so his fans were then called goths.
But of course, there are several ways it has come to describe the goth scene today - and most likely all of them combined is the reason that's why it's known as goth today, despite regional differences. 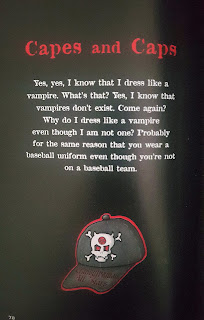 Then we have the gothic philosophy section, that says ''how deep is your goth?'' (I really mean to learn - cause we're living in a world of fools breaking us down, when they all should let us be...)
Anyway, this says that ''goths are often people who were victims of abuse'' - WHAT?! I don't even know what to say here. I definitely don't agree with this part. It just seems very generalizing and hateful towards non-goths, probably because of Voltaire's own experiences.

Over to some more fun stuff. A page titled DUDE LOOKS LIKE THE MATRIX! (lol) lists comments goths got between the 70s to the early 00s because of movies that came out in that time. I found that pretty funny, and a lot of people could probably relate to that.
There's a gothic name generator, which gave Simen the name Sir Byron the Liberator of Ravens.
Mine: Countess (YESS!) Lucidia the Keeper of Nobles. There are poem generators too!

My generated gothic poem:
Gloomy is the core of my left kidney.
Cautiously I walk through the terrifying forest
until mulatto clowns free me of my inner peace.
Demons, demons, demons.
Though art my destruction.

My generated horror poem:
Dead birds descend from the cliff-tops with
flailing eviscerated monkeys in their monstrous undergarments.
The sounds of breaking wind call to me from beyond the confines of decent poetry.
Decaying in the outhouse toilet...
The bridge of the beast is vanquished, vanquished, vanquished. 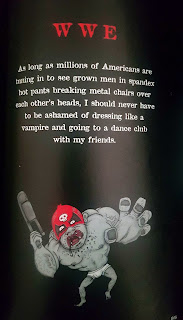 There are some hilarious dance tutorials (yes there are pictures) that show you: The gothic two-step, ''Who spilled a coke on the dance floor?'', cobwebs in the attic, the gothic tai chi dance, pulling the evil taffy, grab the bat, punch the hobbit! and the missing contact dance.

There's for some reason a random story about Voltaire's skull sweater that apparently is the reason he gets ''randomly searched'' every time at the airport. Ehh okay.
Other things in the book are bad goth looks, photos of Voltaire's friends, gossip, a.. goth look tutorial for a monkey? Why? Anatomy of different goths, hair and make-up tutorials and more.

There are some other things too, that I'm not even going to bother to comment on. Each ''part'' (I guess topic) of the book are really short and brief. But one thing I will comment on: His defense of Marilyn Manson. Of course he's mentioned in here, but I didn't expect him to defend him. He says he should be congratulated for bringing the goth look to the mainstream, and is a great spokesman. His argument is that because cybergoths are considered goth, why shouldn't Marilyn Manson?
If you want to listen to a GOOD defense of Manson, listen to Gothquisition 2. And here is Aytakk's follow-up article to it. 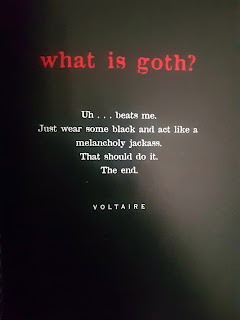 The book starts off with this page. Probably meant to be funny, but I didn't really think so. I have probably said before that Voltaire can get too silly for me - luckily most of this book isn't in a silly tone. BUT at the end of the book this quote is brought up again, and as it seems like he's going to answer it properly, he ends the book with this bomb: ''It's whatever you want it to be.''
NO NO NO. He can't fucking say that! This just ruined the entire book for me. Sure, there were some parts that dragged down, but this.. took the whole cake. You can't attempt to write a book about what goth is and then say it can be anything. Now this COULD be a joke, but it's DEFINITELY NOT FUNNY. There are tons of kids who look up to Voltaire, and they could definitely take this book seriously. I'm glad this thing is out of print! But I don't want people to spend lots of money on a used book when it's not worth it. I'm glad I got it for free! So I definitely don't recommend this book for teenagers, those new to goth or non-goths to learn about goths. It's just not accurate enough.
If you actually want to know what goth is, read my own blog post.

I guess the book is fine for goths who know their shit, and doesn't take it so seriously and can laugh at themselves. Cause I did enjoy the humorous parts. But since it's out of print, you most likely have to pay a lot of money to get it (his Paint It Black: A Guide To Gothic Homemaking is crazy expensive, probably because of his youtube series) - and since it's such a short and small book, I wouldn't.
I don't like being negative, I'd rather not say anything, but I felt I needed to with this, as a lot of people want this book and want to know how it is. I don't want people to waste their money, and definitely not take this book seriously. That's my honest opinion.
Posted by Caroline Åsgård Skulstad at 11:38 PM