Music To Die For by Mick Mercer Review 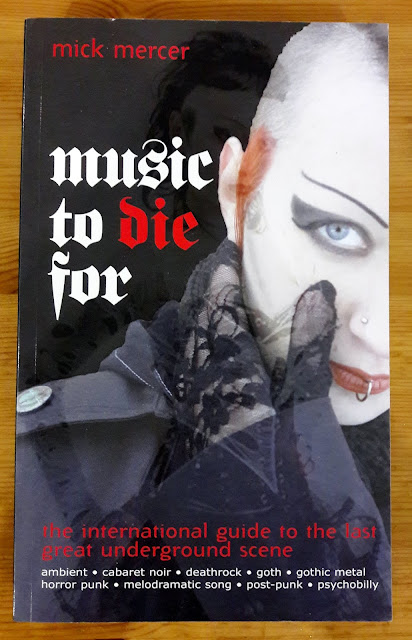 I had no idea that this book was just a massive encyclopedia of band names. So I've only looked at the band names, and not much more than that. They're organized alphabetically, and usually include genre, origin, year formed, members, a short description, discography, and link (usually to Myspace or website that don't even exist anymore). After every letter there are a few pages of black and white photos of random bands mentioned from the previous pages. In the back there are links to magazines, and lots of Cherry Red ads (yeah I think that's where I got the book while CD shopping).

I assumed this would be about goth and similar genres, but it includes lots of other stuff as well. Here's a short list of some bands I don't understand why are in it:
69 Eyes, Abney Park, Alice Cooper, Birthday Massacre, Dresden Dolls, Epica, Evanescence (and a tribute band), HIM (referred to as Goth-Lite LOL), Johnny Cash?!, Lacuna Coil, Leaves' Eyes, Nightwish + tribute bands (I had a feeling they would be in there), Rasputina, Sirenia, Theatre Of Tragedy, Tristania, Voltaire, Wednesday 13, Within Temptation, and probably more.
I do see that the cover states ''ambient, cabaret noir, deathrock, goth, gothic metal, horror punk, melodramatic song, post-punk and psychobilly'' - But I think that's a pretty odd mix.

I did find a bunch of norwegian bands in there, which I'm pretty surprised by. But most of them had broken up by now, so that was disappointing. This probably counts for other bands too.
But I have to say, it's hard to flip through this without stopping to put on a band!

In conclusion: I don't really recommend this. It's just a (600 page!) list of bands you can find anywhere online. (Like Alex Malkavian's ''Every Goth Band Ever'' Part 1 and Part 2 - or my own shorter list here) If you are a music nerd, you WILL do a lot of research anyway - And it's more fun to do it yourself! Plus a lot of the information is outdated, as it was published in 2006. I also don't get why there are links in there, it just doesn't make sense in a printed book. It's a shame, cause I had heard Mick Mercer wrote great books! If anyone has read his other books, please let me know how they are. I don't want to keep this one, so if anyone wants it, hit me up!
Posted by Caroline Åsgård Skulstad at 1:02 PM