I got an email today from a reader who requested me to go more in-depth about the whole goth vs gothic thing. I'm happy to help people out! If anyone else have any requests for stuff I can write about, go right ahead and send me an email at carolineoasgard@gmail.com.

So the main question is: Is goth JUST about music?
Not really no, but it is the main part. Without the music this subculture wouldn't have existed. People didn't call themselves goths 100 years ago or more, even though the gothic was really popular. The gothic has given inspiration to the goth subculture, so we can't completely dismiss it. But what I and a lot of others usually say to newcomers is that music is what it's about. I think it's much easier to say that right off the bat, so people don't get the wrong idea. There's so much to learn, so it would be quite overwhelming to throw in the entire history of a 40 year old subculture at once - in addition to the history of the gothic, which spans what, 1000 years?

Goth is usually connected to gothic and spooky interests, like the gothic, all things halloween, fascination with death culture and so on - but that doesn't apply to all goths. We often do enjoy the gothic arts, but not everyone. And I don't think it's common for historians and such who specialize in the gothic are goths - not from what I've seen, at least!
Then we have the fashion; the easiest way to tell if someone is a goth. Or? While most goths express their taste in music through their looks, not everyone does. I for sure don't bother to do my make-up and hair most of the time, and I wear a uniform at work. And some people just don't feel the need.

I understand why all of this can be confusing! You see people on the internet say this and that, and you don't know who to listen to. Well; don't listen to anyone, you just do you! One thing is facts, but another thing is letting stuff on the internet dictate your life. I didn't even know about goth, I found it after the music, gothic literature, fashion and so on. I was really happy to find out that there were others like me out there. And if you find out that maybe you're not a goth after all, what does it matter? It's just a label. Everyone is different. And just because you can't claim a certain label for yourself doesn't mean that you can't be friends with goths. 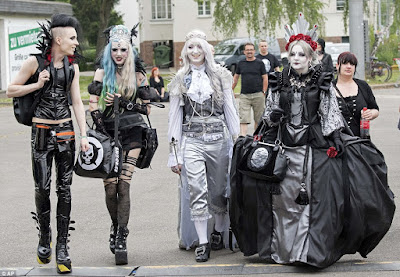 So.. where does that leave us? Well, one thing I'd like to think is that goth is a culture - which includes fashion, lifestyle, literature, architecture and art as well as music. Not everyone agrees with this of course, and that's fine. But that still doesn't mean that gothic is the same as goth.
Gothic things don't make up the goth subculture, but it can be added to make up the goth / gothic culture, as many goths like both (I do, for example). So those things aren't goth in themselves, but they are somewhat related. Whereas goth music is goth music - that's what makes a goth a goth. A punk likes punk, a metalhead likes metal, and so on - goth is exactly the same. Everyone is different, but what people in a subculture have in common is the music - but often they have other similar interests too.

And to get more clarifications out of the way: No, you don't have to ONLY listen to goth music to be a goth. I am a metalhead as well, but I can also listen to Shania Twain. It doesn't matter. Everyone has outside interests - cause we're human. And no, you're not expected to know everything about goth, it's history and everything about every single band. Very few people do. You don't have to look goth to be goth either. What else is there... These are just things I don't even consider, cause it's so ridiculous. But sadly people actually believe these things. I've heard that it's because of elitists, but I've never seen this kind of behavior, online or in person. I've only heard people online talk about it, but it didn't happen to them. So I kind of feel that type of elitist is a myth. The word elitist is misused anyway, cause even I get called elitist, just for saying what goth is and isn't. I don't think there's anything wrong with that, and I certainly don't think I'm any better than anyone else for doing so. I just think it's important for the subculture not to be watered down, especially with all the misinformation out there today. Oh! One more clarification! All things goths like aren't goth. What I mean by that is that a lot of people call other interests they might have goth just because they're goths. Which is wrong to do. The donuts I made yesterday aren't goth because I made them - or metal for that matter, lol. If everything was goth, goth wouldn't be so special anymore. It's a specific thing, it has a definition. And it means a lot to a lot of us. We just want it to survive. I'm happy to help anyone who has any questions, cause why not? I love to share my interests with people who want to listen. I hope this has cleared things up! If anyone has any questions, just hit me up anywhere. Thanks for reading!