Hey! I wanted to make a post where I teach you some norwegian - but more fun stuff, and not the standard stuff you probably learn if you take courses in it. Let's see what I can come up with! Let's start with some words. Here are some words that mean something else than you'd think, and some unique words.

Dress - Suit
Full - Drunk
Pupper - Boobs
Gift - Poison.. and married
Skadefryd - Joy over others getting hurt
Harry - Weird
(Brød)Skive - A slice of bread with toppings. We eat open-faced sandwiches!
Pålegg - The shit we put on it! Can be anything.
Grønnsaker - Green stuff (vegetables)
Vorspiel - Preparty
Nachspiel - Afterparty
Utepils - Enjoying a beer outside (usually starts when it becomes 10C outside)
Helvete - Hell (often used as a swearword, and also the name of Euronymous' black metal shop)
Faen - Fuck (but the word is derived from ''devil'', so ''fuck you'' is ''faen ta deg'' - ''may the devil take you'')
Fitte, mus, høne, dåse - Pussy (literal translations of the latter three: mouse, hen, box with lid)
Pikk, kuk, kølle, snabel, loff, løk - Dick (literal translations of the latter four: club / bat, trunk as in elephant, white bread, onion)

When I worked at Disney World, there were three innocent words we norwegians couldn't say in front of guests, since it could sound like english swearwords:
Faktisk - Actually (fuck this)
Kant - Edge (cunt)
Kokk - Chef (cock)

Thought I'd include this, a famous and funny example of how weird we norwegians are:
Literal translations:
Hæ? - What?
Oi! - Whoops!
Nei, men! (Usually shortened to ''næmmen!'' - No, but!
Ellers? - Or else?
Du? - You?

How about some weird phrases?
Slå / skru på / av - Hit / screw on / off
Trene - Work out
Øve - Practice
Oppmuntre - Encourage
Muntre opp - Cheer up
Smak og behag - Taste and pleasure (a matter of preference)
''Det finnes ikke dårlig vær, bare dårlige klær'' - There is no such thing as bad weather, just bad clothes (norwegians really like the outdoors, ok)
''Å ha bein i nesa'' - To have bones in your nose (basically means that you're tough. I say I have metal in mine, haha!)
''Jeg har en høne å plukke med deg'' - I have a hen to pluck with you (I got a bone to pick with you)
''Å tråkke i salaten'' - To step in the salad (to make an embarrassing mistake)
''Å bæsje på leggen'' - To poop on the leg (Same as above. And when norwegians say ''legg'' we mean the part between the knee and ankle / foot)
''Ta deg en bolle'' - Take yourself a bun (Calm down, or that you're just plain wrong)
"Kjært barn har mange navn" - A dear child has many names (we have many names for the things we love, I guess)

As you probably know, Nemi is norwegian! So how about I translate a strip for you?

''I like old houses.''
''Think about all the history that sits in these walls! People have lived completely different lives here in the same place!''
''Someone might even have died in here! And who knows what hides behind the walls here! A door, a staircase...''
''Down to a secret torture chamber!'' ''I like new houses.''

I bet norse mythology is a big reason why some people would like to learn norwegian or other scandinavian languages. So let's look at some words from the old legends!
Åsgard - Ås farm (''ås'' is the single form of ''æsir''. Now ''ås'' means ''hill''. Åsgård is also my last name! The spelling ''gård'' is just the modern way)
Svartalfheim - Black-elf-home
Helheim - Hel's home (so where the word ''helvete'' / ''hell'' comes from)
Blodighove - Bloody head (At least in modern norwegian)
Jernsaksa - The iron scissors
Skade - Damage (In modern norwegian)
Vilje - Will
Bjørn - Bear
Ran - Robbery
Malstrøm - Maelstrom (did you know that Edgar Allan Poe was the first to use this word in english?)
Vinter - Winter
Natt - Night
Dag - Day
Sol - Sun
Måne - Moon 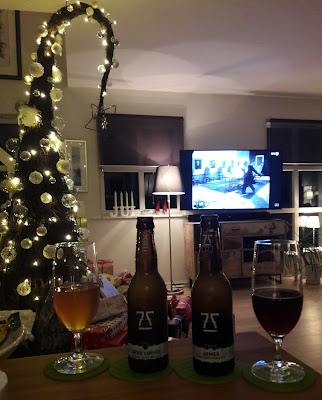 And since the holidays are coming up, I'll share some norwegian traditions with you!
The 13th of december is Lucia day, which comes from a catholic celebration. Children dress in white, wear crowns and carry a candle, and sing the Lucia song. ''Lussekatter'' is also baked!

We still call it ''jul'' (yule, ''wheel''), so we're still pretty rooted to our pagan ancestors.
We call the 23rd ''lille juleaften'' (little yule eve), and a big tradition is to watch ''Dinner For One'', as you can see in the photo above. Local Bergen brewery made Miss Sophie and James beers last year! I just saw in the shop that they have added a Mr. Winterbottom one for this year.

We celebrate on the 24th, and we eat ''ribbe'' (pork ribs) and / or ''pinnekjøtt'' (literally ''stick meat'', salted and dried ribs of sheep). Other foods we eat is julepølse (sausages), medisterkaker (fatty meatballs), and, yes; lutefisk. Earlier in the day we often eat rice pudding, and it's tradition to put an almond into it, and the person who gets it wins a prize (usually a marzipan pig).
In the evening some people go around the tree and sing songs, and children might have ''santa'' visit. We call santa claus ''julenissen'', and we also have ''nisser'', which I guess are mischievous elves? They sell tons of creepy little dolls here. Anyway, then we open presents. This is very much a family day, you usually don't celebrate with friends.

The 25th is ''første juledag'' (first yule day), also a family day. More food is consumed.
The 26th is ''andre juledag'' (second yule day). This day you might spend time with more people than just the family, and going to the movies is popular.
The time between yule and new years is called ''romjul''. Some people go back to work during this time, as the big ''exchange days'' start. We have no shame and spend these days exchanging our presents, haha.

Okay, that was all I could think of! Hope you have learned some fun facts :D
If you have any other questions or requests, I'll gladly answer them, maybe even do another post!
Norwegians reading this: Do you have any fun norwegian facts to share in the comments?
Posted by Caroline Åsgård Skulstad at 3:27 PM