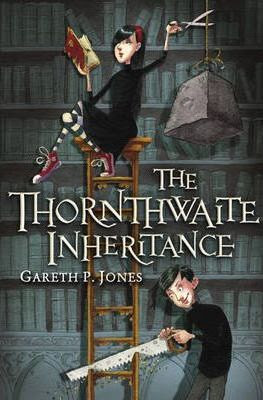 When I saw this I immediately thought of A Series Of Unfortunate Events and The Addams Family, which I both loved as a kid - and still do! So I HAD to read this.

Since it is a kid's book it's super easy to read and has very short chapters, and tons of cliffhangers that would make children go crazy.

Lorelli and Ovid Thornthwaite are 13 year old orphan twins who live in their old mansion with their servants, secluded from everyone else. Their entire lives they've tried to kill each other with creative plots, but on their 13th birthday they decide to have a truce. But the murder attempts still continue...

There are so many twists and turns, especially towards the end, which maybe a little too much for children to keep up with.
***SPOILER ALERT*** (mark to read)
But one thing that bothered me at the end which made me turn back to the beginning and check; It was said that the phone call that killed their mother was made by a man calling his wife to warn her about the storm, and that he didn't know the Thornthwaites at all - but that wasn't true when everything was revealed at the end.
******

I will definitely read the next book in the series! I would definitely recommend this for spooky kids, from about 10 and up.

You can buy it for a very low price here!
Posted by Caroline Åsgård Skulstad at 8:03 PM