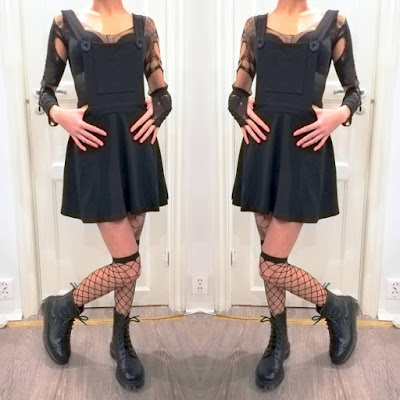 So me and other people from the Gothy Discord have been using this hashtag Aytakk came up with (he also came up with #toiletgoth), and it seems to have been causing some ruckus on the internet. I didn't think that I would need to explain the meaning of the hashtag in detail, but here we go.

There are a lot of problems with Killstar and Dollskill, but I'm not gonna bother to go into those. Cause the main problem is the marketing, and that brands like this have completely taken over goth on the internet. This makes people think that goth is about overpriced clothing, and nothing else. I've personally seen and talked to SO many people who say they ''can't afford to be goth'' because they think the expensive brand clothes are a requirement for being goth. THIS IS WRONG.

If you are ONLY wearing goff brand clothing and not participating in the scene in any way (and by that I mainly mean listening to the music), you are literally a poseur. Yup, I said it. That word comes from when some people would pose for photos when random people asked them to. Now I wasn't there, so I don't know if they were ONLY in it for the fashion, but this nevertheless left a bad taste in the mouth of the other people in the scene, probably because it leaves the impression that it's just a fashion thing. Killstar (or any other brand) doesn't make you a goth, like putting on a chef's uniform doesn't make you a chef, or a full outfit of Adidas doesn't make you an athlete.

THAT is what the hashtag means. But, I apparently also have to explain what it DOESN'T mean! Yes, you CAN wear goth brands if you want to. You can spend your money however you want, and wear whatever you want. That's not what we're saying here. Goth doesn't have a uniform. We celebrate creativity, and goths have been thrifting and DIY-ing since before it was even called goth. Remember our roots! It came out of punk, those kids didn't have a lot of money, but they still formed the look we associate with goth today. And sidenote, goth doesn't ''own'' black clothes, eyeliner, fishnets, bondage gear, big hair, leather, pointy shoes, boots or anything else. Goth has borrowed a lot from trends and other subcultures. Anyone can wear those things, but that doesn't mean they're a goth. I've seen several ''normal'' people wear shoes that look a lot like winklepickers around lately. Pretty much everyone has black clothes - and every person who wears make-up probably owns black eyeliner. So no article of clothing (or amount of it) can make you a goth.

This isn't shitting on babybats and newcomers to the scene - in fact, quite the opposite. We're trying to help them out by informing them that goth isn't about expensive clothes and an extravagant look. You can be goth without even looking like it. If you want to, awesome, but if you can't, that doesn't mean you're not good enough (I've literally seen people say they think they aren't because of that). When I was younger, I definitely bought from alternative brands, cause I didn't know any other way to look cool. I still have and wear those things, but in recent years I've learned to DIY and I've pretty much only bought stuff at thrift stores and sales - mostly at H&M, but goth brands too.

I'm not sure why people have been shouting elitist gatekeeper at this. Nobody is saying you CAN'T wear Killstar or any other brand. It doesn't make you ''less of a goth'' either (nothing does - unless you're not a fan of goth music of course). We're not telling people what to do with their lives. The hashtag is just meant to be what it literally says; ''Goth is not Killstar'' - cause it isn't. Not ''Killstar makes you ungoth'' or anything else.

If you have any questions, concerns or anything, comment below!
For further reading, check out Aytakk's newest article on The Belfry!
Also check out Kelly's video on the topic!