Disintegration by The Cure Review 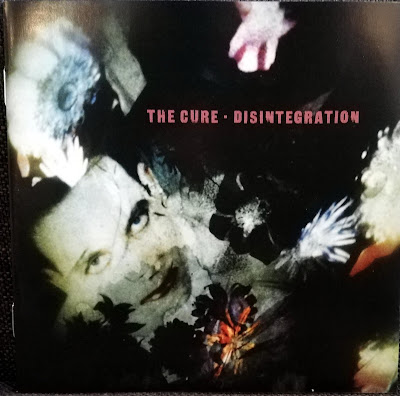 It's 1989 and The Cure are back with their previous goth sound! Robert Smith was turning 30 at the time and was having a bit of a crisis coming to terms with that (oh please, he had done so much already). He also didn't like how popular they had become (well HE made pop music in protest to being perceived as goth), and started using drugs again. Lol Tolhurst struggled with alcoholism, and could barely contribute, so they officially hired their touring keyboardist Roger O'Donnell. Things were hard for them, but according to O'Donnell ''It was never a serious atmosphere in the studio, and when you think about the album and how dark it is, I'm sure people think we were sitting around slitting our wrists with candles and chains hanging from the walls.''

Plainsong
Chimes open up the album, before it explodes into.. bliss. The keyboards get to shine before the guitar comes in. Robert sings softly, and there's some delay, which goes really well with the atmosphere of the song. The lyrics are kind of sad, but still beautiful.

Pictures Of You
Into another dream we go. I can only imagine how many young goths has listened to this after a heartbreak over the past 30 years. The lyrics are so beautiful, and they work for different kinds of loss. Robert's voice gives me goosebumps! The guitars are really good too.

Closedown
Tribal-y drums, but what shines in this song are the keyboards - that's what makes the song memorable to me. The guitar is nice, but they are after all very typical of this album. But to me this is kind of a filler song. The lyrics are really sad. 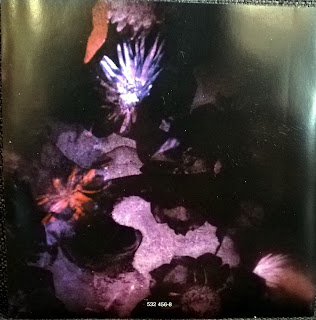 Lovesong
What, a HAPPY song?! I guess everyone knows this song. As you probably know, it was Robert's wedding present to his wife Mary. Will definitely play this at my wedding (and probably Aurelio Voltaire's cover as well). The lyrics are very simple and repetitive, but they work really well. Like the other songs on the album, the keyboards really make this song, but the guitar is good too.

Last Dance
Love the bass in this - the guitars are great too! I like that the keyboards are more in the background this time. Again the lyrics are about memories with a girl / woman.

Lullaby
This song is so fantastic, it's so unique! The guitar and violin work really well together. While it could work as a lullaby, it's still terrifying - Like Robert has said himself, the lullabies he heard as a child had a scary ending. For me this is especially scary, because I'm terrified of spiders. So I'm not much of a fan of the music video! The whispery singing is really cool, though kind of hard to sing along to!

Fascination Street
Now this one is more rock! A goth hit, not very unlike ''Burn'' they would release for The Crow soundtrack some 5 years later. Both fantastic songs! 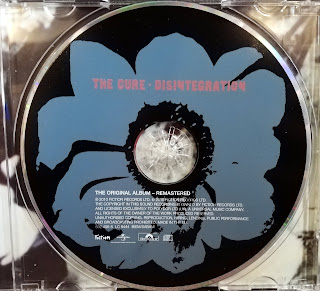 Prayers For Rain
Really like the backwards effect and the ''deep rumbling'' of the keyboard and bass behind the guitar at the start of the song. Then comes the ''grand'' keyboards that are so distinctive for this song. The little guitar melody is great too!

The Same Deep Waters As You
Like other songs on the album, the keyboards dominate the song, with a picked guitar melody inbetween, and Robert melancholically singing about a woman. But this time underwater during a storm!

Disintegration
I like that this one is more guitar and bass driven - but I like the little keyboard melody, it makes the song more distinctive! Fittingly the title track of the album, the lyrics are raw emotion. He sings it with such feeling that it gives me chills!

Homesick
Love how the piano and guitars work together in this one, it's really beautiful. Really a song to get lost in! This was apparently Lol Tolhurst's only contribution to the album. And it's a good one!

Untitled
It annoys me that this is called ''Untitled'', haha. The intro is refreshing and different, and then goes into the typical sound for this album (with barely any keyboard). This goes back into the theme of the album again, with sad memories about a certain person. 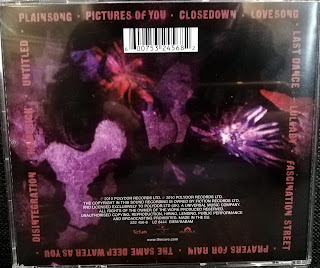 Needless to say, I love this album. What goth doesn't? This is a must-have album, especially recommended as a ''babybat's first The Cure album''! Though I also recommend getting one or two compilation albums, since they have so many different sounds. Anyway, this album is actually 70 minutes long, almost as long as the last one! But on this one the songs are really long, up to over 9 minutes! I don't even notice, all of the songs are really good. The album has such a great gloomy atmosphere! It's no wonder it is their best selling album, even now, 30 years later. I watched their Disintegration at the Sydney Opera House livestream, it was magical! Can't wait to see them. Only 3 weeks left now!
Come back on Saturday for my review on Wish!
Posted by Caroline Åsgård Skulstad at 5:48 PM