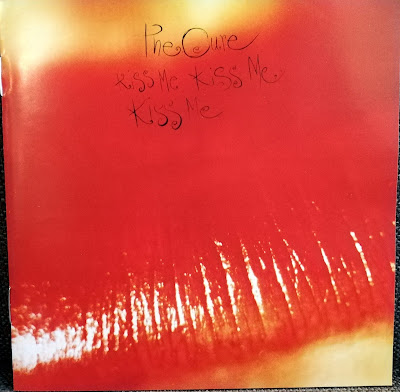 This is a double album, but they managed to fit it on one cassette / CD (Hey You was not included on the original 1987 CD release). We've got 18 songs, lasting one hour and 15 minutes. Here we go!

The Kiss
The album starts off with a strong bass, but otherwise pretty slowly. Loving that guitar! Robert Smith doesn't sing until almost 4 minutes in, and fittingly the first line is the album title. I love his singing on this.

Catch
A short and sweet song. The lyrics are so cute! They're what shines in this song, everything else is kept pretty simple and in the background - but the violin is a nice touch!

Torture
A more gothic song - and Robert sings ''vampire bat'' in the chorus, so there you go! I love his voice so much. The little keyboard part towards the end is pretty fun.

If Only Tonight We Could Sleep
Another of their exotic-feeling songs. A very nice and calm song to let your mind wander.

Why Can't I Be You?
And now we dance! This is still one of their big hits. It's very new wave / 80s pop. I dare you to sit still when you hear this! 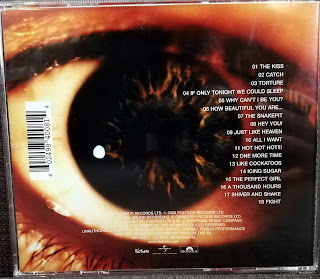 How Beautiful You Are
Also a cheerful-sounding song with keyboards, piano and violin - but when you put it after the last song, it kind of pales in comparison.

Snakepit
Great guitar in this one, and kind of an exotic atmosphere again. It stays very the same for almost the entire 7-minute run, but gets a little bit more interesting towards the end.

Hey You
This song perks you up again! Lots of fun keyboards, and even some sax! There is some good guitar in there too, but pretty hidden for most of the song. Also in this too Robert wants you to kiss him, haha.

Just Like Heaven
Ahh, one of their most famous songs! That guitar just takes you up in the clouds, like new love does. The acoustic guitar, keyboards and piano really add to the feeling. It's such a beautiful song, and especially the lyrics. Will definitely play this at my wedding!

All I Want
Now we go back to a similar sound to Snakepit again. The guitar is pretty ''harsh'', but the keyboards and piano softens it. 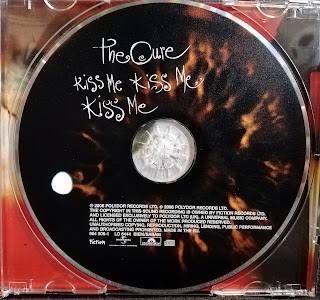 Hot Hot Hot!!!
Hilarious song. It's so funky! I guess this is the sexiest Robert Smith has ever been, most of the time he's just adorable. The keyboards after the chorus are really cool.

One More Time
Ahh, this one is so beautiful and lovely! Slow and soft drums, the long keyboard notes, dreamy guitars, the flute(?) and all the other sounds they put in there. So ethereal. Robert's singing and the lyrics are making me dramatically lift my arms towards the sky. A very emotional song.

Like Cockatoos
Now this one is pretty different! Acoustic guitar, dramatic keyboards and experimental sounds create an almost eerie atmosphere.

Icing Sugar
Tribal-sounding drums and saxophone! Great bass, and I like the guitars too, but they get hidden behind everything else most of the time. Closes with a cute little music box melody.

The Perfect Girl
I thiink this is / was a hit, but not as big as the singles from this album. I really like the cheerful melody. The guitar reminds me of Siouxsie & The Banshees' cover of ''Dear Prudence'', which Robert played guitar on. 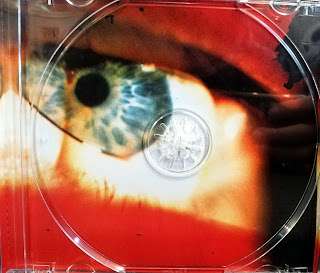 A Thousand Hours
A calm and emotional song. Great keyboards and piano. This gives us a taste of the sound we'll hear more of on the next album; Disintegration.

Shiver And Shake
In this one they step back into the (post-)punky / gothrock spirit, it's more harsh and aggressive, it kind of sounds like they're just jamming.

Fight
Love the guitar in this one! The ''Fight fight fight'' part is really good. The lyrics are great, and they close out the album with the message ''So when the hurting starts, and when the nightmares begin - Remember: you can fill up the sky, you don't have to give in - Never give in''. A strong ending!

This album shows you pretty much everything that The Cure can do. From pop to funk(!) to dark rock to ethereal songs that will take you away into another world. It really takes you on a long journey (this album can last me an entire flight to Germany). It's hard to summarize the album because of that, there's far from just one feeling or atmosphere! I guess it's mostly pretty fun and light when you compare it to their gothic trilogy. It was a huge commercial success, just like the last album. But Robert wasn't much of a fan of that, so for the next album they went back to their goth sound. Come back on Wednesday for my thoughts on Disintegration, which according to South Park's Kyle Broflovski is "the best album ever"!
Posted by Caroline Åsgård Skulstad at 6:18 PM