This year was our very first M'era Luna. I had been hesitant to go before, because it seemed like more of a classic festival (ie. camping, few stages, tons of people in one place, etc.). But my friend Benedikt offered me and Simen to stay at his apartment, so we decided to go! The line-up wasn't super great, but we decided to do it for the social aspect, like with Subkult last year. WGT this year was also pretty social for me!
So here's how it went! 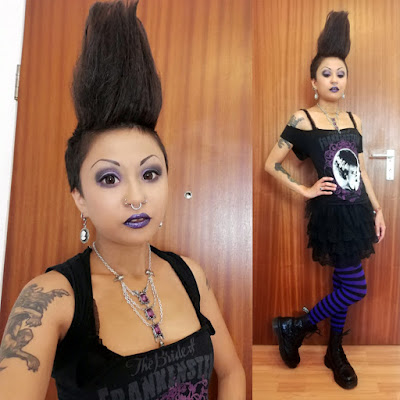 My look for the Friday, when the festival hadn't officially started yet 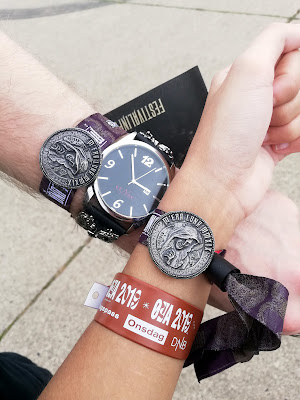 Super cool wristbands with Alchemy Gothic coin!
Gonna make mine into a choker. Will put up a tutorial! 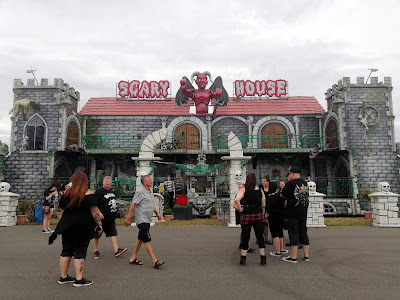 A haunted house that was funny to walk past. 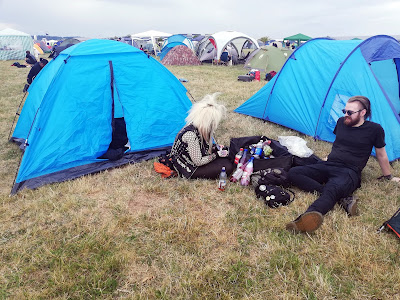 We found Wednesday, helped set up her tent and hung out at the campsite. She had traveled with the Goths On A Bus group, mainly brits who take buses to the festival and camp together. My friend Oliver had invited us to the group's pre-M'era Luna dinner, so we found others at the campsite who were going, and went together. There was a shuttle bus every 30 minutes to the main station, but that wasn't included in the festival ticket. The restaurant building was beautiful, it was built to look like German medieval architecture. After the dinner we went back to their campsite, hung out for a bit, then we decided to go to the festival area and check out the party. But it was PACKED and there was a line (plus it was €5), so we checked out the shopping stalls and the medieval market, which had a band playing. We went back to the camp, but everyone was asleep, so I messaged Simon, and we went to his campsite until we were tired, then took a taxi back. 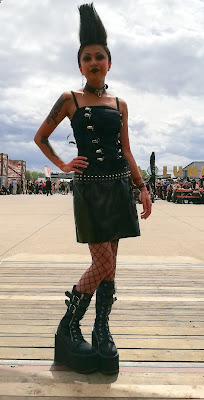 Outfit for the first official day 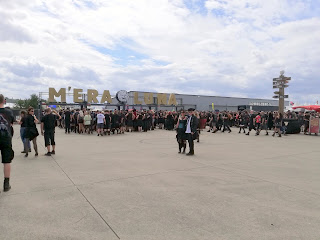 Cue for the main festival area 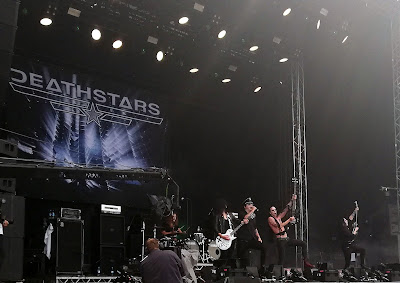 We watched Deathstars, which was really fun.
I haven't listened to them for years, so I owed it to teenage me!
They're really good live. 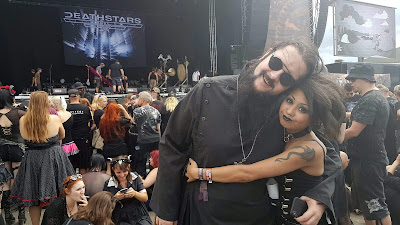 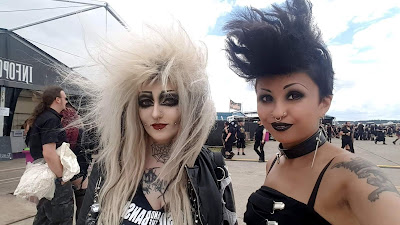 
And like at WGT with Daniel, we made sure to take our absent friends! 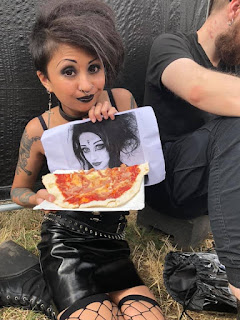 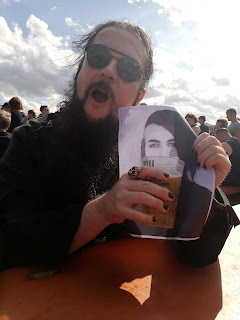 The rest of the day me and Simen were just chilling, exploring the festival area and stuff. We sat down outside the hangar stage and watched Agonoize and [:SITD:] on the screens. A pretty chill way to see shows, if you ask me! 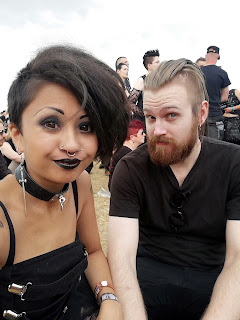 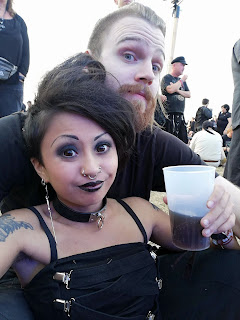 See, this is why we never take selfies.
He looks fucking terrified! 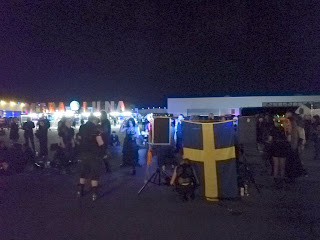 Ended the day with the swede's afterparty! 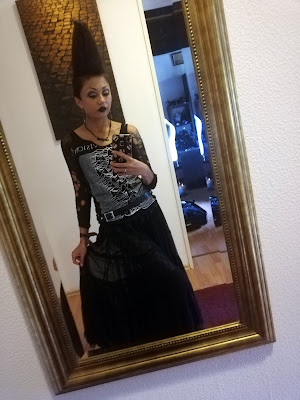 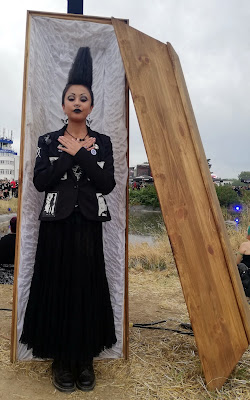 We made sure to go into the festival area with lots of time before Fields Of The Nephilim. Me and Wednesday made it to the second row! We might have huge hair, but we're both very short, so normal people can still see above our heads, hahaha. We squealed like little girls when they came on. Carl McCoy has barely aged! I was super curious about that, since there aren't THAT many photos of him online. They were pretty good, but oh my gosh, there was so much fog. At some points you couldn't see the band AT ALL! Luckily the wind was blowing, but the fog machines were working hard throughout the entire show. But we still saw them right in front of us, now we can die happy! No wait, I'm seeing Sisters Of Mercy next month. 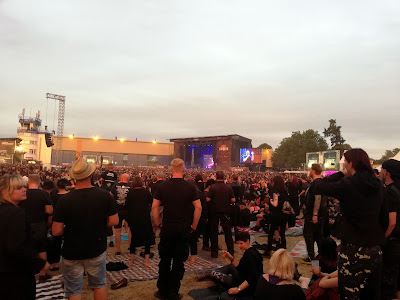 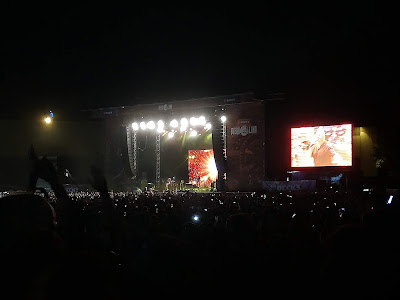 We moved further back for VNV Nation, so we could actually BREATHE and I could dance. Somehow we had never seen them before, so it was about time! Man, what an amazing show. The dancy songs were great of course, but the slow songs were remarkable. Such a great atmosphere! Though during those songs you could hear Suicide Commando from the hangar stage, which was pretty funny. So with that the official part of the festival was over! 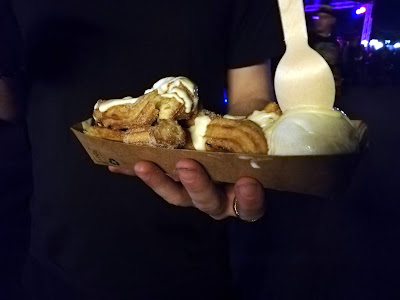 We went back to the british camp with Wednesday, and hung out in their gazebo for a few hours. It was really fun! Someone kept running in and throwing glowsticks everywhere, so I started sticking some in my hair, and suddenly everyone was using my hair as a ring toss game! It was hilarious. I think the photo below is shortly before it toppled under the weight, but it popped straight back up again after I removed a bunch of the rings! We took a bunch with us over to the swedish afterparty, and Simen gave almost every person there one to wear! He even took the ones in my hair, so I ended up with none at the end. When security was getting mad, they packed down the party tent and took the equipment away (they were also going to drive all the way back to Sweden afterwards). Then we got a taxi back. The driver took photos of us to send to his wife, hahaha. By the way, almost nobody speaks English, but I know enough German to get by. 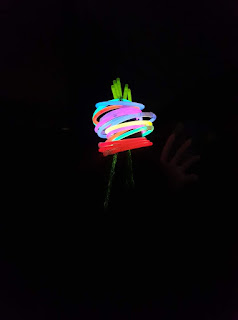 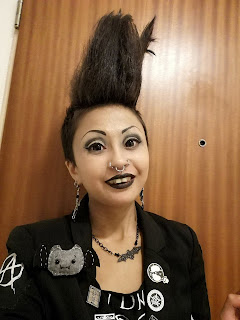 The next day we slept a little later than we had the previous days, and just chilled at home. We had a little barbecue party, yumyum! Me helping myself to a bunch of garlic butter made me invent #KnoblauchGrufti (garlic goth). So that's a thing now! The rest of the evening we listened to music and talked. We saw a tiny bat flying outside too! So goth. We went to bed pretty early since we were taking our first train at 06:55. 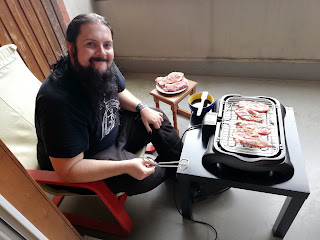 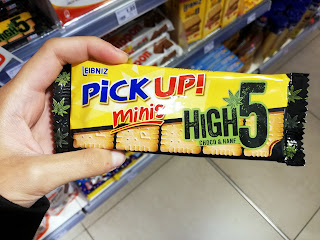 Excuse me Germany, what?

The journey home was pretty damn smooth! Everything was on time, and we didn't even have to change platform at Berlin Hauptbahnhof between the train from Wolfsburg to Schönefeld. So that was really nice, considering I had only slept 4 hours (which made me sleep for 16.5 hours when we got home!). 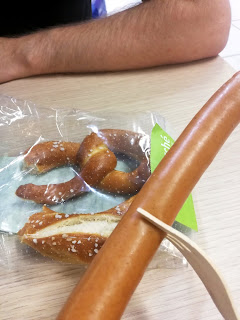 A proper goodbye to Germany, I guess?

That was it! I know this is getting very long, but I wanted to put some reflections over M'era Luna at the end. Me and Simen are pretty spoiled with having gone to WGT a bunch of times, so we knew that this wouldn't be as great. We don't like camping, and there weren't many bands we wanted to see. But we found out that camping IS part of the experience, so if / when we go back, we'll consider that. Definitely not the Gothic Garden though, that's just insanely expensive for glamping, even though it's convenient. Regular camping is included in the ticket, which is nice. Also you get a plastic trashbag with your wristband, if you return it with trash (I heard it didn't need to be full), you'll get €5, which you already paid as a deposit with the ticket. The toilets were pretty good, they had waterstations and showers, and even a styling tent. The food is good, but expensive. The drinks were fine, but also expensive, and you couldn't return the cup anywhere on the area (each cup comes with a €2 deposit).
The medieval market was really nice, similar to Heidnisches Dorf at WGT, just smaller. The shopping on the rest of the area I wasn't impressed with, nothing I hadn't really seen before, and most of it was pretty expensive. They had other stuff too like readings, fashion shows and stuff, but we didn't attend those. Not their official afterparty (€5) either, and it was only on Friday and Saturday, plus inside the festival area so you had to adhere to their weird rules. Only bumbags or a clear gymbag, no drinks, no pro cameras, etc. So I think it's best to party outside, so you can have your own drinks! They have small lockers you can rent if you don't wanna go all the way back to your tent. Wednesday's had a charger inside too, which was a nice touch!

I was actually surprised that the large crowd of people didn't bother me. It wasn't THAT hard to get to the front of the main stage, and there wasn't long lines at stuff all of the time. I also thought M'era Luna would be with more ''fabulous'' people, but I only saw a few. Most people were very casually dressed, and of course most of them weren't goths. It's a pretty diverse festival, people brought their kids, there were older people, you had people in wheelchairs and even blind people! It wasn't diverse when it comes to skin color though, most people where super white and some looked like lobsters cause they were so sunburnt, haha.
We did have a good time, it was pretty chill, but it's not really comparable to WGT. It's not a goth festival (there was literally ONE goth band playing), and it's mostly the same bands playing. If you like industrial, EBM and metal, and the classic festival experience, I'd say you should try it out. I don't really recommend staying outside the festival area, since you have to walk for a bit to get to a taxi or bus, and then you have to pay for that. I'm at least glad we have checked it out, but unless there will be a really good line-up (so not next year lol), we probably won't return. We'd rather check out other festivals, like Amphi or Infest!
If you have any questions, I can try to answer them! Hope you enjoyed my report and reflections over it, and helped you decide if it's a festival for you or not.
Posted by Caroline Åsgård Skulstad at 6:05 PM