On the 7th I flew across the country to Oslo to see The Cure for the first time! I did myself up before I left, and only traveled with my everyday bag. This is what I wore! Tutorial on the dress / how to take in band shirts here. 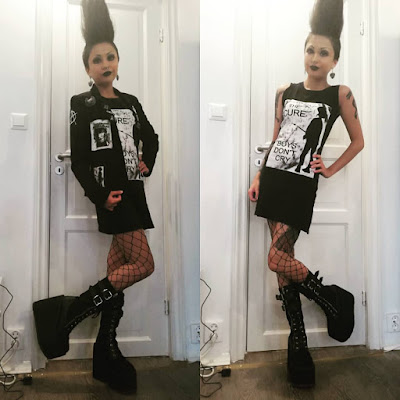 I met some people with a mutual friend at Rock In bar who were also going, so we went to the festival area together. The area looked really nice, it reminded me of my local festival Bergenfest, only much bigger. We decided to go over to the stage where they were playing while the previous band was still playing, and got to the front pretty easily. Then it started raining, and I put on a poncho! It looked so ridiculous, and didn't save my hair at all, hahaha. 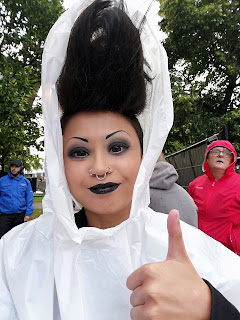 I met up with Eveghost (who is about my height, omg), and we stood at the front row relatively center together. I think we waited for 1,5 hour, and luckily The Cure were perfectly on time! 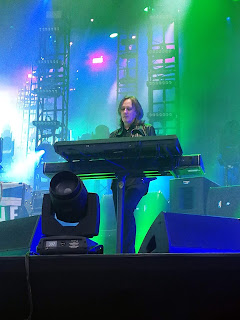 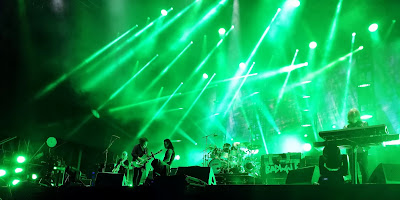 Aaahh, they were so great! The entire band were super happy and smiling - Robert was adorable dancing around. They looked like they had a blast. The set was 2 hours and 15 minutes long, which included 27 songs, a bunch of them from Disintegration. See the whole setlist here. They stuck to the rules of Øya and finished at 23:00. I've heard they like to play even longer sets (Robert looked like he didn't want to walk off stage after the encore), but I was still really happy with this one. I couldn't believe they were standing there right in front of me! Even though I might be biased because of my starry-eyed first time seeing them, people who had seen them (even multiple times) before could vouch for that they were great. Even after all these years, they've still got it! Go see them if you can, while you still can! They've been around for a long time, but they won't have this stage energy and fan appreciation forever (and I suspect they will stop when they don't anymore). So for me this was definitely worth the trip!

After the show we went to Rock In again, where I met up with a bunch of people. The clock struck midnight, which meant it was my 25th birthday! One of my friends got them to play Temple Of Love (the original version) for me. But I soon had to go catch the last train, since I was spending the night at Marthe's place. The next day I was off again! I met Simen at the airport, and while we waited for our flight to Berlin we had some cheesy fries and a beer. 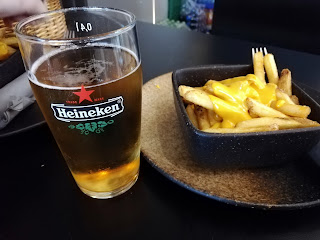 We got to Berlin, and three trains later it was midnight yet again, and we arrived in Hildesheim. Benedikt picked us up and drove us to his apartment, where this welcome package waited for us: 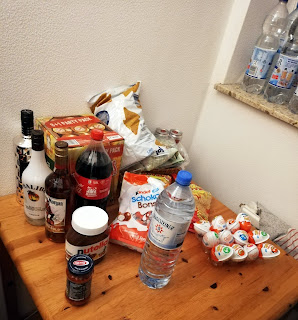 He is insane, haha! We stayed up pretty late having some beers. Then to bed, cause the next day was pre-M'era Luna day! My next post(s?) will be about the festival, so make sure to check back soon!
Posted by Caroline Åsgård Skulstad at 12:26 PM