What We Do In The Shadows TV Series Review 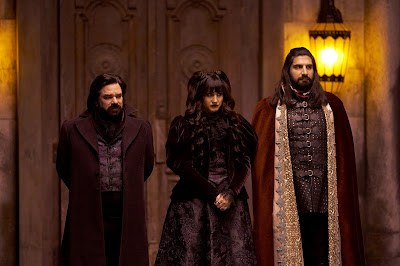 Like most goths, I absolutely love the movie. I've seen it several times, and it's still funny every time. Now the same creators have come out with a spin-off show, this time set in the US, featuring different vampires. I recognize Matt Berry (Laszlo) from The IT Crowd, he's pretty funny! They use the same song as the theme song, the photos are just of course switched out with the actors in the series. I think that was a really cool touch to tie it in with the original.
Also worth mentioning, there's another spin-off series called Wellington Paranormal, featuring the police officers from the movie, but I haven't seen that yet. There's also talk of a werewolf spin-off series too. So all of this is fantastic for all of us who are still referencing the movie all the time!

I'll just take you through my thoughts as I watched the show:
The three main vampires have very elaborate outfits, they look like they could be from goth brands. Nadja's fashion corsets irk me a little though, haha. I really like the addition of the energy vampire - and the emotional vampire we see briefly.
The make-up job on the Baron was great. That must have taken quite some effort!
A fun fact for you: Nick Kroll, who plays Simon the Devious in episode 4, is the voice of Uncle Fester in the new Addams Family movie coming soon!
Episode 7; The Trial is amazing, I think that's my favorite episode of this season. It's hilarious, and I love that it's starstudded with actors who have played vampires in other movies and shows, and the ones they mention are also names of actors that have played vampires! And of course, the three vampires from the WWDITS movie. By the way, the well scene in Interview With The Vampire really stuck with me when I saw it as a child. Glad to see it referenced here! I also really liked the thing with Nadja and Gregor. Not gonna say more so I don't spoil anything. 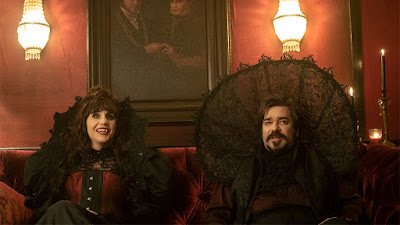 The season flew by super quickly! Took me less than 24 hours during weekdays. The episodes were pretty short - only the first one was 30 minutes, the others came closer to only 20. Overall I think it was pretty good. I don't think it was better than the movie, though. Some of the jokes were reused (understandably, cause they're now reaching a bigger audience who might not have known about the movie), but they did get creative with new stuff as well. I feel like they kind of forget about sideplots pretty quickly though. Some of them got revisited again and resolved a little later, but still.
I think it would be better if they had fewer and make time for them in each episode, and / or introduce them later.

I am still really excited for the next season! Shame we have to wait until next year though. I'm hoping Wellington Paranormal will be available internationally soon, so I can watch that too! Have you seen the show? What did you think of it?
Posted by Caroline Åsgård Skulstad at 3:30 PM