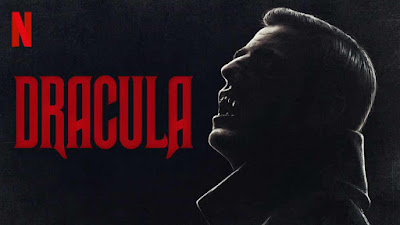 Ok so I'm sure most people have heard of this by now! I actually didn't know about it until I saw a review in the local paper, and just a couple of days later I got messages from several people. Oh you know me so well. So now, let me tell you what this Dracula / vampire nerd thought about it!

The series consists of three almost movie long episodes, similar to the new A Christmas Carol which came out recently (which I highly recommend, by the way! It's really dark and has interesting backstories). Dracula is played by Danish actor Claes Bang, and he's going for the more sexy (but mature) vampire. I'm really impressed by his English, I have to say.
The show has a very Mark Gatiss and Steven Moffat style, they got the same composers too, which was pretty easy to hear. They kept some aspects from the book and some inspiration from other adaptions, but it's overall a very ''Sherlock goes horror'' vibe, kind of mindfuck at times, like the last Sherlock season. I know Gatiss loves horror, I remember I once stumbled over his documentary series A History Of Horror. Speaking of, they made a documentary for this as well, called In Search Of Dracula (fun fact; Jonathan Ross did one with the same name in the 90s). I couldn't find that, but if / when I do, I will watch it. 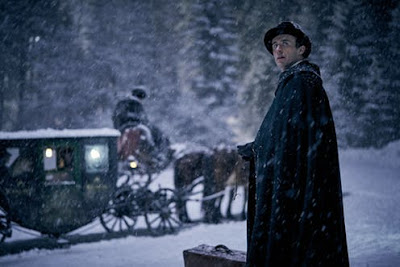 The next three paragraphs consist of my thoughts while watching each episode:

Why are there so many flies?! Disgusting. I was prepared though, I know stuff like this can feature insects, so I made sure to finish my food before I started. But good news; no spiders!
Ok looks like we're going for the ''Harker and Renfield are the same person'' angle.
The nun is super inappropriate, but through her we get flashbacks to Harker's trip to Transylvania - with some annoying interruptions when she asks questions.
Dracula is a parody of himself. Did not like our first moments of him, when he's old looking.
But the rest of the first episode was decent, there was a lot of action, and it wasn't predictable. I recognise the castle as the same one from Nosferatu (1922)!

Episode two is in the same style as the first in terms of narration, but this time, bizzarely, Dracula is playing chess with and telling van Helsing about his journey on the Demeter (the episode is fittingly titled Blood Vessel). And apparently their conversation and game turns out to be some kind of dream sequence? I'm not quite sure. Jonathan Aris plays the captain of the ship, and among the passengers are newlyweds Lord Ruthven and Dorabella. I like that in this adaption we actually get to see what happened on the Demeter, which we don't in the book or most other adaptions. The end of the episode left me a little confused. See next paragraph!

Okay I can't possibly leave this out; the third episode takes place in the present.
We meet Lucy Westenra, and I really love what they did to her character. A woman of color who gets tons of likes on Instagram and goes night clubbing - a modern party girl! The perfect way to modernize Lucy. What happens to her here is even more horrible than in the book, you actually feel bad for her, while book Lucy is more ''good riddance, you were annoying''.
Of course Jack Seward, Quincey Morris and Arthur Holmwood make appearances, but only Jack is of importance. We barely get to see the others, really.
Also, I was wrong about one of the first things I thought when I started this; Renfield actually shows up! Played by Mark Gatiss himself. It's fun to see Dracula and Renfield actually interact.
One thing I came to think of; since Dracula is first shown looking ancient, and gets younger after feeding on Jonathan, why is he still young when he wakes up in the present? He hasn't had blood for 123 years, but doesn't seem hungry.
OMFG Dracula using Tinder, now THAT is hilarious. Nice spin on ''children of the night - what music they make'' and ''bloofer lady''.
I feel the ending was very... Sherlocky. I don't know how to feel about it. Also I didn't mention this before since it's kind of a spoiler for the first episode, but I just have to say that making van Helsing a woman and ''reincarnating'' her was a nice choice, even though that has been done before. 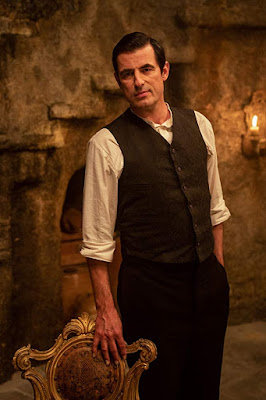 So in conclusion; I actually feel very similar about this as with Sherlock. It's not THAT great, but fun to watch, it can fuck with your head and frustrate you. I'd say if you enjoyed that, give this a go. And don't give up immediately, I know some people did that, and I can understand why, the first episode had quite a rocky start, but it got better. They were obviously not going for making another ''WE are finally gonna be the ones to stay true to the book!'', not at all. And I think that's a good thing. Dracula (and Sherlock) are literally the two characters that have been adapted the most in literary history, and I think they did a pretty decent job at bringing new life to and modernizing them.
Posted by Caroline Åsgård Skulstad at 6:31 PM No comments:

Will my cat eat my eyeballs? by Caitlin Doughty Review 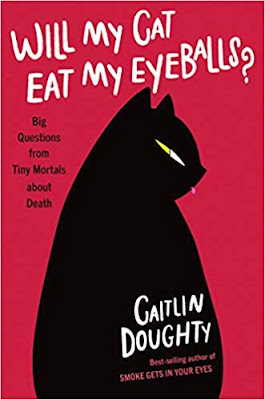 “I'm bringing body back. Returning corpses, but they're not intact.
Kids, this is a Justin Timberlake reference.
You're fine not knowing who that is.”

I have been following Caitlin Doughty ever since she started out on youtube. Her very first sponsor was Audible, so I decided to try an audiobook for the very first time since I was.. a toddler. And of course I chose one of her books! I've been listening to her voice for years, so I thought that would be fitting (I read 700-1000 wpm, so I don't really like being read to).

Listening to it is like listening to a playlist of her videos. She's a very good narrator, in this case I think it was very fitting that she recorded her own audiobook. Nobody else could have read this like she does, and kept with her humor.

Caitlin answers 35 questions about death from kids, dedicating a chapter to each. She answers them really well, and gives a lot of facts related to the question. It's really interesting! There's science, humor, history and death customs around the world.

Now I'd say this isn't a book for ALL children. I think they'd have to have been talked to about death, and understand that what happens to bodies after death is a little icky. There are also medical terms and other words in it that might be difficult to understand for children (sex is also mentioned).
So if you're wondering about the book being suitable for your child, that really depends on the child and their knowledge, experience and state of mind.

I also think this book would be entertaining to a lot of adults! Not the squeamish ones though. But if you're interested in death, this is a great way to learn some new things. And of course Caitlin's Ask A Mortician youtube channel!

Links:
Get the book!
Audible
Her other books
Youtube