I recently made my very first ASOS purchase! My friend Teresia shops there a lot, and she always looks amazing, so I finally decided to give it a try! I mainly wanted belts, since I've really been loving them lately. I found one belt that I saw Louise had, I complimented it, but I thought it was several, turns out it was once piece! So when I saw it, I had to have it. I love it so much already! 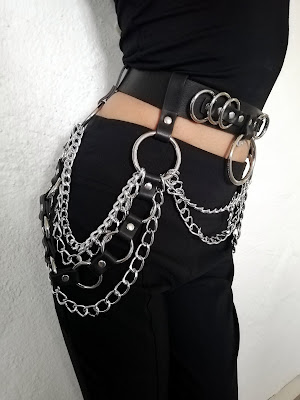 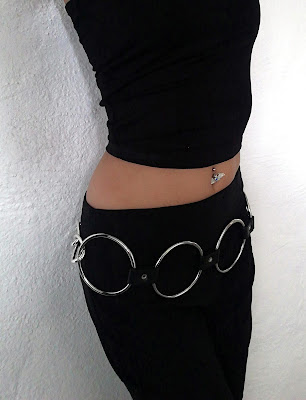 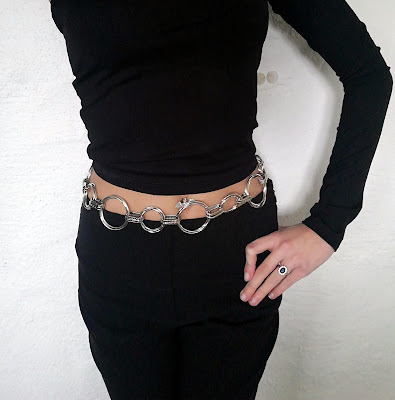 I'm really happy with my order! Everything was relatively cheap, and I spent enough to get free shipping. Got slapped in the face with taxes and customs when I picked it up though, which added up to be half the order value. Life in Norway! I ordered in the evening, and it was shipped the next morning - I think it's the norwegian postal service's fault that it took closer to two weeks to get here.

ASOS seems to have a good range of sizes, they have petite, tall and plus size sections, often the same products for different sizes, which is pretty cool. I was a little scared the belts would be too big for me, but Teresia found a size chart, and the waist of the smallest sizes would fit me (but not the hip). The belts I bought are meant to be waist belts. The first one fits both my waist and hips, the second and third only fit my hips and waist respectively. I might be able to get the second one around my waist, if I ONLY use the O-ring part and let the chain part hang down.

Can't wait to put all of these into use along with different outfits! I think belts like this are a really good way to jazz up even the simplest of outfits. I'm definitely a fan of low effort, especially cause I suck at remembering to accessorize. But I've gotten better! And there's nothing like getting pieces you're really excited about to motivate you.
Posted by Caroline Åsgård Skulstad at 3:54 PM 2 comments:

About a month ago we planned to go out to eat before this month's goth night, cause Simen had a weekend off for once, and got paid a couple of days before. A while later I saw a Valentine's meme on facebook and realized what day we had planned this on... I asked Simen if it was on purpose, and it wasn't! So we made sure to get a reservation, haha. I also pointed this out to the goth night DJs and asked them to play Friday I'm In Love, since it'd be perfect! I also pestered them with more suggestions up until the day of, haha.

So here's my look!
Decided to go with a dress, since I wear them so rarely.
This one is thrifted, it's so cool and fits pretty well!
I'm actually wearing it backwards.
Red eyeshadow and stockings cuz luuuv. 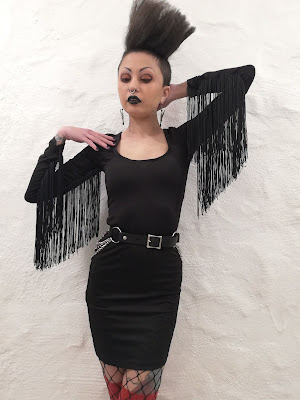 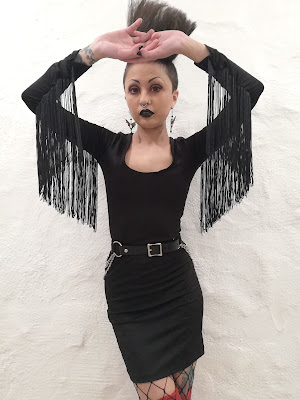 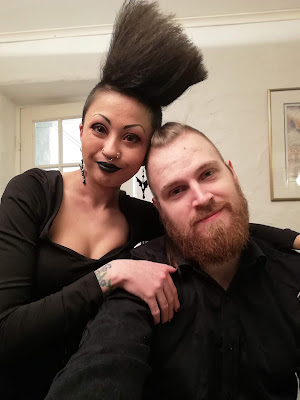 I managed to get a good photo of us!
This took many tries, haha.

We ate at Jamie Oliver's Italian, which is a relatively new restaurant here, I've wanted to go there since I saw it opened. We got there a little early, so we ordered drinks at the bar while we waited. I got a blackberry amaretto sour (really good!) and Simen got a rosemary negroni (the rosemary actually did a lot). The food was really good, and it wasn't super expensive. I'd definitely go there again! I of course had the carbonara, since that's my favorite dish, I could eat it every day. It was angel hair pasta, with A LOT of bacon - including a random thin slice of crispy bacon on top, haha. Simen liked his burger, and the fries were really good. Just after I took the photo below the server came with fresh parmesan for me, and gave Simen an aioli - which was DELICIOUS. I love aioli, but hate when they barely taste of garlic. This one tasted SO strongly of garlic, haha. 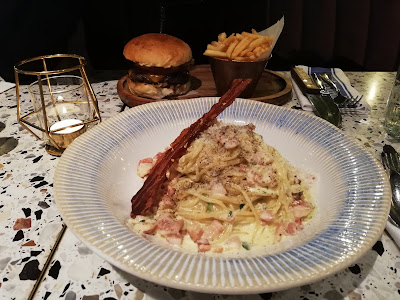 We were so full we couldn't do dessert, so we went to where goth night is held (the bar Simen works at, which he just became bar manager of) and hung out with his coworkers before goth night started. Simen got the DJs to play The Mission's Butterfly On A Wheel and we awkwardly slowdanced alone on the dancefloor. Hilarious and sweet. We probably won't even do that at our wedding, haha!

Here is the playlist for the night:

We sadly had to leave at 1, cause Simen is actually sick. He has a fever and everything! He's such a trooper for have lasted that long. He knew I had looked forward to it since we made the plans, but when I noticed he was almost falling asleep, I told him if he feels he needs to go home, we're going home. Funnily enough we left during Kælan Mikla's Sýnir, which meant we JUST missed this:

I'll listen to the rest of the playlist later. I started working on our wedding playlist this week, and I sent it to one of the DJs for inspiration, and I was sure they'd play other stuff I could put on it too. It's already super long already, probably more than we need, but that's just how it is, haha.

Today we planned to stay at home anyway. Simen wanted to drive to the store and get some stuff, but I refused to let him move and called my dad instead. So now I've gotten him a care package, and he can stay on the couch until he's better. It might be the flu, so he just has to ride it out.

Aside from typing this post out, I'm reading to Svartpunkt. magazine and listening to the CD that came with it. It's a new Swedish magazine about dark alternative music. I saw Simon (Coalcandy) post about it on facebook a week ago, and immediately wanted to support it. So I got a subscription! I'll be getting the 4 issues plus a bonus issue for subscribers and be entered for giveaways. The magazine is like your ''proper'' magazine, glossy and pretty thick. Like I mentioned it includes a compilation CD, from what I can tell by all Swedish artists. Not sure if they're including one for every issue. The magazine is written in Swedish by the way, so if you wanna get it, you should either understand Swedish, or.. not care, haha. 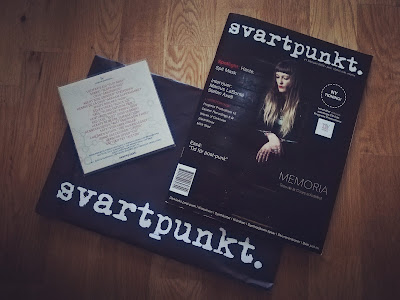 The magazine is only one of many things I've ordered for myself lately, so I might do a haul post soon! I've already posted some stuff on Instagram, so make sure you follow me there.
Posted by Caroline Åsgård Skulstad at 8:37 PM No comments: