Two years ago I published this masterpost of old school goth, post-punk and adjacent bands. Since then I've wanted to do the same for modern ones! So now I'm finally getting around to it. I'm not even gonna try to list every single band out there, since there is SO much good stuff coming out nowadays. I'm sure you'll find something new you like, and make you explore the modern goth scene even more!
Edit: Someone made a playlist out of all of the bands (minus 3) on this list, amazing! Check it out here. 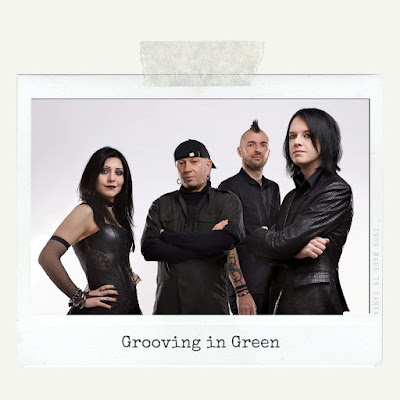 I think I'll stop there! There you have over 150 gothrock, deathrock, post-punk, darkwave, coldwave, synth, etc. bands formed after (or didn't release an album before) 2000. A lot of them are even after 2010! Hope you enjoyed and discovered something new. Feel free to comment names of bands I have missed!
Posted by Caroline Åsgård Skulstad at 7:38 PM 6 comments: 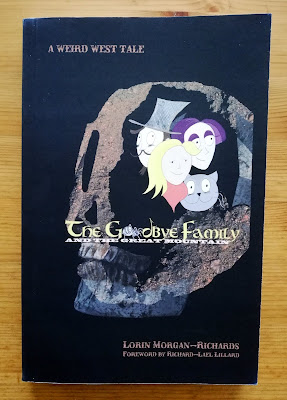 I received an email from the author who wanted to send me a copy of this book, and once I read what it was about, I immediately said yes! This is definitely up my alley, as I love spooky children's books. 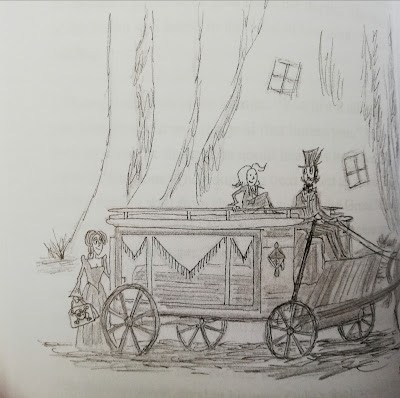 This book is about a family of undertakers; the mother Pyridine is a mortician and a witch, the father Otis drives the hearse and their daughter Orphie is a grave digger.
Their neighbors are turning into zombies, and since there are no bodies to bury, they're out of business. They decide to travel to the underworld through the cemetery in their backyard, and discover an evil plot they have to stop. 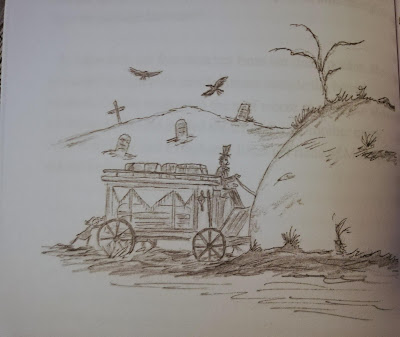 It reminds me of  The Addams Family and A Series Of Unfortunate Events, with sprinkles of Roald Dahl and a wild west setting. There's plenty of illustrations, the text is semi-big with lots of space, and it's around 250 pages. There are funny quotes like “Dreary afternoon, my progeny”, ''Oh my goth'' and ''For goth's sake''. There are some words that could be difficult for younger children to understand, and of course dark humor and spooky themes. So it really depends on the child, but I think it would be best for older children, and of course anyone who loves stuff like this. 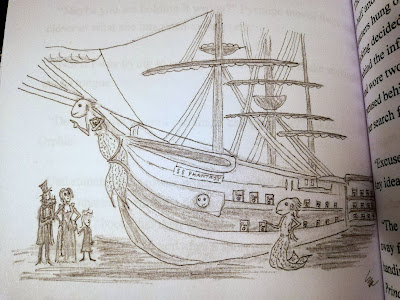 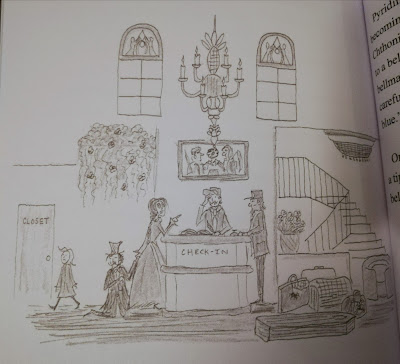 Lame title, I know. But I've gotten myself a bunch of things the past month or so, and thought I'd compile it all in one post and show it to you! I'll also include some party photos from this weekend at the end. 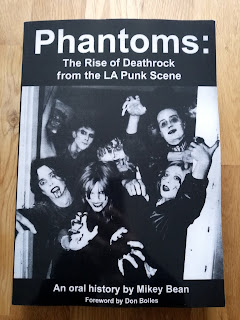 I'll show one book I've gotten. There are more, but this is the one I'm most excited about! It's a HUGE book about deathrock and it's origins. It's at least A4 sized and over 600 pages. I've made it our featured book in the book club I run on Gothy Discord, but I have no idea how long it'll take to read. I haven't read much in the past two weeks, but I've read a few chapters already. I will probably be posting a review when I finish it! You can buy it here. 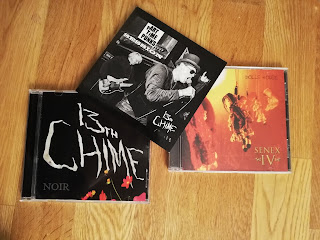 I ordered two CDs from 13th Chime's Bandcamp page, and they kindly sent me Senex IV's debut album as well! The latter is a new band which features two members from 13th Chime. It's not exactly a goth band, but it's really interesting. 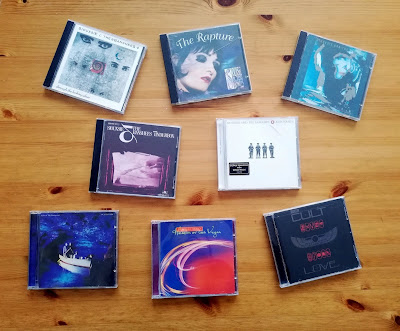 I bought all of these from a seller on Discogs. Lots of old goodies! While I prefer to support artists as much as I can, it can get hard when you HAVE TO order online to do so. Shipping, taxes and customs to Norway piles up to a lot, so it's rarely worth it to order unless you can get many from the same place. But at the same time I don't think there's anything wrong with thrifting music! It's fun to hunt, and a great way to grow your collection. When you do it online you can find specific albums you've been wanting for a long time but can't get where you live.

Note: With the situation around the world right now, I highly recommend supporting artists, especially smaller ones. They're losing a lot of money from having to cancel shows and tours, so buy their merch if possible, and digital music if you're into that! 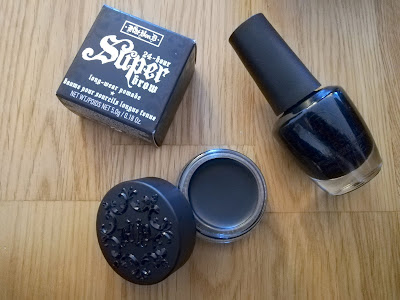 KVD Beauty just launched here in Norway, so I stopped by a make-up store and got myself a brow pomade. Lately I've just used eyeshadow, and even though that has worked fine for me, why not try something that might be even better. I've tried it once so far, and MAN, it's so smooth and pigmented! There are photos where I have it on further down in this post.
Also bought the first black nail polish I've owned in.. almost 3 years. I bought a purple one recently too, but it was super cheap, so it flakes off instantly, haha. This black one is so pigmented you only need one layer! It's not the best when it comes to flaking, but when I have every other nail black and purple, the black is definitely looking good in comparison. 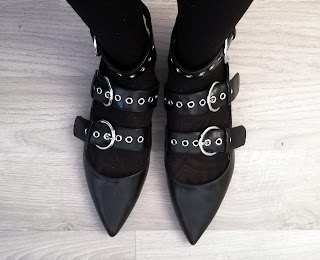 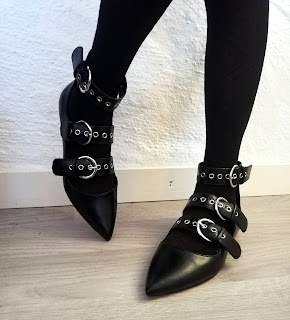 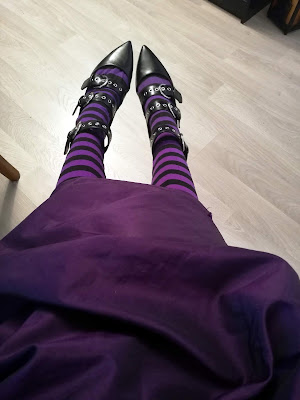 Just have to gush over these ADORABLE shoes! Got them second hand, I was SUPER excited to find a pair of shoes in size 35! I need at least that to wear dainty shoes like this. They fit me perfectly, and now I'm constantly wearing them around the house. Can't wait for summer so I can wear them out!

Also; I got cyberlox! A teenage dream has been fulfilled, and just at the right time! I don't own a respirator, I'm not really a fan of that look, but now I should have one, haha. I actually think the cybergoth look suits me! I've been a cybergoth on the inside for years, and now in the time of the toiletpapocalypse she's here! 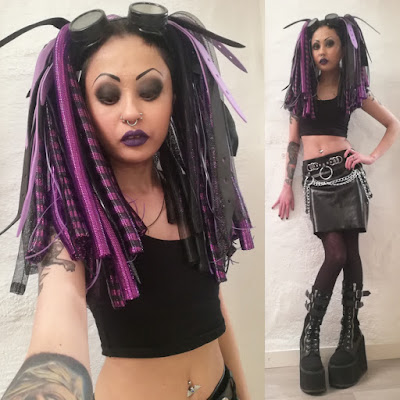 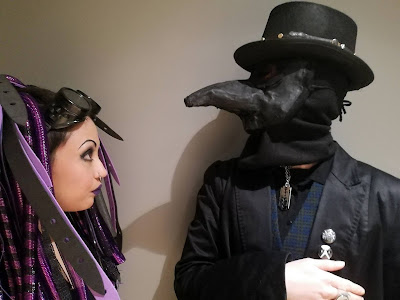 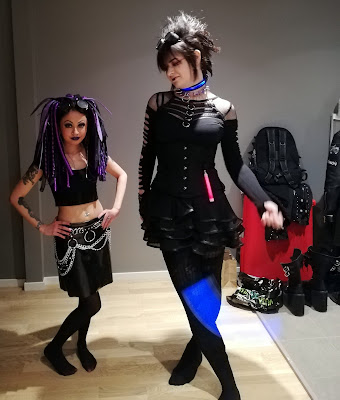 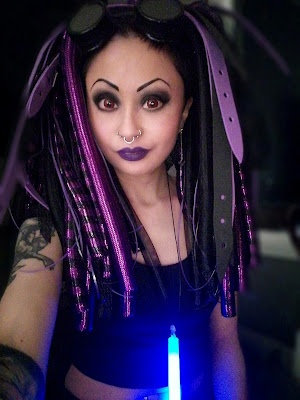 Our local goth night got cancelled because of the virus (Norway is very affected), so my friend decided to host the pre-party for the whole night. Thursday I was smacked in the face with so many cancellations and just Norway shutting down in general, so we wanted to have SOME fun before the entire world goes to shit! I hope everyone is doing okay out there. I'll try to get some reading done and write up some blog posts.
Posted by Caroline Åsgård Skulstad at 9:00 PM 2 comments:

So this was something that randomly happened in the middle of the night. Someone on Gothy Discord asked how you do this, and after I explained how, I remembered that one of my blazers had a bare sleeve, and I also happened to have a pair of white stockings that had started to get too ripped to wear. Let me take you through this late-night DIY journey! 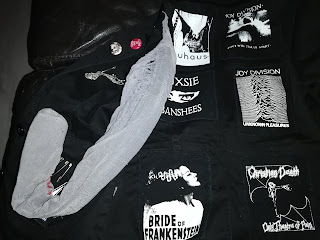 I first cut off the lace tops of the stockings, which I considered to sew onto the blazer as cuffs for a second, but decided against it. I kept them, there might be something else I'd like to do that to! If I was going to be a traditional bride, I could have used them as garters.
Anyway, I threaded the stocking over the sleeve to see if it was a good fit. The length was pretty much perfect, but it was a little tight. Either way I thought it would look nicer to cut it up more, plus get rid of the tiny red hearts going along the back of the stockings. 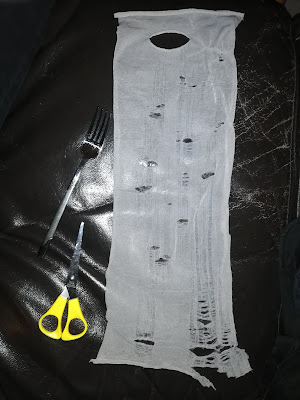 Here's the piece after cutting off the excess, and ripping it up a little. My favorite technique for stocking ripping is a fork, and then pulling. You then get smaller holes, but more runs, which is the look I prefer. Then I fastened one edge with a couple of safety pins around the shoulder seam of the blazer. I did a lot of playing with placement, pulling it around, and I cut into it a few places so there would be more ''air'' and I could stretch it even more. Basically treat it as you would when you decorate with cotton spiderwebs for halloween, and secure with safety pins! 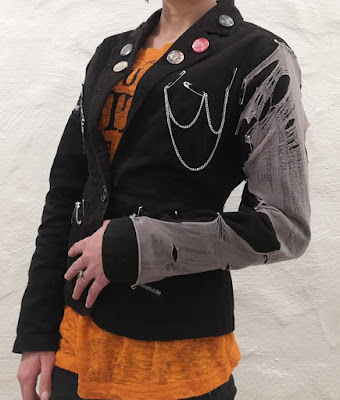 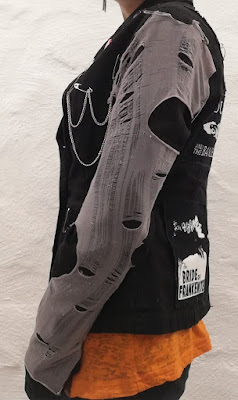 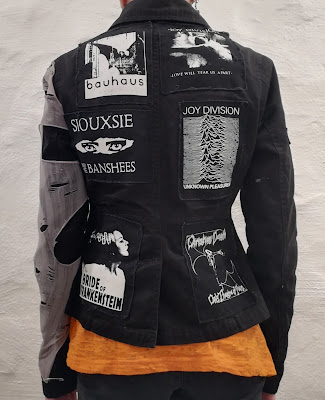 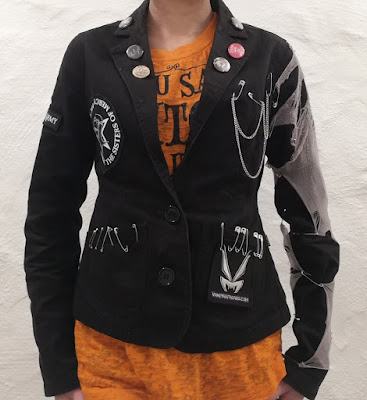 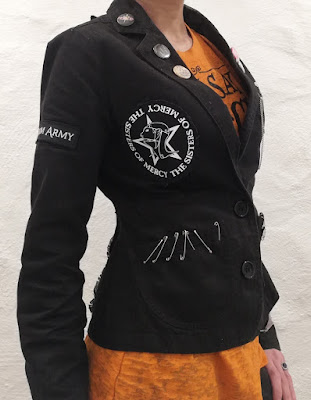 So there's the finished work from all angles, and a look at how the rest of the blazer looks. Those who have followed this blog since almost the beginning might remember when I made this! It's been.. 3 years now? The cool thing about garments like this is that you can update them over the years. Switch out pins / buttons and even patches, and just add whatever decor you feel like. Let them evolve with you!
Posted by Caroline Åsgård Skulstad at 7:00 AM 2 comments: