Someone on Gothy Discord recommended Alkemia Perfumes, and I checked them out immediately. They really remind me of Black Phoenix Alchemy Lab, which I've longed for for years, but it's just too expensive (particularly the shipping, $30+ for the cheapest option). Alkemia's shipping was less than half of that, so I decided to try them out! I selected five perfumes that intrigued me, and built my own sample set. 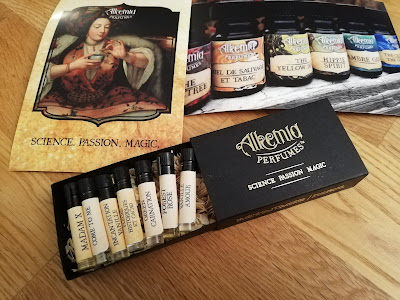 I got two extra samples, so I will review those too! The back of one of the cards says ''Your perfume has traveled some distance to be with you and like many travelers, it might need up to 48 hours to rest in a room temperature enviroment to return to its best.'' The package had been lying in our mailbox for about a day and a half, (and it's still pretty cold here), but I of course smelled them all immediately, and they were heavenly! When it was closer to 48 hours since they were brought inside, I smelled them again, and I couldn't believe how much better they smelled! Some of them changed a lot.

Let me just state that I have an incredibly strong sense of smell / sensitive nose, and I'm not knowledgeable on perfume and what scents I like. Nobody's experience with the same smells will be the same, and of course your natural body scent will change how it smells. So my experiences and opinions of these perfumes could be drastically different to yours.
Below are the photos that go with each perfume as well as their descriptions, and of course my thoughts on each one! Click each perfume name to go to its product page. 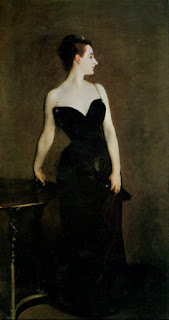 "There is no excellent beauty that hath not some strangeness in its proportion." - Francis Bacon

Madame X was John Singer Sargent’s most infamous painting. When it debuted at the Paris Salon of 1884, the public was horrified and called it a scandalously immoral image. The model was Virginie Gautreau, a New Orleans ex-pat who was notorious throughout Paris for her elegant demeanor and unusual looks which she accentuated by dusting her skin with a special pale purple powder. Her nose too long by accepted standards and her forehead considered too high, yet the total effect of her eccentric beauty was irresistibly seductive. Gentlemen were captivated. Society mavens sneered. Artists begged to be allowed to paint her portrait or sculpt her in marble. An American art student named Edward Simmons wrote of being “thrilled by every movement of her body."

My thoughts: My first impression is that this smells like a high-class lady. I don't think I can pick up an individual scent, it all blends nicely together. To me the smell stayed the same for hours, but it got fainter. When it had almost gone completely away, I thought I could smell the vanilla, maybe one of the other base notes. In conclusion: A very feminine perfume, kinda exotic. I imagine this going well with that fancy feel I get when wearing more victorian outfits. 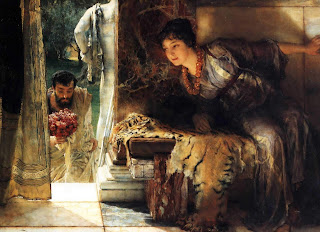 Come to Me Oil is a hoodoo conjure recipe of botanical and mineral elements designed to attract the attention and romantic interests of someone you want to bring closer to you. Some people use Come to Me oil to invite the universe to attract a new (unknown) lover or to help reinvigorate a relationship that's gone a little stale. There are many variations of Come to Me oil. Ours is designed for people who identify as female to attract either male or female lovers.

"Come live with me and be my love, And we will all the pleasures prove, That Valleys, groves, hills, and fields, Woods, or steepy mountain yields. And we will sit upon the Rocks, Seeing the Shepherds feed their flocks, By shallow Rivers to whose falls Melodious birds sing Madrigals." - Christopher Marlowe

My thoughts: Mmm, this smells like candy! Very fresh, kinda sharp, potent, but not too strong. I couldn't stop smelling my wrists, so it works on me, haha! I think this could definitely attract someone, it's heavenly and sweet. I noticed that it changed on me pretty quickly, I like it on me more than smelling the bottle. I felt like it gave off waves of itself, so I'd be careful with reapplying, cause it lingers. Also Simen agrees with me on it! Success. 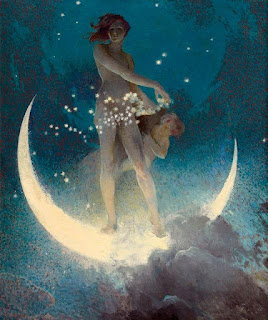 A bewitchingly spellbinding olfactory enchantment. Whispers of smoked frankincense and benzoin float across a tapestry of finely tanned Moroccan leather, Mayan vanilla, and black tonka. Like the ancient practice of wishing on the first star of evening, tonka is said to help one fulfill one's desires if you whisper your intention aloud as you apply it.

My thoughts: Exotic and enchanting, like a (magic) market in the Middle East or something. It really smells like old leather when exposed to air. I'm not a big fan of the leather smell. The vanilla and tonka showed up after maybe 30-40 minutes. After a couple of hours I thought I could smell the frankincense. It's not very strong, but when you smell it, it's a very.. ''full'' smell, I want to say. ''Warm'' too. I think this one could be suitable for men since it's not so sweet. Simen tried it, and it smelled better on him after a couple of hours, and even later the vanilla really came out! 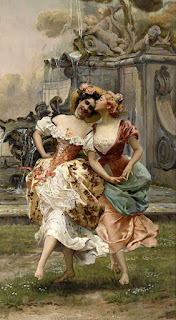 A historical recipe from the 1700's court of Versailles created by a mistress to delight a king. A paradox of the decadent and the divine - erotically dark cacao and uplifting French lavender blended with piquant black cardamon pods, a splash of tea with lemon peel, and an elegant flirtation of grapefruit blossom and vanilla musk.

Madame de Pompadour was a patron of the arts, science and literature. Her wit and intelligence were as seductive as her beauty and she is considered one of the three most powerful women of the 18th century, along with Catherine the Great of Russia (Catherine II) and Maria Theresa of Austria. Mme de Pompadour was known for creating the unique and the beautiful... the pompadour hairstyle is named for her, as are marquise diamonds, and it was whispered that the shape of the bowls of champagne glasses were created from the shape of her breasts.

My thoughts: In the bottle it smells quite sharp and is very strong, and I smell the cocoa ''high up''. On me it really smells like an old-timey perfume! It's really similar to something I think I smelled as a kid. Slightly sweet and fresh, I don't notice the cocoa on me. My mother-in-law smelled it on me and agreed on the "old-timey" smell, and said I'm "too young" to wear it, haha. I agree though! 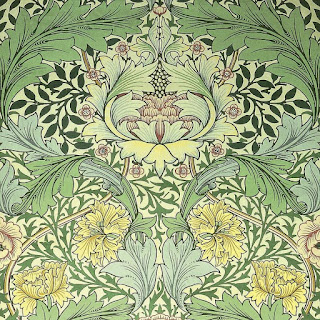 “But there are moments when one has to choose between living one’s own life, fully, entirely, completely - or dragging out some false, shallow, degrading existence that the world in its hypocrisy demands. ” ― Oscar Wilde, Lady Windermere's Fan

A naughty philtre of carnations, dianthus, absinthe, green patchouli, and bay rum. On 20 February 1892, Oscar Wilde asked one of the actors to wear a green carnation boutonniere for the first performance of his play Lady Windermere’s Fan. Wilde's friends were also invited to wear green carnations. Although he professed the green carnation meant "nothing whatever," it invoked many subversive themes - Irish nationalism, an homage to "La Fée Verte" also known as absinthe, and possibly the unnaturally colored carnation was Wilde’s way of making fun of a conservative society that viewed homosexuality as 'unnatural.'

My thoughts: Ok, while I picked this out myself, I'm still surprised about this! I couldn't pick up anything specific in the bottle, but once I applied it to myself I instantly smelled it. My first impression was ''green'' - in a good way, cause usually that wouldn't be something I like. Slightly flowery, but also fresh, I smell the absinthe and patchouli. I wanna say that I can smell leather, so I think this could be suitable for men. It's not strong at all, I think.
On Simen, once I put it on him it smelled like a plant store. It seems to be much stronger on him, and I think I like it better on him. So I'm probably right in this working for men! But no matter who you are, if you think this one is interesting, give it a try. 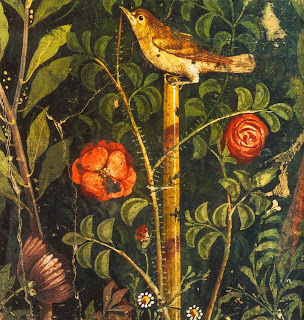 “I am a forest, and a night of dark trees: but he who is not afraid of my darkness, will find banks full of roses under my cypresses.”― Friedrich Nietzsche, Thus Spoke Zarathustra

Art: Pompeii roses in a fresco from the domus of the Golden Bracelet in Pompeii, mid–1st century C.E.

My thoughts: Warm, sweet.. forest. Usually I'm not a fan of most ''green'' smells (including flowers), but this one isn't bad. My skin invokes more of the forest smell, but after maybe 10 minutes I smell the rose. It makes it smell.. old? Like a fairytale? Or just fabric softener, haha. It's a fresh smell, it's just that it smells like it's an ancient recipe or something like that.
Simen tried it cause he likes forest smells, and IMMEDIATELY when he got it on, the forest smell just hit me in the face. WAY too much for me, but he owns a foresty perfume that is much stronger than this, so he doesn't think it's strong. After 10 minutes or so on him the forest faded and the rose showed up too. He describes it as ''a field at the edge of a forest''. I'd say this is pretty unisex. 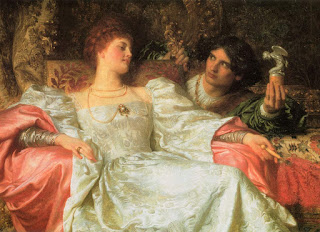 A beguilingly spicy, delightfully sexy blend of Madagascar and Tahitian vanillas and Tonka nestled in with a warm melange of ancient Ottoman trade spices (cardamon, ginger, and Grains of Paradise) reknowned for 'heating up' affairs of the heart and inspiring desire.

My thoughts: Very vanilla! When you open it, you get some of the spices. It reminds me of IKEA scented candles, haha. On me the vanilla is strong, Simen smells more spices on him. It's not very strong, but it lasts for hours. 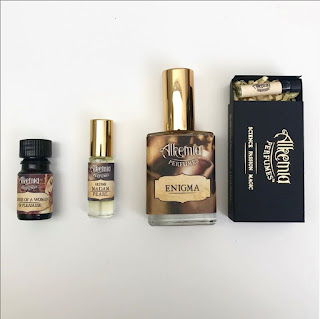 I love the sample box, great presentation there, and the bottles look good too. The bottles are secure (might be hard to open), but you do risk some spillage when you open them because they're corked and full. I think they're a pretty good size. While they seem tiny, these perfumes can be pretty strong, so these bottles are more than enough to figure out if you like them or not.

It's quite difficult to shop for perfumes without smelling them, that's why I went for samples. If you are familiar with what scents you like, but can't decide which perfumes you want (or don't want to go through everything they have) you can also order a custom made sample set! They have themed sample sets too.
In addition to samples they have the classic 5 ml amber bottle, 4 ml rollerball and 1 oz spray. If the perfume you're looking at says ''extrait'', that's regular perfume strength, if it has an option for ''ultime'', those are extra strong for those who need that. They even have alcohol free options too!
For US customers they are now selling sanitizing sprays, unscented or choose one of the two scents. There are different packages as well.

Their website is really neatly organized, so it's easy to find something you like. Gorgeous artwork that goes with every perfume, and descriptions that really lure you in. I love that they add some history to them.
Price wise I think they're pretty decent. I think the samples are pretty affordable, the regular sizes are decently priced and the 1 oz / 30 ml is at a normal price or even cheaper than other perfumes. They also have a special limited offer on 3 rollerball or amber bottles (3 extraits for $45, 3 ultimes for $60) right now, I don't know how long that will last. So what are you waiting for? Go check them out now! I will definitely shop with them again.
Posted by Caroline Åsgård Skulstad at 8:50 PM 1 comment: